Trump Slashing HealthCare.gov Advertising This Fall by 90%. Here's What That Looks Like.

via Sarah Kliff of Vox.com:

The White House will also cut the in-person outreach program by $23 million.

Trump will reduce Obamacare advertising spending 90 percent, from the $100 million that Obama administration spent last year to $10 million this year. It will also cut the budget for the in-person enrollment program by 39 percent.

Administration officials cited “diminishing returns” from outreach activities. In a phone call with reporters, they said that most Americans already know about the Affordable Care Act.

As a reminder, here's what happened back in January, when Trump pulled the plug on advertising for HealthCare.Gov in the final, critical week of the 2017 Open Enrollment Period: 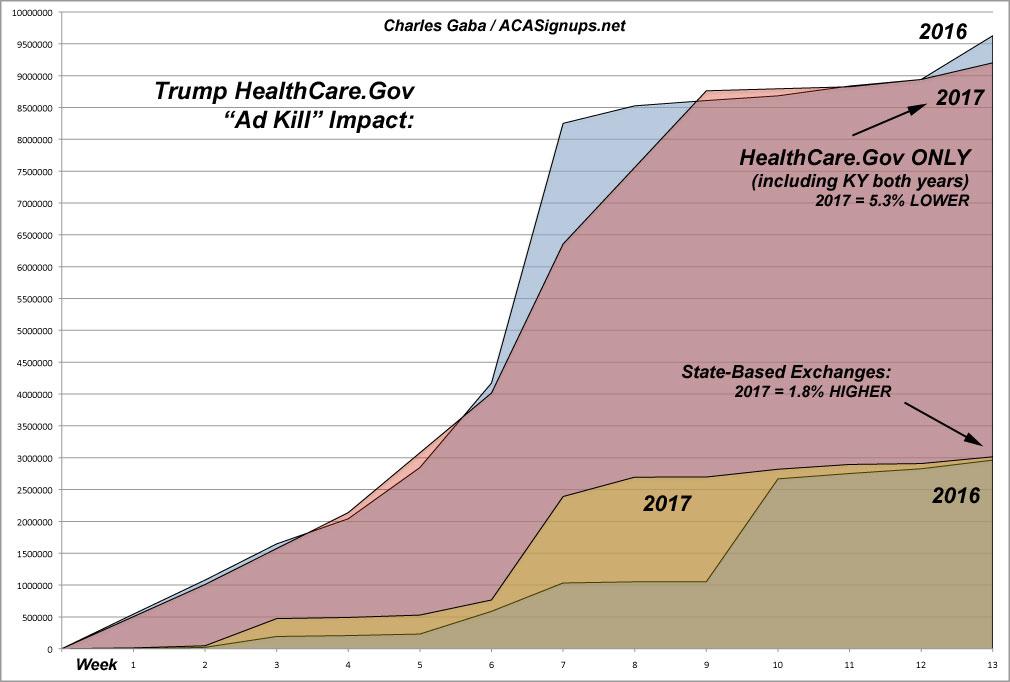 To recap: Enrollment on the federal exchange was running neck and neck, or even slightly ahead of 2016's Open Enrollment Period, right up until the final week (the discrepancies in Weeks 7 & 8 are due to the timing of autorenewals being different this year)...right up until the final week, when instead of the usual last-minute surge, there was only a nominal bump, resulting in a net decrease of 5.3% year over year.

But wait, you say, perhaps that was to be expected; maybe the normal "last-minute shopper" crowd was simply turned off by the premium hikes this year?

If the 5.3% drop was consistent across every state I'd say you might be right...but look at the performance of the 12 state-based exchanges...which have their own branding, marketing campaigns and advertising budgets. In those states, 2017 enrollment increased by 1.8% year over year...and that doesn't even account for the fact that New York's Basic Health Plan program, which ramped up bigtime this year, effectively cannibalized several hundred thousand potential exchange enrollees. If you include BHP enrollees in NY and Minnesota, the state exchanges saw a net increase of 10.6% over last year. Alternately, if you disregard New York altogether, the other 11 states saw a net increase of 3%. 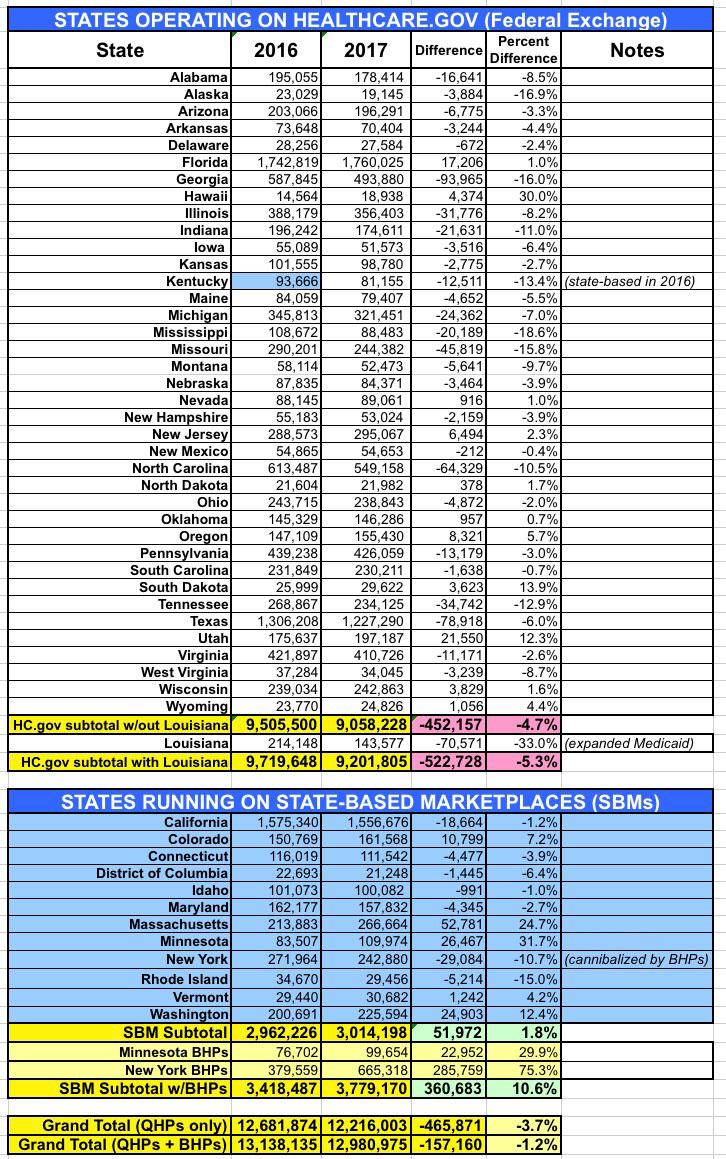 In short, I'm pretty sure that if the Trump Administration hadn't yanked advertising and issued "Obamacare is dead!!" pronouncements in the middle of the critical final week, HealthCare.Gov enrollment would likely have been at least 500,000 - 600,000 people higher. There's no way to prove that, of course.

Between this move, slashing the period in half (from 13 weeks down to 6), the CSR mess and other sabotage moves like potentially not auto-renewing current enrollees, this November's Open Enrollment Period is gonna be one hell of a mess, that's for sure.

Hell, it's even conceivable that 2018 enrollment could end up being similar to or even higher than 2017 in spite of Trump/Price pulling out all the stops to kill it off.

At which point, of course, he'd almost certainly shift gears and try to take credit for "saving" Obamacare. You just know he'd try and do so.