“This is yet another failing report card for the Exchanges. The American people have fewer insurance choices and in some counties no choice at all. CMS is working with state departments of insurance and issuers to find ways to provide relief and help restore access to healthcare plans, but our actions are by no means a long-term solution to the problems we’re seeing with the Insurance Exchanges,” said CMS Administrator Seema Verma.

The CMS map displays point in time data and is expected to fluctuate as issuers continue to make announcements on exiting or entering specific states and counties. It currently shows that nationwide 47 counties are projected to have no insurers, meaning that Americans in these counties could be without coverage on the Exchanges for 2018. It’s also projected that as many as 1,200 counties - nearly 40% of counties nationwide – could have only one issuer in 2018. Currently, for 2018 at least 35,000 active Exchange participants live in the counties projected to be without coverage in 2018, and roughly 2.4 million Exchange participants are projected to have one issuer.[1] It’s expected that the number of consumers with no coverage choices will rise.

...The Department of Health and Human Services (HHS) is committed to doing everything permitted under current law to provide patients with immediate relief from damage the Exchanges has done to the individual and small group health insurance markets. HHS actions are intended to stabilize the markets, increase choices, and lower costs. You can learn more by visiting hhs.gov/relief. 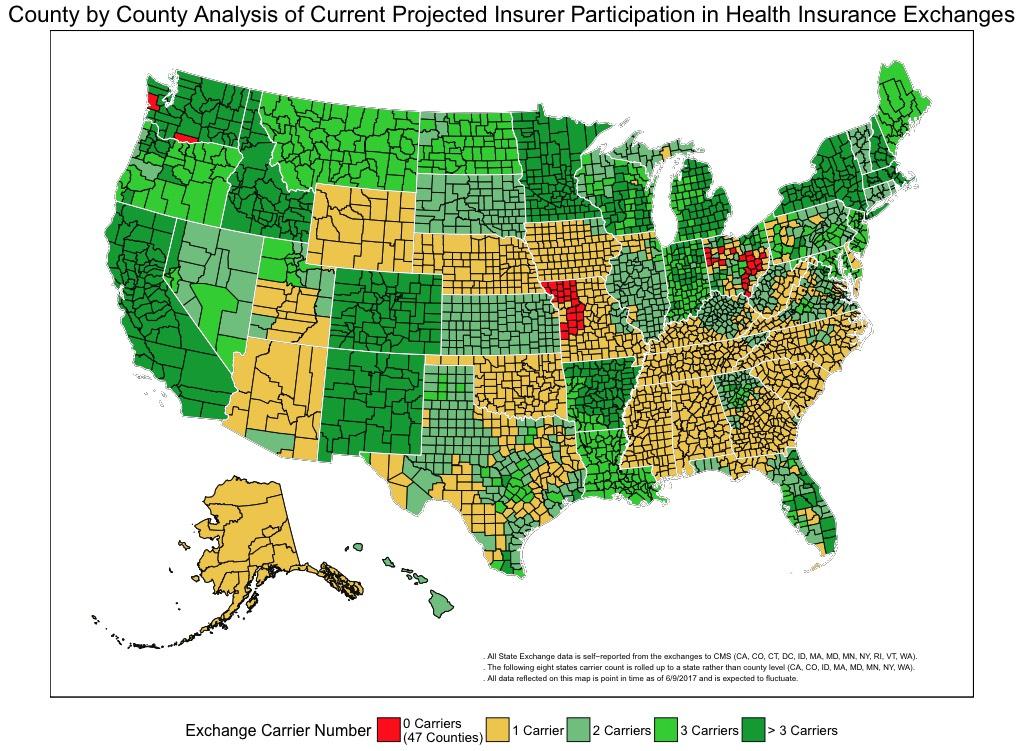 OK, fair enough; this is exactly the sort of trend I've been warning was likely to happen for months now, given the massive Trump/GOP sabotage effort.

Except a funny thing happened since that press release came out...

And just today, Oscar announced that they're expanding further yet next year:

Oscar Health will expand its Obamacare footprint in five states, adding Nashville, Austin and return to New Jersey to sell health plans on public exchanges under the Affordable Care Act.

The announcement Wednesday by the New York-based startup is good news for its existing customers in New York, California and Texas and a new choice for people in New Jersey, Ohio and Tennessee. Oscar is expanding at a time larger players like Aetna, Anthem, Humana and UnitedHealth Group scale back their Obamacare business and President Donald Trump regularly says the market is “imploding” or in a “death spiral.”

“We're excited to announce that we’ve filed to expand our diversified set of health insurance products into or within five states in 2018: Ohio, Texas, New Jersey, Tennessee, and California,” Oscar CEO Mario Schlosser said. “We've also filed to continue selling Oscar for Business and Oscar for individuals and families on and off the exchanges in New York in 2018.”

Don't get me wrong, things are still looking dicey for many counties, and could easily get worse as today's filing deadline passes and further announcements are made between now and November 1st...but this is a surprisingly positive turn of events.

CMS knows that exchange participation changes from week to week or even day to day around this time of year; the only reason to push out such a negatively-slanted "participation map" this early in the process is because they're trying to help cram the AHCA through the Senate; a press release like this gives the GOP some talking points to rally around even if some of them were disproven just hours after the release went out.

UPDATE: Annnnnnd literally moments after I posted this, Anthem BCBS announced that they're mostly pulling completely out of Wisconsin and Indiana next year:

Big health insurer Anthem — which already had announced plans to effectively depart Ohio's Obamacare market in 2018 — said Wednesday it will almost completely exit such markets in Wisconsin and Indiana in 2018.

Anthem, as it did with its Ohio pull-out, blamed a "volatile" market for individual health plans, as well as "uncertainty" about the federal government's stance on Obamacare's rules and regulations.

The insurer also said it was worried about whether the Trump administration will continue paying insurers billions of dollars in reimbursements for subsidies that reduce out-of-pocket health costs to low-income Obamacare customers.

...The administration and Congress also have refused to make a long-term guarantee to continue paying the so-called cost-sharing reimbursements to insurers, without which insurers will have to significantly raise their premium prices.

The offer of those plans will allow Anthem to avoid a five-year ban on re-entering the individual health plan markets that is imposed on insurers who completely exit a state's Obamacare exchange.

As an aside: This is a stupid loophole. The ACA included this requirement in an attempt to prevent carriers from constantly jumping in and out of the exchanges from year to year, but as you can see, it's woefully ineffective. This is another reason I believe any carrier participating in the individual market at all should have to offer the same policies both on and off-exchange...and better yet, require them to be offered on-exchange only, the way DC does.

Anthem currently sells Obamacare plans in 14 states. So far, it has announced plans to almost completely pull out of three of those states in 2018, and it is not clear how many states Anthem may depart.

..."Today, planning and pricing for ACA-compliant health plans has become increasingly difficult due to a shrinking and deteriorating individual market, as well as continual changes and uncertainty in federal operations, rules and guidance, including cost-sharing reduction subsidies and the restoration of taxes on fully insured coverage."

...Larry Levitt, an Obamacare expert at the Kaiser Family Foundation, said, "There is no question that Anthem has soured on the marketplace, given underlying instability and the tremendous uncertainty stoked by the Trump Administration and the health-care debate in Congress."

UPDATE 6/21/17: MDwise is out of Indiana next year as well, and once again, CSR uncertainty is one of the root causes:

A stable insurance market is dependent on products that create value for consumers through the broad spreading of risk and a known set of conditions upon which rates can be developed. We are pleased that some steps have been taken to address the long term challenges all health plans serving the individual market are facing, such as improving the eligibility requirements that allow consumers to purchase a plan outside of open enrollment and improved risk adjustment. However, the Individual market remains volatile, making planning and pricing for ACA-compliant health plans increasingly difficult due to a shrinking and deteriorating market as well as continual changes and uncertainty in federal operations, rules and guidance, including cost sharing reduction subsidies and the restoration of taxes on fully insured coverage.

UPDATE 8/24/17: OK, I haven't kept this entry up to date in over two months, but it appears that in the end, every single county in America will indeed have at least one ACA exchange carrier after all:

Two months ago, things looked dire for Obamacare — and not just because Republicans in Congress were still hell-bent on repealing and replacing it. Nearly 50 counties across the United States lacked any insurers willing to sell plans on the law’s marketplaces in 2018, leaving almost 40,000 people at risk of having no options for coverage next year.

But now, after reports in the past 24 hours that the last two empty counties in Ohio and Wisconsin would be filled, the problem is gone: No counties currently lack health plans for next year.

The law seems to have healed itself, or at least staved off disaster, even as President Trump has been swearing that Obamacare would implode or threatening to nuke it himself.

What happened? It’s actually pretty simple: Obamacare provides significant federal assistance for many lower-income and middle-class Americans to buy insurance. It is explicitly designed to make coverage reasonably affordable for people, while requiring the government to pick up any excess costs.

That’s a pretty good proposition for any business.

So while Obamacare still has a monopoly problem — there are 1,340 counties, with 2.7 million customers, where only one insurer is available — its market hasn’t imploded. Instead, the design of the law itself seems to have helped bring it back from the edge. State officials also worked at the local level to provide coverage for their constituents.

“It shows how resilient the market is. The open-ended premium subsidies are an enormous carrot for insurers to go into underserved areas, even in the face of significant uncertainty,” Larry Levitt, senior vice president at the Kaiser Family Foundation, told me. “It's not a great outcome to have monopoly insurers, but it's a whole lot better than having no insurers.” 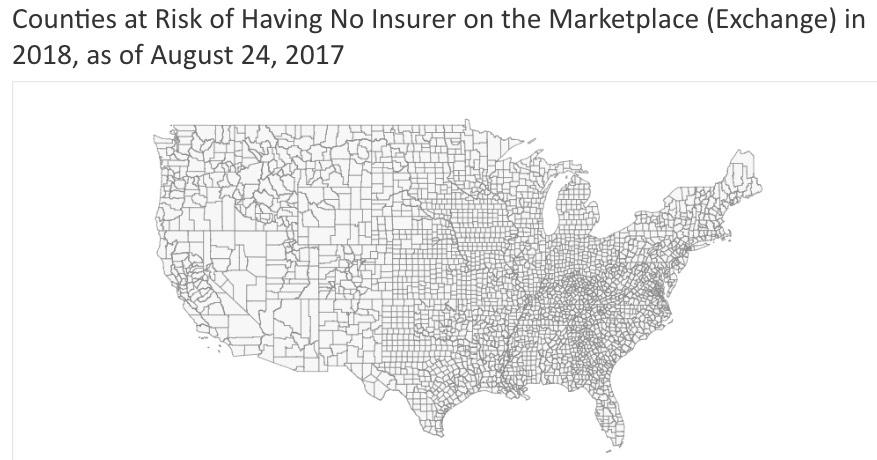