(sigh) OK, this is getting very confusing now.

The good news for me out of Maine is that they've released the filings for all three individual market carriers for 2018 (Aetna has around 1,000 enrollees but they're leaving the individual market entirely), and all three include the exact number of current enrollees, making the average rate hike request simple enough on the surface: 21.2% for Anthem, 39.7% for Harvard Pilgrim (HPHC) and 19.6% for Maine Community Health Options (one of the few remaining ACA-created CO-OPs*), for a weighted average unsubsidized increase request of 25.2%.

*UPDATE: My mistake! I accidentally confused MCHO with Evergreen Heatlh of Maryland, which is in the process of converting itself from a Co-Op into a private carrier! Thanks to Louise Norris for the catch!

The bad news is that it's actually more complicated than that due to the Trump/GOP Sabotage Factor. As you can see in the filings below, Anthem's 21.2% hike assumes CSR payments will continue, which means their CSR #TrumpTax increase would be an additional 16%, according to the Kaiser Family Foundation, or 37.2% total.

According to an earlier article, Harvard Pilgrim also assumes CSR payments will continue next year, so their 39.7% doesn't include the additional 16% TrumpTax.

Maine Community Health Options, however, took the opposite approach, baking an anticipated 15 percentage point #TrumpTax into their 19.6% hike request. Note that according to their filing, this doesn't even include the CSR issue; the 15% figure is based primarily on weak enforcement of the individual mandate. They don't really mention CSRs one way or the other, so I don't know for sure whether they're assuming it'll be included or not, although they come right out and pin the blame on Trump in this article:

Community Health Options says lax enforcement of the Affordable Care Act’s individual mandate under the Trump administration is a major reason why it is seeking a 19.6 percent average rate increase for individual health insurance plans in 2018.

A spokesman for CHO, Maine’s largest ACA insurer, attributed the bulk of the cooperative’s requested premium increase to “an anticipated smaller, and sicker, pool of insureds” in 2018. Michael Gendreau said the relaxed enforcement of the ACA’s individual coverage mandate is to blame.

“The rate proposal for 2018 is a reflection of our most recent experience trended forward,” Gendreau said. “The individual market rates also incorporate within the forecast an increase in our rates due to the uncertainty of the marketplace, including the known non-enforcement of the mandate and the resulting expectation of a shrinking risk pool.

Apparently the carriers are going to provide some clarity on this soon...

Sen. Angus King, an independent, sent letters to Maine’s three ACA insurers on May 26 asking if uncertainty about the law’s future will end up raising the cost of insurance. King asked the insurers to submit a hypothetical rate comparison that accounts for price increases resulting directly from partisan efforts to undermine the ACA.

Last week, the insurers said they planned to respond to King’s inquiry after filing their rate requests.

...but in the meantime, it looks like the #TrumpTax scenario comes in at roughly 34.8% across all three carriers, vs. 19.2% without it. 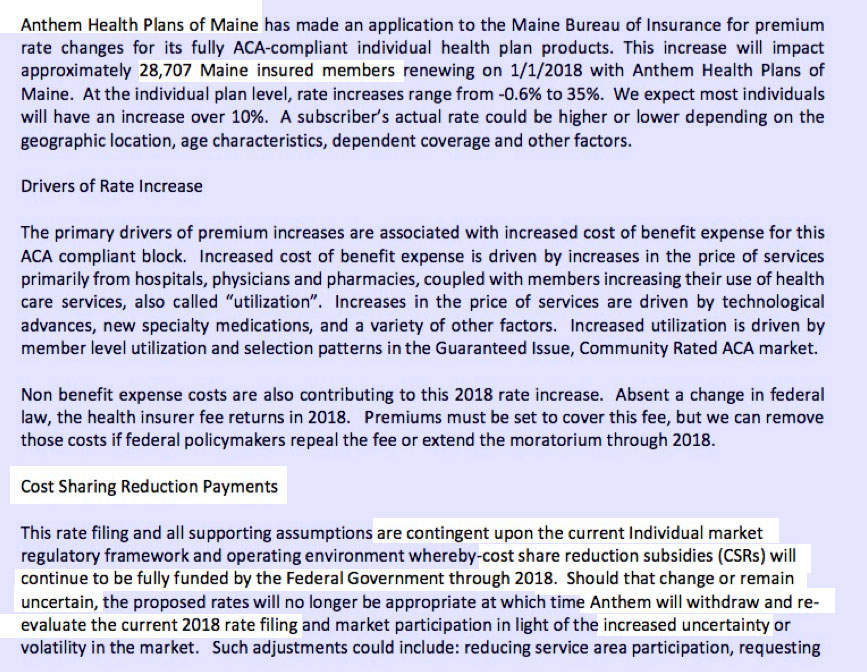 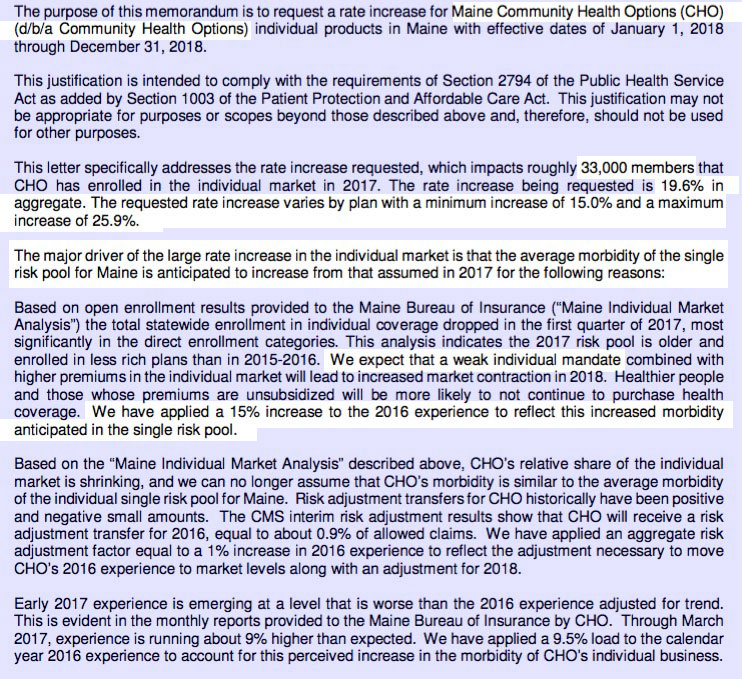 Meanwhile, in the Small Group market, I think the average increase is around 10.8%, but it's hard to tell because there may be a major chunk missing from the total. According to the same Press-Herald article as above, UnitedHealthcare supposedly is requesting a 5.7% drop in their small group rates, but I can't find the filing which also means I don't have an enrollment number to weight the average by:

UPDATE: I have to correct a miscalculation in the individual market above. While the Kaiser Family Foundation is indeed projecting a 16% average rate increase in Maine specifically tied to CSR payments, that 16% would only apply to Silver plans. Since only about 70% of Maine enrollees chose Silver, that would only be roughly 11.1 percentage points when spread out across all metal levels on & off the exchange, making the averages look more like this: