We're heading into the home stretch now, with the only remaining "supersize" state, FLORIDA. FL has the largest exchange-based individual market enrollment, and the 2nd largest total individual market enrollment of any state in the country, surpassing California for a variety of local economic/demographic reasons. The Kaiser Family Foundation estimates that FL carriers would have to add about 25% to their Silver plan premiums in order to make up for CSR reimbursements if Trump pulls the plug and/or Congress doesn't formally appropriate them. Since 80% of FL exchange enrollees are on Silver plans, that translates to roughly a 20% additional "Trump Tax" for the CSR factor alone. Note that while none of the carriers mention the CSR issue (meaning they all assume the payments will be made), Molina does call out the individual mandate enforcement issues as being part of their 37.5% rate increase request. Unfortunately, they don't put a hard number on this.

A few other important caveats: I'm not 100% certain about the enrollment numbers for BCBS or Health Options (in both cases I had to divide the number of Member Months by 12 to get an estimate), and the "1,000,000" for Florida Blue (aka Florida Healthcare Plan) is a rough estimate based on this Managed Care Magazine article which states, point blank, that "Florida Blue dominates the individual market, with nearly a 50% market share in 2017". That's not specific, but it's quite definitive. Since the total FL indy market is around 2.2 million people, and only a small portion of that is grandfathered or transitional, that means FL Blue should hold roughly 1 million even on the ACA market. As it happens, these estimates bring the statewide total up to around 2.15 million, which is pretty darned close to all of it.

Another big caveat, also for those three carriers: Each of them lists multiple average rate hike requests for multiple products (Bronze, Silver, Silver with Dental, etc), but none of them give an overall weighted average. I therefore had to run unweighted averages across all product categories, which may or may not be accurate but should be close.

Finally, three carriers (AvMed, Cigna and "Freedom Life") are only being offered off-exchange only, so the CSR issue isn't a factor for them anyway.

With all that in mind, it looks like Florida carriers are requesting average rate increases of around 15.5% if CSRs are paid, or 35.5% if they aren't:

UPDATE: Hmmm...ok, according to this official memo from the Florida Office of Insurance, it looks like the weighted average increase is actually 17.8%. This is likely explained by the fact that Health First Commercial Plans is missing from the list above. They don't seem to be listed over at RateReview.HealthCare.Gov, and while they are listed in the FLOIR database, I still can't find the actual average rate hike request or their market share. The CSR factor makes this extra frustrating: Assuming the other carrier enrollee numbers are accurate, even if Health First has, say, 100,000 enrollees, they'd have to be requesting something like a 65% average rate hike with CSR payments being made to achieve a 17.8% statewide average....assuming that 17.8% is based on CSR payments being made, that is.

Until I hear otherwise, I'll have to bump up my own estimates to 17.8% assuming CSR payments are made, 37.8% if they aren't. 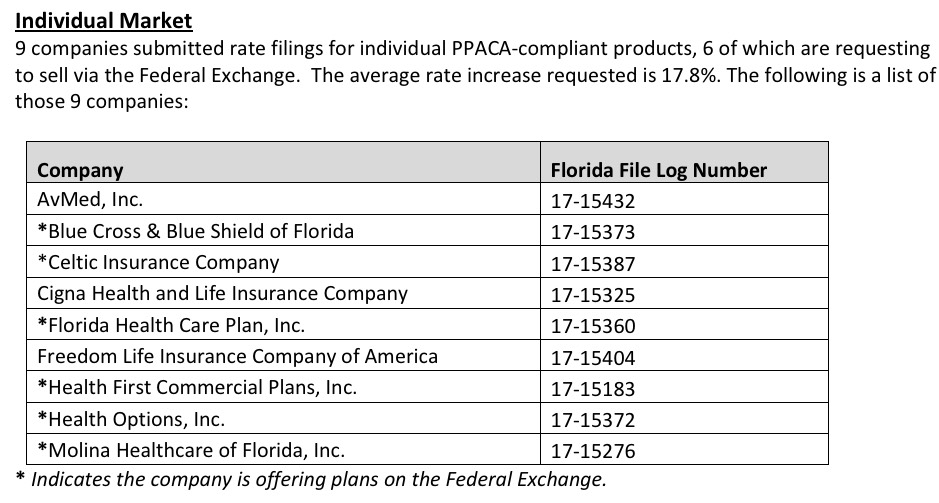 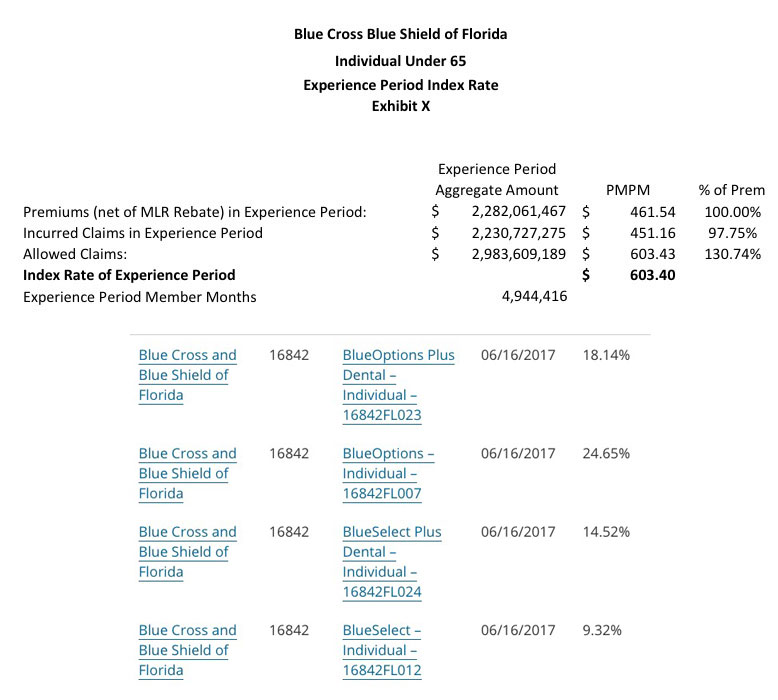 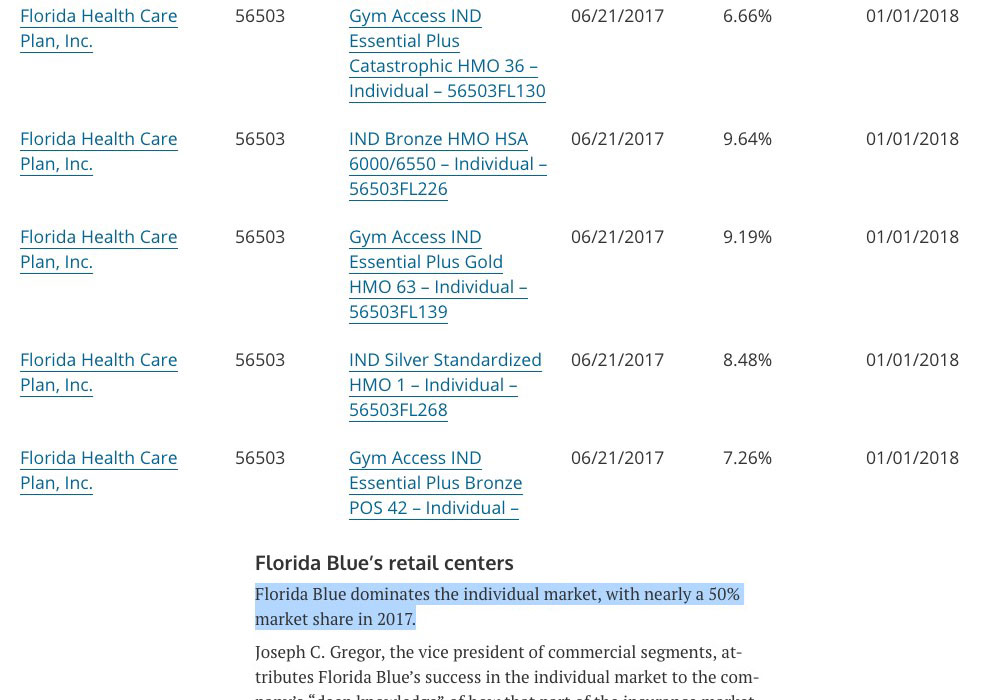 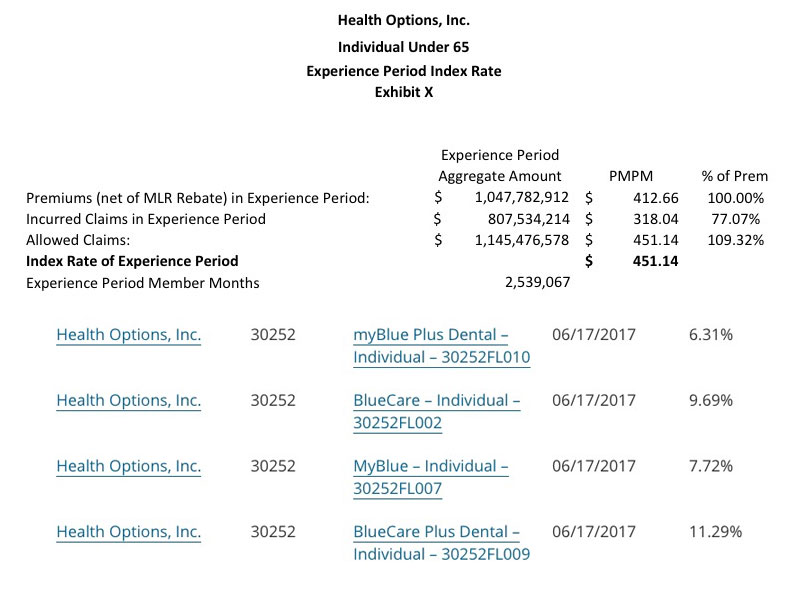 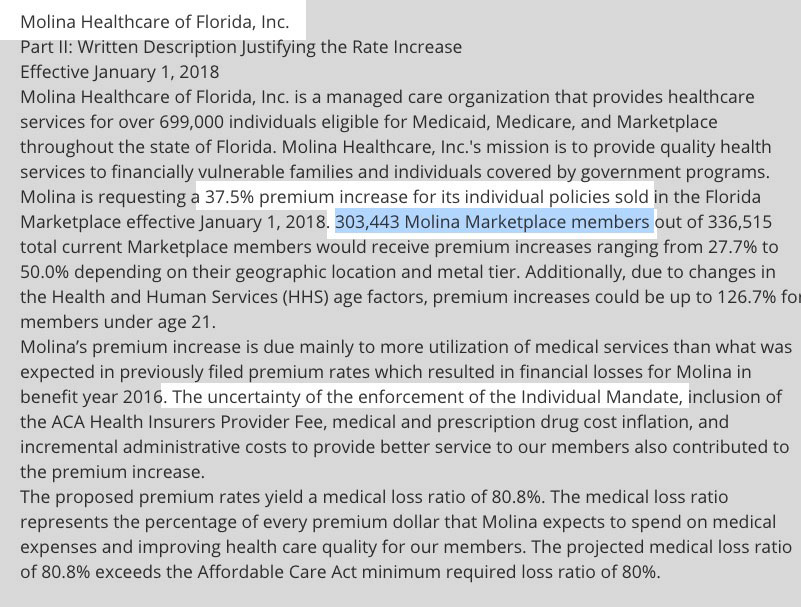