However, seeing how I went throught the trouble of whipping up a "Skinny Plan" graphic and everything, I might as well get some use out of it.

According to Timothy Jost of Health Affairs:

There is talk of the Senate ending up with a skinny bill that would simply repeal the individual and employer mandates and the medical device tax. The CBO has already scored pieces of this and it is possible that it would score such legislation as meeting mandatory deficit reduction goals. The bill would then go to conference with the House in secret and be brought back to the Senate floor for a final vote. Who knows what the final bill would do.

The CBO scored "mandate repeal only" twice. Their more recent score, from last December, concluded that around 15 million people would lose coverage by 2026:

As I just wrote about the other day, scenarios similar to this have already played out in New York and Washington State, and the results weren't pretty:

CBO and JCT estimate that a repeal of the individual mandate also would result in higher premiums for coverage purchased through the nongroup market. Health plans in the nongroup market would still be required to conform to the ACA’s rules for that coverage. Insurers could not deny coverage or vary premiums because of an enrollee’s health status nor limit coverage because of preexisting medical conditions. They would be permitted to make only limited adjustments to premiums because of age, tobacco use, and geographic location. Those features are most attractive to applicants who expect to have relatively high costs for health care, and CBO and JCT anticipate that repealing the individual mandate would tend to cause smaller reductions in coverage among older and less healthy people and larger reductions among younger and healthier people, thus increasing premiums in the nongroup market.

There's a difference here, however: New York and Washington State only included one leg of the 3-legged stool, whereas the "Skinny Repeal" scenario would include two legs...sort of:

The effects of such adverse selection, however, would be mitigated somewhat by other factors—including the marketplace subsidies (which make health insurance less costly and more attractive to younger and healthier enrollees who are eligible for those subsidies) and the annual open-enrollment periods in the nongroup market (which reduce the incentive for people to wait until they become ill to obtain coverage). Moreover, the available subsidies would greatly reduce the effect of premium increases on coverage among subsidized enrollees. CBO and JCT estimate that adverse selection would increase premiums for policies in the nongroup market, whether purchased through the marketplaces or not, by roughly 20 percent relative to premiums under current law. That change, in turn, would increase federal per capita costs for people receiving subsidies through the marketplaces.

In other words, as shown below, "Skinny Repeal" would retain all of the blue leg (carrier regulations) along with most of the green leg (financial assistance) and a small section of the red leg (the open enrollment period)...but would wipe out the individual mandate altogether: 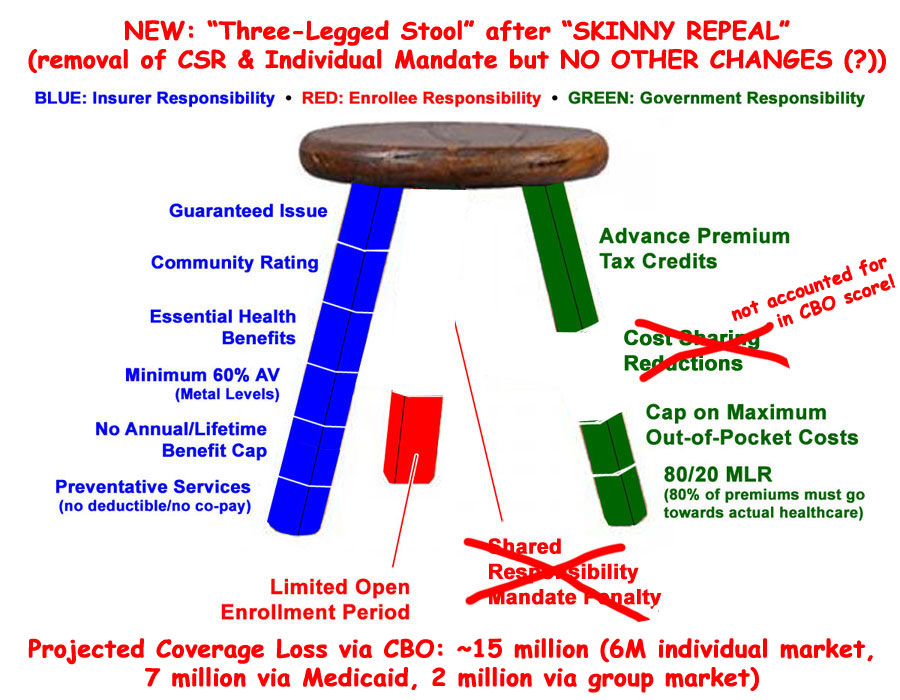 There's one other factor to consider here, however: Cost Sharing Reductions.

Again, the most recent CBO score was run back in December 2016, and assumes CSR payments will continue to be made. They kind of have to assume that, since CSR reimbursements are part of the ACA itself...the reason they're at risk is because of a Republican lawsuit claiming they haven't been specifically appropriated. Ironically, both the House and (prior) Senate repeal bills included explicit appropriation of CSR payments...but only for two years, after which they each killed the CSR program entirely.

The "Skinny Repeal" bill doesn't appear to include any CSR appropriation at all...and even if it did, even more ironically, the Senate Parlimentarian ruled that CSR appropriations can't be included in a 50-vote reconciliation bill...because (wait for it)...CSRs are already included in the ACA itself. Read that again.

Anyway, the point is that assuming "Skinny Repeal" were to actually pass and be signed into law as described above and CSR payments weren't made starting in January, the impact on the individual market could be even worse than the CBO projected last December:

In other words, killing CSR payments on top of killing the mandate would mean more people below 400% FPL would sign up...but fewer people above 400% FPL. You'd likely end up with almost 100% of exchange enrollees being heavily (and I do mean heavily) subsidized...but the unsubsidized individual market would be completely wiped out (as opposed to merely mostly wiped out, which is what the CBO is already saying would happen under "mandate repeal" anyway).

Again, for comparison, here's what happened to New York's individual market when they tried requiring Guaranteed Issue and Community Rating with nothing else (that is, about 2/3 of the blue leg, but none of the other two legs):

This article was from 2013, referring to the reduction in premiums thanks to the ACA. And no, that "$1,000/month" doesn't just refer to New York City; it appears to have been the average state-wide as of 2013...

...which is why the NY indy market had dwindled to just 17,000 people state-wide.

Nationally, keeping the APTC tax credits would keep the subsidized indy market from collapsing (it'd probably stay around the 10 million mark), but for the unsubsidized market, if you extrapolate this out: NY had 19.67 million residents in 2013, so 17,000 = 0.09%. Nationally, that would be around 260,000 people.

Obviously NY has different overall demographics than the nation as a whole, but even if you double that you're still talking about perhaps half a million unsubsidized enrollees nationally.

UPDATE: OK, the CBO has apparently put together a quick "mini-score" for a so-called "Skinny Repeal" option...though not necessarily the option, since as far as I know, there still isn't any actual legislative text just hours before they're supposedly going to have to vote on it.

It's important to note that this CBO score assumes that the bill in question would do the following:

....and nothing else. Of course, the GOP is already protesting that this is pure speculation, but again, of course it is, since they haven't bothered showing their mystery bill to anyone yet.

The numbers are indeed slightly higher as of 2026 than their December projection, atlhough it's my understanding that this still assumes CSR reimbursements would be made (and thus, it'd likely be another million or so higher than that yet). The most interesting parts to mare the 1 million projected to drop coverage this year...presumably people who really hate the mandate and would drop mid-year. Of course, that would wreak havoc with the 2017 risk pool, potentially doing so after 2018 rates have already been locked in by many carriers, meaning the carriers who've been reporting breaking even or making a profit this year would likely kiss that goodbye.

The mix is also different...they're projecting more of a negative impact on employer-based coverage but less on the individual market, and about the same for Medicaid loss. 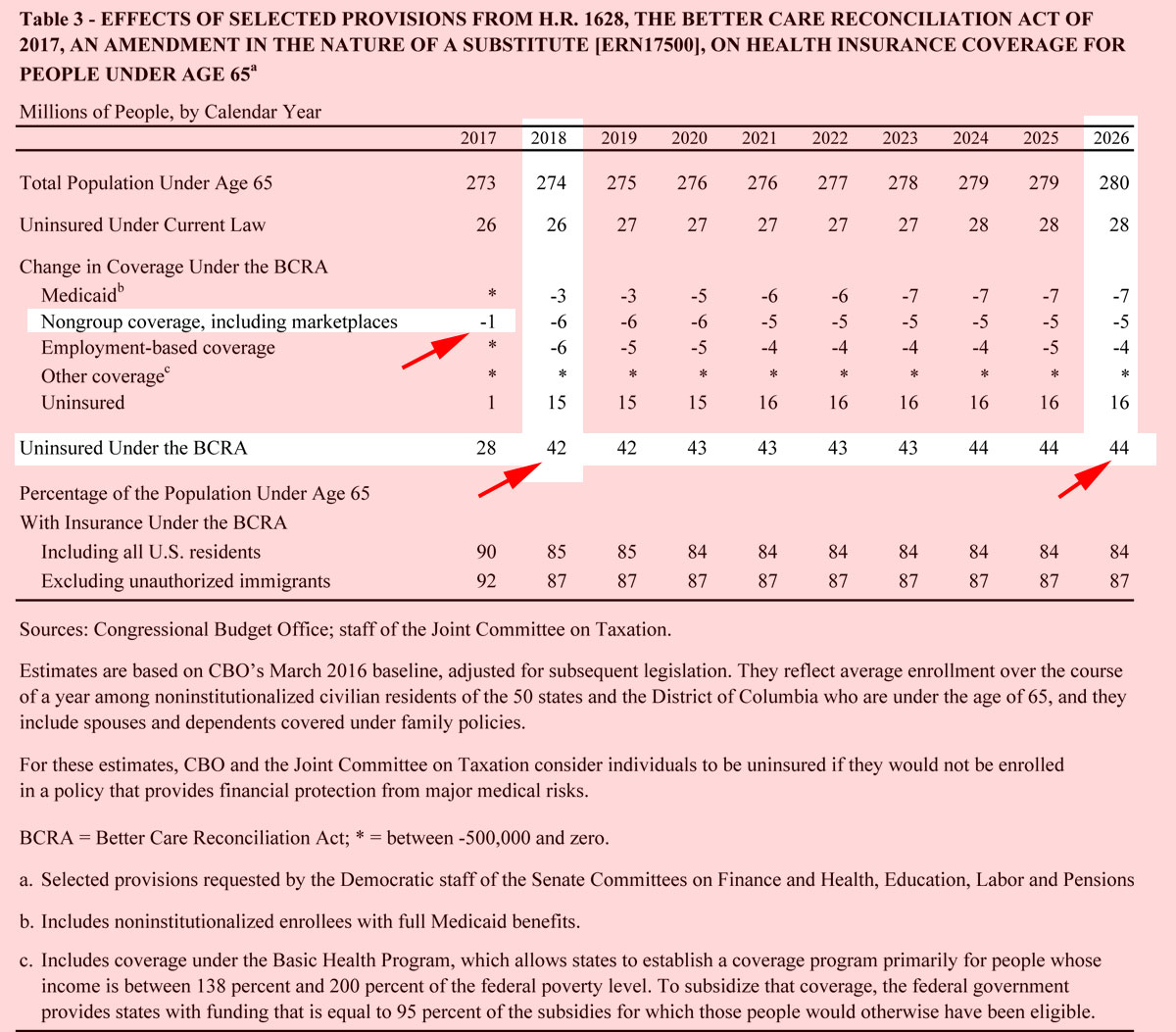 At first I assumed keeping the employer mandate would reduce the projected coverage loss by 4 million, but Loren Adler pointed out that a) the mandate would still be scrapped, just not right away (so the 2026 impact wouldn't change), and apparently they only expect about 500K of that 4 million to be due specifically to that--the other 3.5 million would mainly consist of people working for small businesses (companies under 50 employees, which aren't subject to the employer mandate anyway) dropping their employer coverage because of the individual mandate being repealed, some of whom would then shift to individual market coverage instead.

Confusing I agree, but I think this is what it would look like in practice: 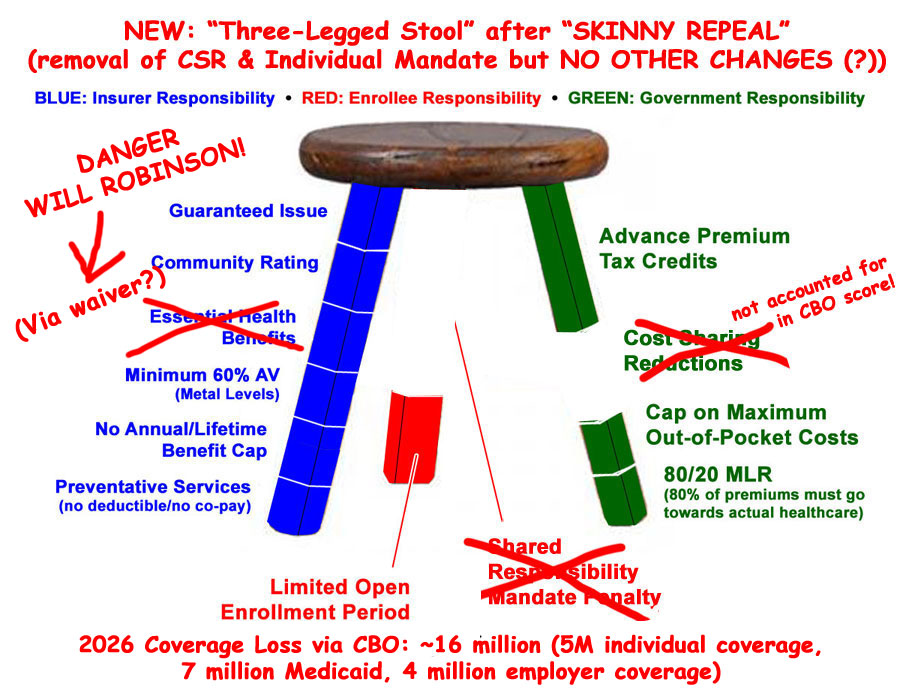