Sens. Jerry Moran (R-Kan.) and Mike Lee (R-Utah) announced Monday they intended to vote no on the “motion to proceed” ― a procedural step necessary to begin formal debate on legislation and, eventually, to pass it.

“There are serious problems with Obamacare, and my goal remains what it has been for a long time: to repeal and replace it,” Moran said in a statement. “This closed-door process has yielded the [Better Care Reconciliation Act], which fails to repeal the Affordable Care Act or address healthcare’s rising costs. For the same reasons I could not support the previous version of this bill, I cannot support this one.”

“We should not put our stamp of approval on bad policy,” he added.

Sens. Susan Collins (R-Maine) and Rand Paul (R-Ky.) said Thursday they wouldn’t vote for the bill in its current form, and more than a half-dozen other Republicans have said they have “serious concerns.”

OK, so Collins is a "no" vote from what passes for the moderate side of the GOP these days, while Paul, Moran and Lee are opposing it from the ultra-conservative side (full repeal only, etc etc).

But what, in the end, was the real deal killer? Ironically, all it took was Ted Cruz chiming in with his brainstorm:

In the last round of revisions, McConnell incorporated a major amendment from another conservative Republican, Sen. Ted Cruz (R-Texas). A goal of adding that amendment, which would have weakened those same insurance regulations, was to woo conservatives unhappy that earlier versions of repeal legislation left too much “Obamacare” in place.

...If the Cruz amendment isn’t enough to satisfy Lee, then the only way to gain his support (and perhaps Moran’s support as well) would be to weaken those regulations even more.

That would almost certainly alienate less-conservative members of the GOP caucus, many of whom have already warned that the bill takes away coverage from too many people.

OK, so what about the Serial Sexual Assaulter-in-Chief? What's his take on this latest development?

Republicans should just REPEAL failing ObamaCare now & work on a new Healthcare Plan that will start from a clean slate. Dems will join in!

Assuming BCRA/Trumpcare really is dead this time (and no, I'm not at all convinced that this is the case), there's one of two ways I suspect Trump will go:

Yes, that's right: There's an outside possibility that several million people could have their policies terminated as early as May 31st August 31st, 2017.

Of course, some carriers have already submitted initial 2018 filing request which tack on an average of 19-20% extra to cover themselves in case they don't receive the CSR payments which will be owed to them (along with another 4-5% to cover Trump/Tom Price's threats not to enforce the ACA's individual mandate), while others have already decided to bail next year in large part due to the CSR issue...but Trump actually pulling the plug on CSR payments would ensure even more carriers would do one or the other.

As for the immediate (August) plan termination prospects, that one is iffier. Every month that the CSR payments are made makes it less likely that carriers will immediately terminate policies if/when they aren't made, because they'd be risking having to eat an increasingly smaller reimbursement loss. That doesn't mean none of them would do so (remember, including the July payment, that's 6 months' worth of CSR payments that they'd have to eat...roughly $4 billion collectively), it's just 1/12th less likely than it would've been a month ago.

If any carriers do terminate immediately, they'd be hit with a legal and PR nightmare; their contracts with the government may include exit clauses, but most states have some sort of breach of contract/consumer protection laws on the books, so it'd get ugly...I could see class action lawsuits, horrifying stories of people cut off from their chemotherapy sessions halfway through, etc etc. On the other hand, for a smaller carrier (including the few remaining co-ops) without a lot of liquid cash, they may have no choice.

At this point, absolutely anything is possible. Gah.

NEW: The Senate is taking up full repeal with no replacement.

My statement on an upcoming vote to repeal #Obamacare pic.twitter.com/RdyDiUJfMD 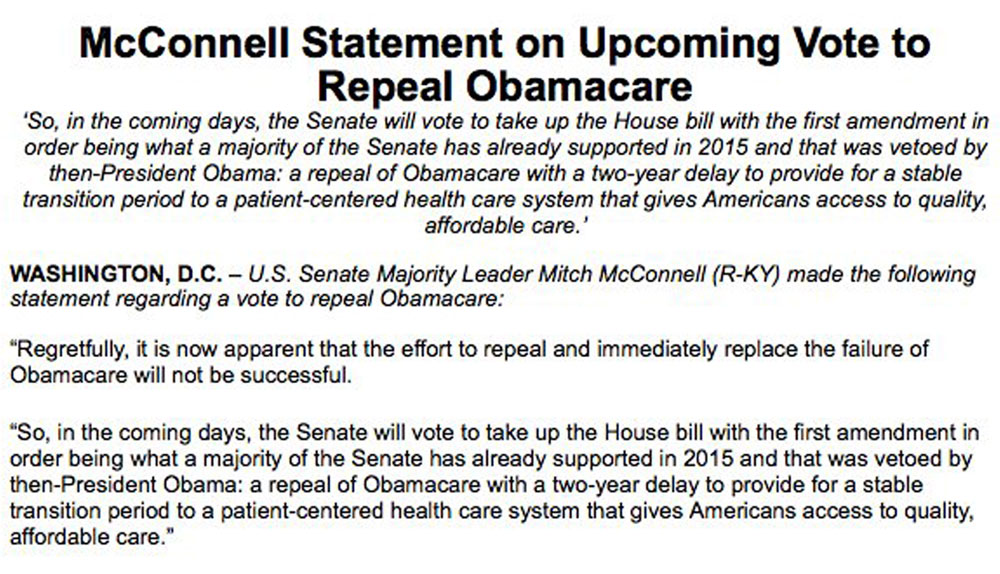