Note: The following notes are mostly cribbed from Larry Levitt of the Kaiser Family Foundation via Twitter, plus a few from other folks or tidbits I dig up myself...

via Topher Spiro of the Center for American Progress (sourced by Kimberly Leonard of the Washington Examiner):

via Margot Sanger-Katz of the New York Times:

Phillip Klein of the Washington Examiner has a list of all the protections the Cruz-Lee amendment would allow carriers to strip from off-exchange plans:

The source notes that the bill does not waive the requirement that each state have a single risk pool, meaning the exempted plans and the plans that have to meet Obamacare requirements will be part of the same risk pool.

NOTE: There seems to be some disagreement about this last point.

Honestly, I don't understand how they possibly could be kept as part of the same risk pool.

Via Dan Diamond of Politico: 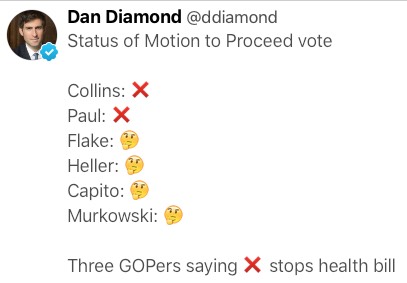 I should note that America's Health Insurance Plans and the Blue Cross Blue Shield Association, the two largest insurance trade groups, are appalled by the Cruz-Lee amendment: 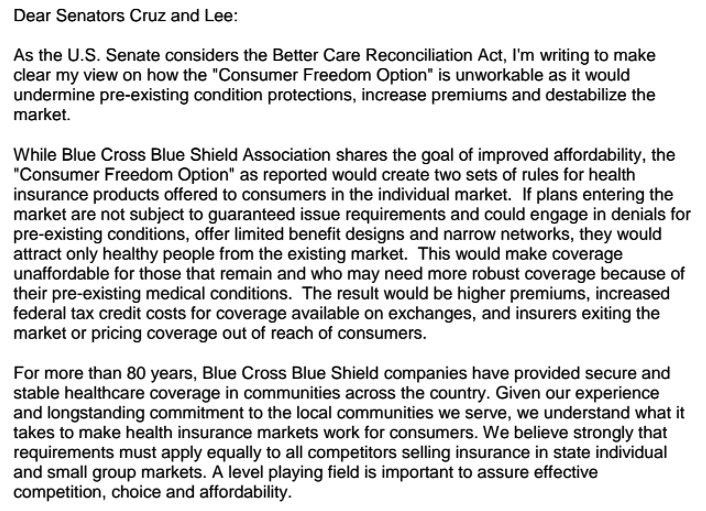 This one strikes me as being pretty significant:

Assuming this is accurate, that's huge.

Louise Norris points out that this is actually pretty much the situation for many people today, who are either uninsured at all, enrolled in Healthcare Sharing Ministries, short-term plans and so forth who have to wait up to 9 months to enroll during the Open Enrollment Period. HOWEVER, without the individual mandate in place and with BCRAP allowing health savings account funding to go towards noncompliant policies, a lot more people would be enrolled in them and find themselves screwed when things go south.

In addition, right now there are basically two coverage categories: Comprehensive...and everything else. Obviously some people will always be clueless about these things, but for the most part, people generally understand that they're either in a policy which has to cover just about everything...or they aren't. They may take the risk, but it's a binary choice.

Under BCRAP, there would basically be a third (or even fourth, or fifth?) tier of policies: Junk plans, "kinda-sorta" decent plans and comprehensive plans. And I guarantee you that people in the "kinda-sorta" decent plans are gonna be a lot less likely to grasp that if they get hit with something nasty, it won't be covered and they'll have to wait at least 6 months to switch to a full policy.

UPDATE: Oh, this is fun: It looks like rescission would also be back.

As my friend Laura Packard noted, the moment you bring back underwriting, you're pretty much guaranteed to bring back rescission. Remember that?

In other cases, it is illegal for the insurance company to do a rescission.

In a rescission, the coverage is removed from the beginning of the policy, leaving the patient liable for their costs incurred. Generally, they are refunded the amount of their premiums.

...Rescissions are prohibited (except for fraud and intentional misrepresentation of facts) under the Affordable Care Act by federal regulation 45 CFR 147.128: Rules Regarding Rescissions. It took effect for plan years beginning on or after September 23, 2010.

...Rescissions were often discussed in the development of health care reform, with many practices coming to light. Health insurance companies, in an effort to contain costs, would decide to drop coverage for an insured patient whose care was more expensive than they want to pay.

Once the patient became sick, the insurer would carefully review his or her original application for coverage, find (what they consider to be) a discrepancy, then claim the insured patient lied on his or her application. That gave the insurer legal permission to drop the claim. Some insurance companies developed software the triggered automatic fraud investigations for patients who received a diagnosis for a condition that would become high cost.

Problems developed for patients who have not intentionally lied on their applications, and for whom the insurer found discrepancies that didn't relate. For example, in a case in Texas, a woman's coverage was dropped after she developed breast cancer. The insurer rescinded her coverage by claiming she failed to disclose a visit to a dermatologist for acne, which was clearly unrelated.

Further problems developed for patients who paid premiums for a period time but then had their coverage dropped after they got sick. The insurer didn't bother reviewing the policy until after the person has been paying into the system. They collected money, but then would not provide their promised services. This "drop when you get sick" practice is now subject to the no-rescission clause of the Affordable Care Act.

Senate Republicans included a provision that exempts members of Congress and their staff from part of their latest health care plan.

This exemption could have the effect of ensuring that members of Congress have coverage for a wider array of benefits than other Americans who purchase their own coverage.

A Senate Republican aide confirmed that the exemption existed but was unable to comment as to the specific effect it would have. The aide said it was included to ensure that the bill hewed to the chamber’s strict reconciliation rules that limit the policies this health bill can include.

The exemption is similar to the one that existed in the House health bill. After Vox reported on its existence, the House voted to close the loophole — and the Senate aide expected their chamber to follow the same path.

The revised Senate health bill draft released Thursday lets health insurers offer plans that do not cover the Affordable Care Act’s essential health benefits, which requires insurers to include a wide array of benefits such as maternity care and mental health services.

Insurers can offer plans without these benefits — unless they’re selling coverage to members of Congress and their staff, who are required to buy coverage on the health law marketplaces. The exemption says this part of the law still applies to any plans sold to Congress.