Oregon was among the first states to publish the rate hikes requested by carriers for the individual and small group markets for 2018.

Their initial requests ended up boiling down to a weighted average of around 17.2% on the individual market and 8.2% for the small group market. At the time, however, I was still figuring out how to sort out the Trump Tax Factor: That is, the portion of the requested rate hikes which can be blamed specifically on 2 major factors: The GOP's refusal to pass a 64-word bill formally appropriating CSR reimbursement payments unless it's tied to the rest of their #BCRAP bill (and Trump's constant, public threats to cut off CSR payments altogether unless the #BCRAP bill passes); and Trump/Tom Price's ongoing threats/overt suggestions that they're not going to bother enforcing the individual mandate penalty at all.

Since then, in addition to my own compilation of hard breakouts by numerous carriers, there have been estimates by the Kaiser Family Foundation and Oliver Wyman which have confirmed that the CSR factor alone is reponsible for a good 19 points of the expected 2018 rate hikes on average, and that around 2/3 of total rate hikes can be pegged on the CSR & mandate penalty uncertainty in general.

For Oregon, without specific breakouts being provided by the carriers, I'm using Kaiser's estimate of 10 points being due to these GOP sabotage factors (or around 3/5ths of the 17.2% total), with the remaining 7.2 points being due to actual medical cost increases and the return of the ACA's Health Insurer fee.

A couple of days ago, the Oregon Dept. of Commerce issued a press release including the preliminary approved rate decisions for 2018. The final approved rates will be announced on July 20th, but these are likely to be very close to the actual numbers.

On the Individual Market, the only conclusion I can come to is that Oregon regulators appear to have decided to assume that CSR payments will be made next year one way or the other, and that the HHS Dept. will be enforcing the individual mandate penalty after all. I say this because of how much they're slashing most of the carrier requests...Providence asked for a 21% hike; OR is only authorizing 8.6%. Regence BCBS is asking for 18.7%; OR is only giving them 2.4%. And most eyebrow-raising, while BridgeSpan Health had requested a 17.2% rate increase, the Oregon regulators are telling them to reduce their existing rates by 1.6%.

UPDATE: D'oh!! I feel foolish...the OR Commerce Dept. explains exactly what happened right in their press release...they've instituted a reinsurance program, presumably along the lines of similar programs set up in Alaska and Minnesota:

Reasons for the rate changes include:
• The new Oregon Reinsurance Program. This program reduced individual market rates by 6 percent, and added a 1.5 percent increase to the small group market.
• Federal weakening of the individual mandate enforcement.
• Medical costs continue to rise, driven by increased use and the cost of new specialized prescription drugs.
• The cost of providing care continues to surpass premiums collected for many carriers.

Developed by the Governor and stakeholders and recently approved by the Legislature, the Oregon Reinsurance Program is designed to stabilize the individual market, reduce rates, and to encourage insurance companies to offer plans in more parts of the state. Reinsurance is a mechanism to spread the risk of high-cost claims so that no one carrier takes on a disproportionate share of this risk.

Approved rate increases didn't go down everywhere, however: Kaiser Health Plan asked for a 12.44% average increase, but OR regulators are telling them to increase prices more than that, by 14.8%.

I should also note that ATRIO appears to be pulling out of Oregon entirely: They've withdrawn both their individual and small group filings for next year. Then again, they have fewer than 100 small group enrollees and only a few thousand in the individual market, so this doesn't move the needle much.

The net result of the preliminary decisions and the reinsurance program: Assuming these are the final approved numbers (and all of the carriers accept them as opposed to bailing on the market), Oregon's individual market is only looking at weighted average unsubsidized rate hikes of 8.5% next year.

In spite of the press release stating that small group rates were bumped up 1.5 points due to the reinsurance program, the average approved increase is actually virtually the same as what was requested, despite some increases being bumped up or down a bit...8.2% overall. I presume this means that without the reinsurance program, regulators would otherwise have lowered small group rates by 1.5%.

In any event, Oregon looks like it'll be in relatively good shape next year despite all the craziness going on: 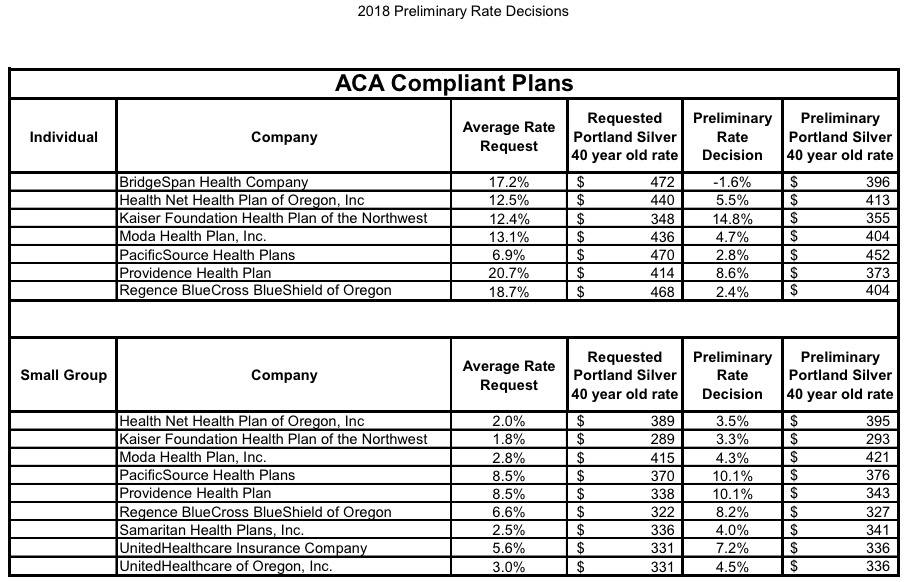