UPDATE: Some people are crediting me with creating the "3-legged stool" metaphor, which simply isn't the case; that credit goes to (I believe) MIT Economics Professor Jonathan Gruber, who came up with the metaphor back in 2006 while helping develop Mitt Romney's "RomneyCare" model for Massachusetts, which was the basis for the ACA's exchange model for the individual insurance market.

I'm simply expanding on the metaphor to explain some of the terms and concepts which are swirling around these days during the repeal/replace brouhaha.

I've written about the Three-Legged Stool before, but one thing which always bothered me is that the metaphor is a little too simplistic. No, you don't want to bog it down with a ton of detail when trying to explain the concept to people; that defeats the whole point of using a metaphor. However, keeping it too simple (Guaranteed Issue, Individual Mandate, Financial Help) also confuses many people who don't understand how vitally important some other concepts are, such as Community Rating, Essential Health Benefits and so forth.

Therefore, I've whipped up a color-coded version which breaks the metaphor out into more detail without (I hope) overcomplicating it. This helps demonstrate not just the positive aspects of the ACA but also where it falls short (literally), as well as helping explain why the GOP's replacement plans is such a mess (remember, this is all about the individual market only; Medicaid expansion, the large & small group market etc. are a different discussion).

As you can see, while the major ACA tenets do fall into 3 major "legs", each leg is actually composed of more than one section. The GREEN LEG (financial assistance) includes both Advance Premium Tax Credits (APTC), which most people know about...but also Cost Sharing Reductions (CSR) for those lower down the financial ladder. Most people weren't familiar with CSR until a few months ago, of course, when the GOP lawsuit (and Trump's public threat to cut off CSR payments) brought it up in a lot of headlines.

The ACA does have some major flaws which need to be addressed, and as I lay out in my "If I Ran The Zoo" post, one of them is that the APTC/CSR funding formula was simply too skimpy in the first place. Financial assistance cuts off at too low of an income level, and the formula means many of those near the cut-off point get pretty weak assistance. Raise the cap and beef up the credits below that and the situation would be greatly improved for millions of people.

The RED LEG is the one that no one likes...especially the Shared Responsibility Mandate penalty (aka the Individual Mandate tax). Again, the penalty baked into the ACA is simply too small--I know everyone hates the penalty, but if you're going to structure the system in this fashion, the penalty has to be higher or else many people will simply eat the tax instead of signing up for the policy. I seriously doubt this will ever be increased no matter what, however, as it's simply too politically unpopular for the Democrats to tackle a second time.

On the other hand, the GOP's AHCA bill, which claims to get rid of the much-hated Individual Mandate, actually just replaces it with their own version...a 30% premium surcharge (for a full year) having to be paid by people as punishment for not maintaining continuous coverage. Ironically, in some ways that penalty is actually more draconian than the ACA's $695 (or 2.5% of household income) is...but at the same time less effective, since a young, healthy person could go 10 years without getting covered without ever having to pay any penalty at all. Amazing.

The smaller secton of the red leg is the Open Enrollment Period...namely, the fact that most people are only allowed to sign up during a limited time window every year (6 months the first year, 3 months the past 3 years, and just 6 weeks this fall). Open enrollment periods are common practice at most corporations, as well as when it comes to making changes to your Medicare plan. The idea is to prevent people from gaming the system by waiting until they're sick/injured to sign up at any point during the year (thus avoiding months of premium payments) by limiting them to a narrow time window.

There's been a lot of concern, especially among insurance carriers, that the open enrollment period is being undermined by weak enforcement of it...that is, that too many people are taking advantage of Special Enrollment Periods (ie, signing up at other points throughout the year). I'm not sure how widespread this is, but it's a valid issue to look at.

The hot-button issue du jour, however, is the BLUE LEG...namely, the regulations on insurance companies mandating what has to be included in every healthcare policy they sell. This includes four major sections:

Now that the Republicans in the Senate are cobbling together their own version of the AHCA (which, from what I've heard so far, is apparently going to be pretty much the same dumpster fire, with slightly less garbage included), there seems to be a lot of talk about them keeping the Guaranteed Issue and Community Rating provisions (which is good if true)...but allowing states to opt out of the ACA's Essential Health Benefits (EHBs).

(Note: Cancer may not be the best example to use here, but it's the easiest for people to understand...substitute diabetes, or multiple sclerosis or bipolar disease or whatever if you prefer).

Personally, I'd say there's likely a fifth section of the blue leg which is missing from the ACA itself: Network Adequacy. That is, minimum robustness levels required for the number/type of doctors and hospitals a policy is accepted by. A policy doesn't do you much good if no one accepts it. I know that the ACA does address this issue to some degree, but many policies seem to be struggling with it as carriers shift from PPOs to HMOs. I don't know a whole lot about the regulations in this area, so I'm not including it in the graphic just yet even though I did want to at least make mention of it here.

In any event, part of the reason the ACA is having serious problems in some states is that, as noted earlier, the green and red legs appear to have been cut too short to begin with. These are both easily fixable...or would be if Congress would actually stop screwing around with the AHCA and fix the ACA itself by strengthening the legs.

UPDATE: Added two additional sections to the GREEN leg: The cap on maximum out-of-pocket costs, and the free preventative services which have to be included at no out-of-pocket cost to the enrollee, such as annual checkups, blood screenings, mammograms and so forth. I debated whether these should be listed here or as part of the "blue leg", but decided this one goes directly to "how much does it cost the enrollee" which is under the "green" leg. Besides, the blue leg is getting too crowded already.

UPDATE: Added No Annual/Lifetime Benefit Cap to BLUE leg: Insurers can no longer place a maximum yearly or lifetime dollar maximum on the claim amount. This is vitally important to people with extremely expensive conditions which could wipe out their lifetime limits in a few years or even a few months in some cases (there were instances of newborn babies maxing out before they even leave the hospital if they're in the neonatal unit for a month or so).

UPDATE 6/18/17: (sigh) A bunch of people have corectly pointed out that a 3-legged stool won't actually wobble if one of the legs is too short; it'll tilt or lean at an angle instead. One person even pointed out that technically speaking, removing a leg won't cause it to collapse, but instead to topple over, which seems to be splitting hairs, but whatever.

Also, I've thought it over some more and decided to move "Preventive Services" over to the Blue Leg after all. I've also added labels for each leg: The BLUE leg represents what the insurance carriers are required to provide; the RED leg represents the enrollee's responsibility (namely, just to actually sign up and to do so within a limited time window); and the GREEN leg represents financial assistance to help pay the premiums/out of pocket expenses.

UPDATE 6/25/17: I've added one more important section to the Green Leg: The 80/20 MLR rule, which mandates that carriers have to spend at least 80% of premium payments on actual healthcare costs as opposed to corporate overhead/profits/etc. 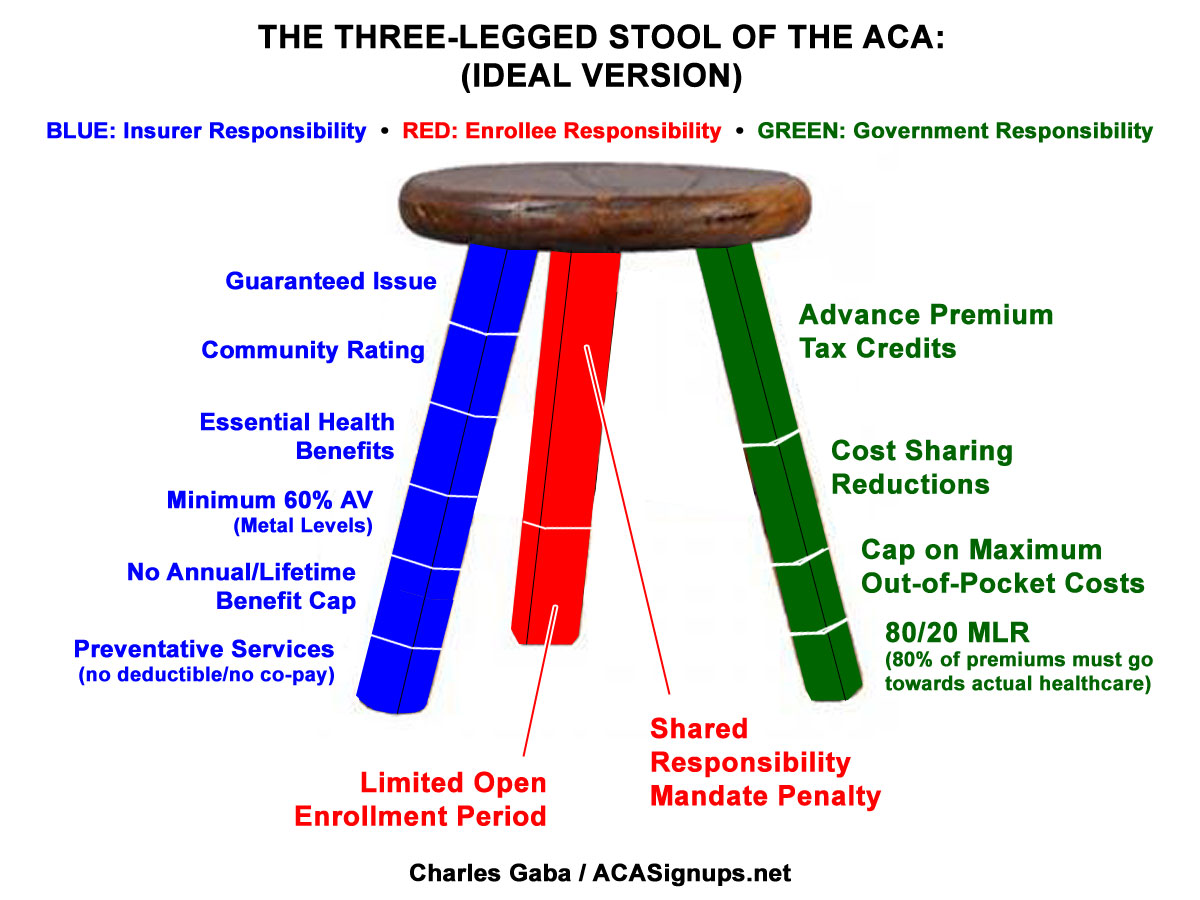