The other day it looked like the GOP Senate's BCRAP bill was going to take a hatchet to all 3 legs of the ACA's "three-legged stool", by getting rid of some provisions outright (CSR assistance and the Individual Mandate), weakening and slashing others in half (premium tax credits) and, most cynically, allowing virtually open-ended waivers which would allow individual states to wipe out many others (essential health benefits, minimum AV ratings, annual/lifetime benefits and the ACA's cap on maximum out of pocket costs). Here's what I figured this would make the "stool" metaphor look like: 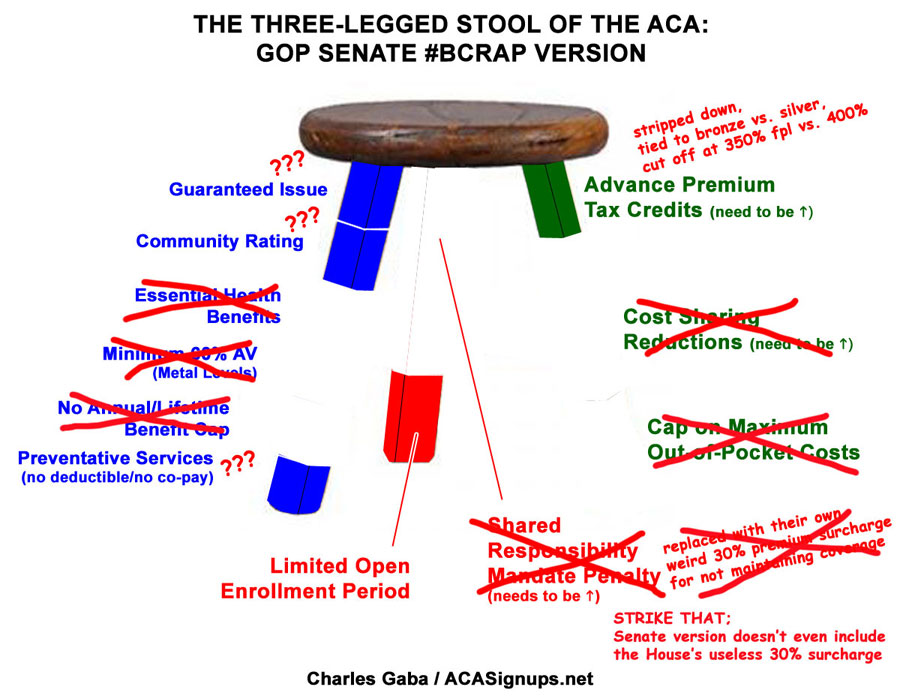 Instead, it turns out that the Senate is going to slip their own version of the Individual Mandate Penalty right back into the mix after all (they just won't call it a mandate):

Senate Republicans are expected to revise their health bill early next week, adding in a provision that could lock Americans out of the individual market for six months if they fail to maintain continuous insurance coverage.

Health insurance industry sources familiar with the plan say the change could be announced as early as Monday.

The six-month waiting period would fill a big policy gap in the current Better Care Act, which requires health plans to accept all patients — but doesn’t require all Americans to purchase coverage, as the Affordable Care Act does. Experts expect that this would cause a death spiral, where only the sickest patients purchase coverage and premiums skyrocket.

But the six-month waiting period could also complicate the Senate Republicans’ repeal efforts, because it may run afoul of the chamber’s complex reconciliation rules. Republicans are using what’s called “budget reconciliation” to pass their health care bill with a bare majority of 50 votes and avoid a Democratic filibuster. But the rules governing reconciliation restrict what policies the GOP can include in their bill — the waiting period is one of the provisions thought to be in doubt.

Of course, they're adding this back into the bill after sending the original version over to the Congressional Budget Office. Why didn't they include it in the first place? Possibilities include: a) They honestly forgot about it (whoopsie!); b) they knew it wouldn't pass the reconciliation rule process (then changed their minds); or c) they want to discredit the CBO by allowing a really crappy score to be released, then they get to say "but that wasn't the final version!" the next day. I think you can guess which of these I think is most likely.

In any event, their own version of the Red Leg is back. I honestly don't know whether a 6-month lockout period would be "better" or "worse" than the ACA's mandate penalty in terms of a) effectiveness in getting younger/healthier people to enroll or b) public opinion (everyone hates the financial penalty, but if cancer patients start dropping dead because they didn't have access to chemo soon enough to be saved, that's not gonna go over too well either). What I do know is that the Red Leg appears to be back.

This is theoretically a good thing...except that this is the only leg being added back in. The enrollees (i.e., the American people) are the only ones who'd still  have to keep their level of responsibility...while the carriers and the government get to have their responsibilities slashed to the bone.

I've also made two other changes to the stool metaphor:

With all that in mind, here's the latest version of the BCRAP bill impact on the Individual Market: 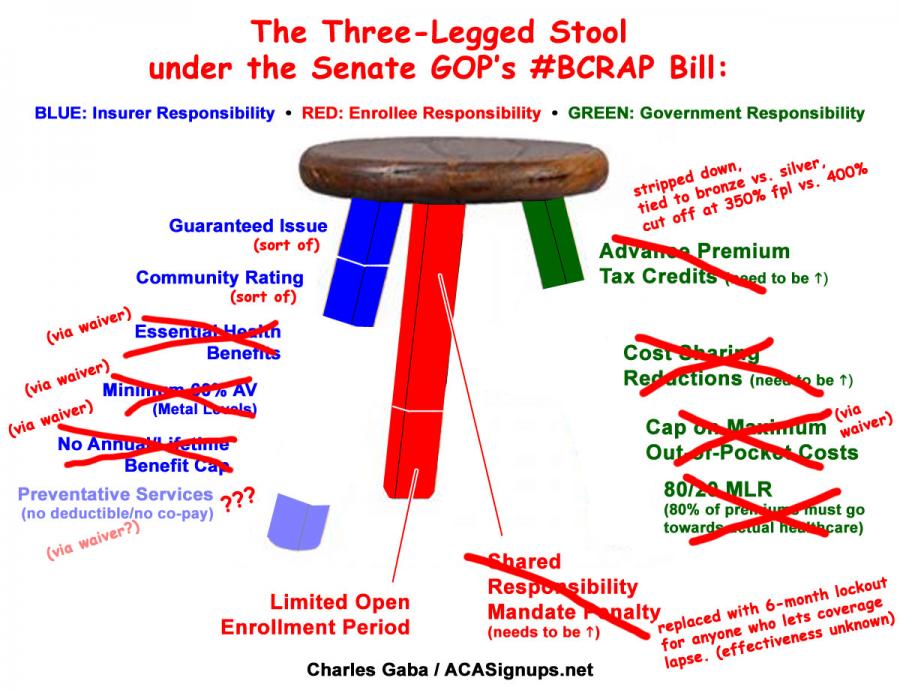 Does anyone see the problem with this picture?