Think tank confirms: Up to 2/3 of 2018 rate hikes can be pinned SPECIFICALLY on Trump/GOP Sabotage

For heaven's sake. Here I sit, painstakingly digging up, downloading, compiling and analysing a mountain of 2018 SERFF rate filing forms for hours on end to find out what the weighted average requested rate hikes are in every state and to then go beyond that to figure out how much of the increases are due to normal factors vs. Trump/Price/GOP-specific sabotage efforts such as the threat to cut off CSR payments and/or not to enforce the individual mandate penalty...

...and then a big healthcare consulting firm like Oliver Wyman goes and steals my thunder by issuing hteir own analysis:

Two market influences, in particular, are complicating 2018 rate setting: the uncertainty surrounding continued funding of cost sharing reduction (CSR) payments and the question of how the relaxation of the individual mandate will impact enrollment and risk pools.

...Our modeling shows that this uncertainty, if it remains, could lead payers to submit rate increases between 28 and 40 percent, and more than two-thirds of those increases will be related to the uncertainty around CSR payments and individual mandate.

...Medical costs in the ACA non-group market are predicted to rise in 2018, and we expect medical trend to contribute between 5 percent and 8 percent to the rate increase.

The end of the moratorium on the health insurer tax is expected to add another 3 percent.

Our analysis (based on work we have done with our micro-simulation model) shows the non-enforcement of the individual mandate could contribute about 9 percent to premium increases. However, we expect payers’ estimates of this impact to vary widely, from no impact at all to 20 percent or more.

If payers do not gain clarity on funding of CSR payments soon, they will have to build that cost into their premiums. We used publicly available data to estimate how much payers are likely to increase premiums to cover this cost and project that premiums will rise by at least 11 percent in most markets, but could climb more than 20 percent, depending on the extent to which insureds are eligible for CSR policies.

They even provide a little graphic to show the breakout: 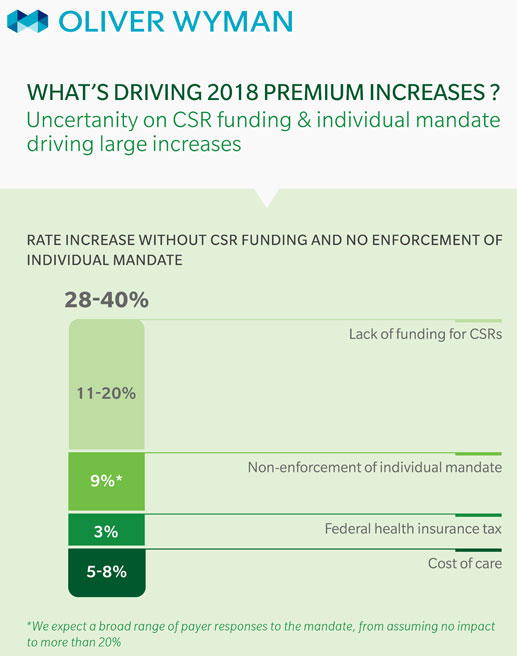 And how does that just happen to line up with my own estimates as of today (across 12 states representing around 22% of the total population)? 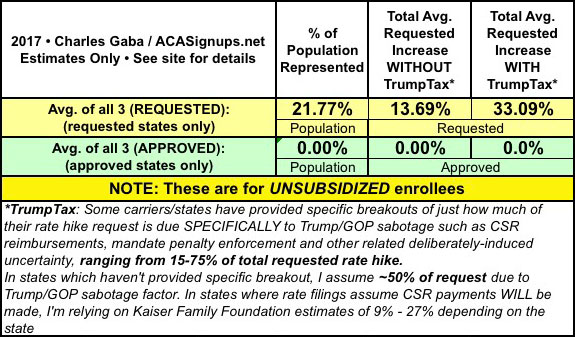 The "with TrumpTax" average is smack in the middle of Oliver Wyman's range: 33.1%.

The "no TrumpTax" is slightly higher than their range (8-11%)...but keep in mind that many of the carriers who separated out the CSR factor in their filing letters didn't separate out the Mandate Enforcement factor. Knock a few points off for that and voila, you're right in the 8-11% range. Plus, of course, I've only analysed 12 states so far; the other 38 could easily move the needle up or down somewhat.

In the meantime, I really gotta start charging someone $200/hour to do this stuff.