Quinnipiac Poll: Trumpcare is hated MORE today than it was in March.

This is rather amazing, really. With all the dramatic twists and turns that the Trumpcare/AHCA debacle has taken in the 3 months since it was slapped together by Paul Ryan & Co., you'd think that there would be some movement of the approval numbers, wouldn't you?

...and as of last week, had dropped right back down again to the same 17% it started out with:

American voters disapprove 62 - 17 percent of the Republican health care plan, compared to a 57 - 20 percent disapproval in a May 25 Quinnipiac University poll. Today, Republicans approve of the health care plan 42 - 25 percent, as every other listed party, gender, education, age or racial group disapproves by wide margins.

Not even a majority of Republicans? That's just sad.

As I noted on Twitter, it occurred to me that part of the polling results may be due to confusion over the names/acronyms of the two laws (ACA/AHCA). However, according to the actual Quinnipiac wording, this doesn't appear to be a factor:

The problem with this question, of course, is that "repeal parts" can easily mean different things to different people. My guess is that the only part that most people actually want to be repealed is the individual mandate...which is a serious problem, since that's one of the provisions which really should be beefed up to be more effective. Still, the fact remains that only 19% now want a full repeal.

As alluded to above, note the trendline--not only is Approval of the AHCA still stuck at a pathetic 17%, check out the trendline: Disapproval of Trumpcare has increased by another 6 points since March, and now overwhelms approval by a 3.6 : 1 margin.

But wait, it's even more than that: 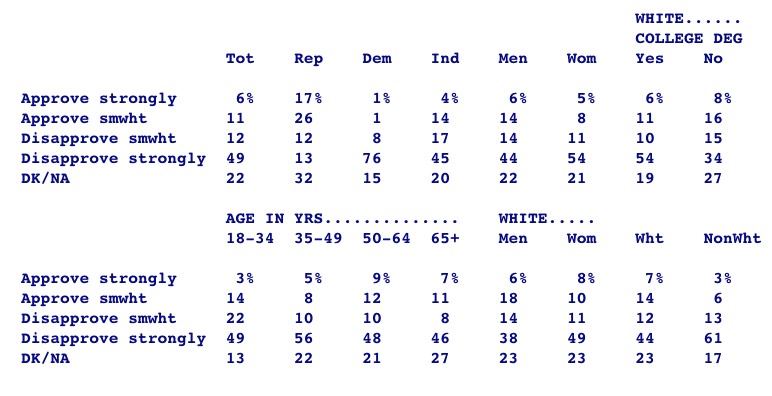 Holy smokes! Both "strong" and "somewhat" approval is exactly the same as in March (6% and 11%), but take a look at the disapproval numbers: All 6 extra points of disapproval have been added to the strong category.

In short: People hate the AHCA even more than they did the day it was introduced. Nice going, GOP.

Oh, and one more th ing:

50. Do you support or oppose decreasing federal funding for Medicaid, a government program that helps pay for health care for low income Americans?

The public wants to keep current Medicaid funding levels by more than a 2:1 margin, including 39% of Republicans. Seeing how that's the single most harmful part of the AHCA, this strikes me as significant.