Thanks to Bill Hammond of the Empire Center for the heads up.

Like Pennsylvania, the New York Dept. of Financial Services made it very easy for me this year:

This chart sets forth the average premium rate adjustments that health insurers have requested from the New York State Department of Financial Services (DFS). There are 16 insurers that have submitted individual rates and 20 insurers that have submitted small group rates for 2018. These are the rates insurers have requested and are not the final premium rates DFS will approve. Under the Insurance Law, the Superintendent may deny or modify the requested rates if she finds that the insurer's request is unreasonable, excessive, discriminatory or inadequate based on sound actuarial assumptions and methods (Insurance Law §§ 3231(e)(1), 4308(c)). From the date DFS posts insurer rate applications on the DFS website, the public will have 30 days to submit comments to DFS on the proposed rates. The total percentage requested rate increase for individual and for small group on the chart below represent a weighted average that accounts for the relative share of overall enrollment for each insurer.

The only carrier missing here is Empire's individual market request. Unfortunately, I have no idea what portion of the market share Empire currently holds. It was around 17.5% back in 2015, but that could be quite different today. Assuming Empire's share is still around 17-18%, however, their request would have to be a good 5 points higher or lower than the average (<15.6% or >21.6%) in order to move the weighted average needley by more than 1 percentage point, so it's probably fairly close to the mark.

The other slightly irksome thing this year in particular is that I can't seem to find the actual rate filings. Hammond gave me this link, but it seems to only run up through the 2017 filings; the 2018 ones aren't listed. NY has a link on the main SERFF database but a search brings up no results. There are two main reasons I'd like to see them: First, it'd be nice to have the actual enrollment numbers for each filing so I can tally up NY's actual individual market size; but more significantly this year, I'd like to know how much, if any, of these hike are related to the Trump Uncertainty Factor (CSRs, mandate enforcement, etc).

Hammond informs me that the carriers were specifically instructed to assume CSR payments would continue to be made when running these numbers, so they should fall under the "NO Trump Tax" column. This memo from NY DFS supports that philosophy. There's still the mandate enforcement factor, but until I hear otherwise, I'll have to operate on the assumption that 16.6% is the "NO Trump Tax" average for the NY individual market. The small group market, meanwhile, comes in at 11.5%.

From Hammond's own write-up:

Buffalo’s HealthNow, which is seeking an average increase of 48.8 percent for individual coverage, attributed more than half of the hike to an emergency rule change by the state Department of Financial Services.

Industry officials have also pointed to DFS’s heavy-handed suppression of individual rates in two of the past three years, which led to financial losses that are driving plans to seek bigger increases now.

...In New York, however, DFS instructed plans to assume that Obamacare will remain fully in effect through 2018, and to calculate their proposed rates accordingly. Plans were asked to outline the potential impact of federal changes in accompanying documentation, but not to reflect them in their premiums.

Thus, the hikes seen so far in New York mostly reflect a combination of state policy choices and the underlying growth of medical costs.

...Likewise, Amherst-based Independent Health told the Buffalo News that the change to risk adjustment accounted for 12 points of its requested individual premium hikes, which averaged 25.9 percent.

In other states, the Trump Tax seems to be responsible for roughly half of the rate hikes; in New York this DFS risk adjustment thing seems to be filling that role.

In short, it looks like it's the Trump Tax figure which is missing. In cases where I know the NO Trump Tax figure only, I'll use the Kaiser Family Foundation's 15% extra estimate for Medicaid expansion states as a temporary placeholder. That brings New York's average up to 31.6% with the Trump Tax.

UPDATE: OK, thanks to Rebecca Stob for reminding me that the "Trump Tax" situation is a little different in New York and Minnesota. Since they both offer Basic Health Plans (BHP) under the ACA, there's actually only a tiny number of exchange enrollees receiving CSR assistance in those states since BHP plans cover people from 138-200% FPL. For instance, in 2016, 57.3% of exchange enrollees received CSR assistance nationally but only 16% in Minnesota and 18% in New York did. The good news is that this means a much smaller CSR-related Trump Tax, since only about 1/3 as many of the enrollees receive them as in most states. The bad news is...what impact would CSR being cut off have on BHP enrollment & funding...and if it means shutting down the BHP programs, wouldn't that flood the exchanges with those enrollees, thus exacerbating the CSR problem itself?

In any event, I think this means that instead of tacking on an extra 15 point Trump Tax in NY, I can keep it to perhaps 5 points (21.6%)?

MAJOR UPDATE: Thanks again to Bill Hammond for the heads up...apparently the NY DFS has added the actual 2018 filings after all, including this summary:

As the Rate Applications for 2018 demonstrate, insurers claim that their rate requests primarily reflect increasing costs including escalating medical costs due in significant part to rapidly increasing drug costs as well as hospital and doctor consolidation, an aging population, and provider network expansion.  Additionally, insurers have noted the federal insurer fee (which was suspended by Congress for 2017, but remains for 2018 and adds approximately 1% to 2% to rates).

OK, most of these are pretty obvious, though I thought the insurer tax was closer to 3%. Noteworthy: This is the first time I've seen the aging population mentioned as a specific cause of rate hikes, which makes sense of course...and it's interesting as well that they mention the expansion of provider networks, since most carriers seem to be moving the opposite direction (from PPOs to HMOs). However, it's the second paragraph which is of the most interest here:

In addition, to prepare for potential changes to the Affordable Care Act, DFS requested that insurers provide estimates as to how the impact of a potential repeal of the individual mandate and the loss of Cost Share Reduction (CSR) funding would affect rates. Of those that provided numerical estimates, on average, insurers estimated that a full repeal of the federal individual mandate would increase rates by an additional 32.6% and the loss of CSR funding would increase rates an additional 1.3%.

OK, so I had the right idea above regarding CSR funding playing a minor role in NY, but still overestimated. Instead of 5 points, the CSR factor only brings the state average up to around 17.9%. HOWEVER, check out the individual mandate repeal figure...remember, that's an additional 32.6 percentage points, for a total of a whopping 50.5% rate hike assuming the full Trump/GOP Uncertainty/Sabotage Factor comes into play.

I'm not quite sure how to enter this into the spreadsheet, however. There's a big difference between Tom Price/HHS not enforcing the mandate penalty and Congress officially repealing it. In the first case, many people would still likely sign up because they didn't know whether the penalty would be enforced or not, whereas in the second case there wouldn't be any penalty to even worry about. Important distinction.

With that in mind, I'm going to split the difference and add 1.3 points for NO-CSR and 16.3 points for Mandate Non-Enforcement, for a total "TrumpTax" hike request of 34.2%

UPDATE: OK, upon further reflection, forget that...the "Trump Tax" projection is supposed to reflect a worst case scenario...which in this case assumes no mandate penalty. I'm going with the full 32.6 points, bringing the full TrumpTax scenario up to 50.5%

IMPORTANT: BOTH estimates above also assume that NY's Basic Health Program would remain intact with roughly the current levels of enrollment. However, since BHP funding is connected to both CSR funding as well as APTC assistance levels, the odds are that the BHP program would also be radically impacted one way or the other (there was a raging debate about this on Twitter among healthcare wonks this morning, and I honestly don't remember what the conclusion was on the issue). 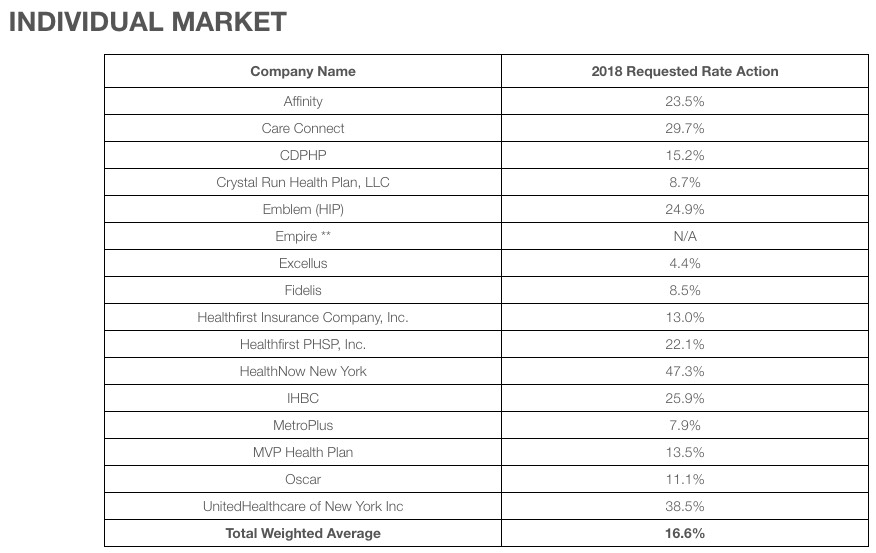 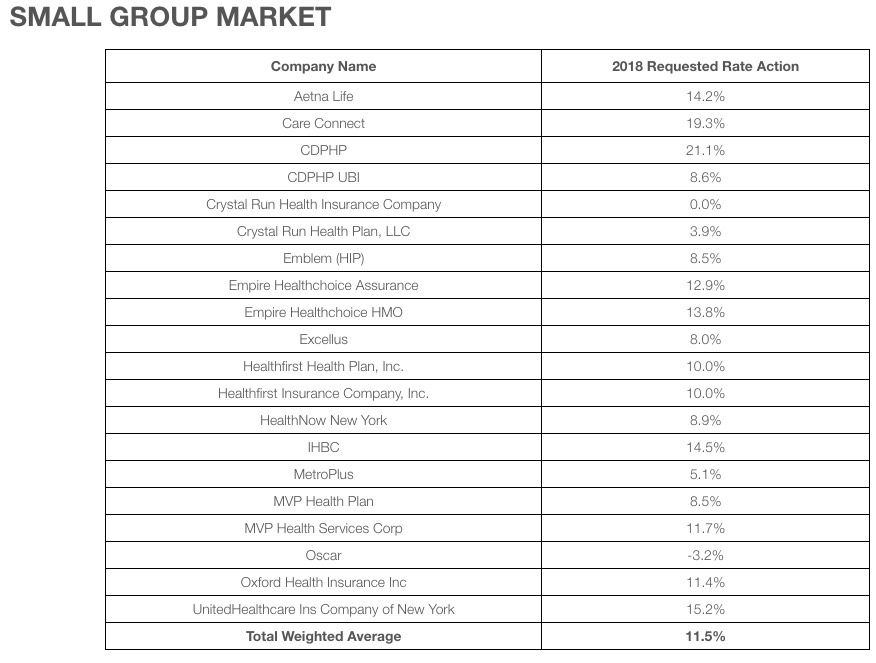