I've been warning for months now that the Trump administration is doing everything possible to disrupt, undermine and otherwise sabotage the ACA exchanges as much as possible. Yes, the GOP in general has been doing so for 7 years now, but they've really shifted it into overdrive now that they hold all the cards.

In the past, some of those sabotage efforts were obvious and had a direct impact on the exchanges (the Risk Corridor Massacre, for instance) while others were smaller, less obvious and harder to pinpoint a precise cause/effect relationship (red states attempting to obstruct ACA navigators, for example). Donald Trump and his rogue's gallery of cretins are not exactly known for their subtlety, however, so his obstruction/sabotage efforts have been pretty blatant, including:

So I received a letter from the IRS today. I opened the letter expecting it to be a tax bill, which it was. What I didn’t expect to see was the amount owed, which was considerably less than what was on my 1040 form. I opened up my 2016 tax return, got out my calculator, and did a little math. What I found was that the amount that the IRS says I now owe in the letter is the same as what’s on my tax return LESS the ACA Individual Mandate penalty! If this is true for everyone who legitimately owes the penalty, then the ACA is being undermined by the Trump Administration because that tax goes towards paying for other benefits under the law.

There's some discussion in the comments about whether or not the diarist is misunderstanding the procedure/forms, but it's worth checking into. In addition, since then I've seen a couple of disturbing tweets along the same lines:

Andy my husband is a CFP he received a notice of instruction that he did not have to even indicate if his clients were ACA compliant. 1/

Further, taxpayers could skip that line altogether w/o answering the question, no penalty would be collected for 2016. 2/2

This is true. A friend told me she didn't understand why, but wasn't fined this year for not having health insurance.

I'm still not convinced that this is happening on a widespread basis, but it's definitely worth keeping an eye on, and wouldn't surprise me in the least.

Meanwhile, whether or not Trump actually does enforce the mandate penalty and/or continue making CSR payments throughout next year, the insurance carriers have made it extremely clear that they don't think they can trust Trump/the GOP to do their jobs properly, so they're doing exactly what folks like myself, David Anderson and others have been warning would happen: Either dropping out of the individual market entirely or jacking their rates up sky-high to cover themselves in a worst-case scenario.

As I noted this morning:

What's fascinating to me is how quickly these press releases are evolving now that the rubber is hitting the road. A couple months ago it was a lot of vague warnings and actuarial-speak about "negative impact on morbidity" and so on. Then, starting a few weeks ago, insurance company representatives started getting more specific, with the CareFirst (MD, DC, VA) CEO mentioning "tacking on an extra 15 points" due to Trump/GOP uncertainty (or around 40% of the total rate increase request).

Finally, over the past week or so, the carriers stopped messing around entirely, with the CEO of Blue Cross Blue Shield of North Carolina going so far as to give an exact percentage point breakout (60% of the total) and even whipping up a nifty graphic showing specifically what's causing their 22.9% increase request (14.1% Trump/GOP uncertainty, 8.8% other factors). Since BCBSNC holds the vast majority of NC's individual market, that effectively means that their breakout is representive statewide.

And finally, you have this press release from the Pennsylvania Insurance Commissioner, which applies to all 5 carriers collectively: 8.8% increase if not for Trump/GOP sabotage, up to 36.3% with it added. That means that the worst-case scenario would mean a "Trump Tax" of 27.5%...or 3/4 of the overall rate increases.

Previously, I was estimating that perhaps 15-40% of carrier rate hike requests for 2018 could be pinned specifically on Trump/GOP sabotage/uncertainty. However, with the one-two punch of North Carolina and Pennsylvania (both of which are pretty sizeable states, with over a half-million indy market enrollees apiece), I now think I was underestimating that--it seems to be more in the neighborhood of 50% even.

With that in mind, I've added new columns in the spreadsheets for my 2018 Rate Hike Project which compare the higher increase request (including the Trump Uncertainty Factor, or TUF) vs. what the carriers themselves say their rate increases would be if Trump/the GOP didn't keep deliberately throwing feces into the works.

Again, NC and PA have given hard numbers: 8.8% "non-TUF" for each vs. 23.3% and 36.3% with TUF respectively. Other states are fuzzier so far; some carrier CEOs have simply said "a major factor" or 'the primary factor", while the CEO of CareFirst said they "tacked on an extra 15 points" in their filings. I've decided to err on the side of caution and use a rule of thumb of 50% for any state where it's not obvious what the breakout actually is.

Here's what it looks like so far (additional details at the 2018 Rate Hike Project link). As you can see, across 7 states representing about 15% of the market, the carriers are initially asking for average increases of around 11% without the Trump Uncertainty Factor, or nearly 30% with TUF.

These averages will change as more states are plugged in, and I'll be sure to change that 50% placeholder for any state if I come across more specific data for it. Meanwhile, so far it looks like unsubsidized exchange enrollees are looking at roughly an extra 19% rate increase specifically due to Trump/GOP meddling...which happens to be almost exactly what both the Kaiser Family Foundation has been expecting. 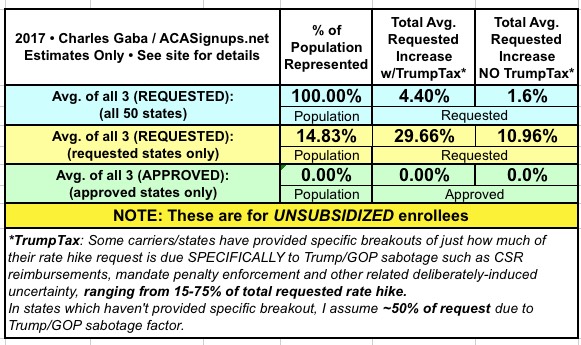 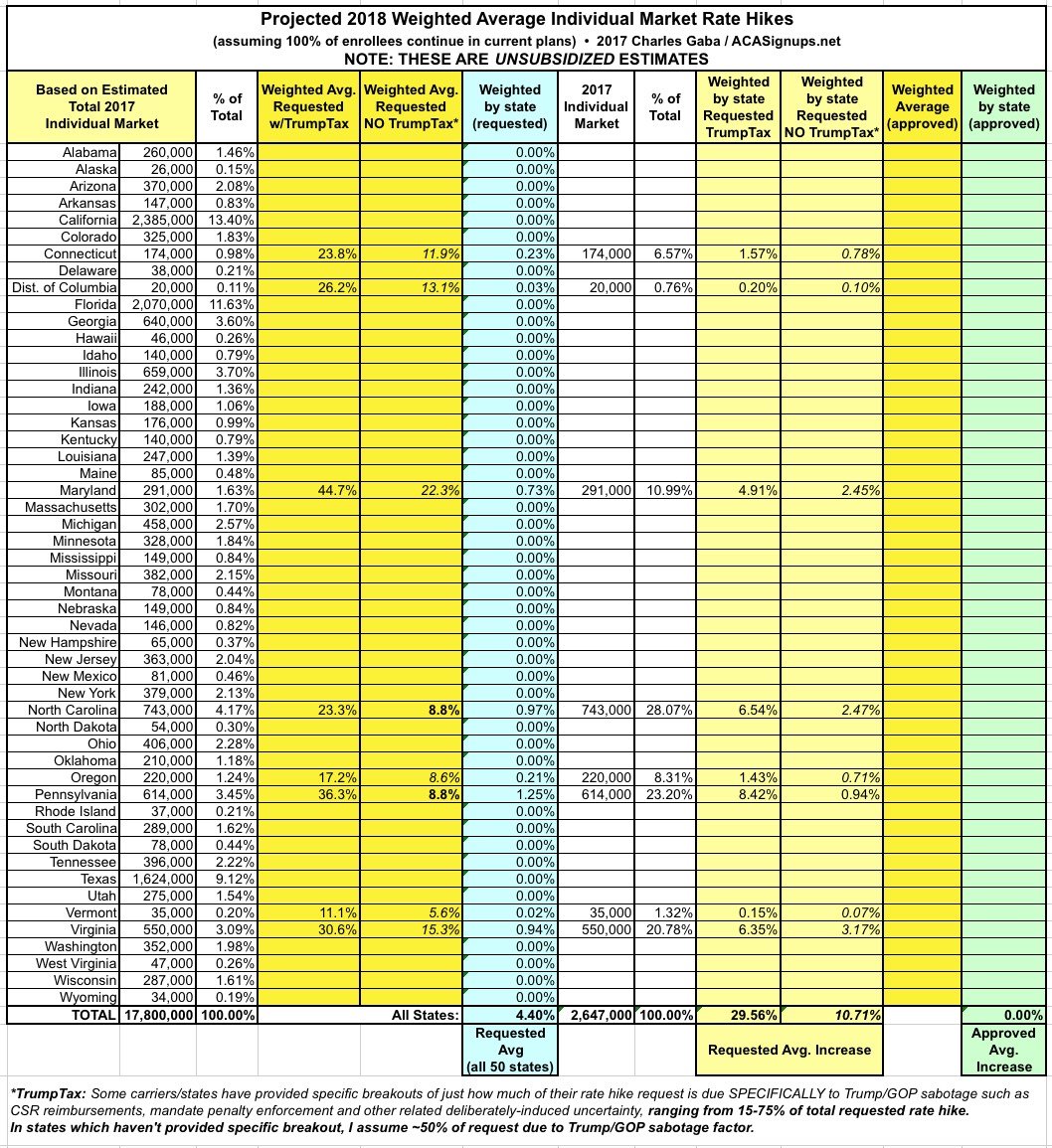 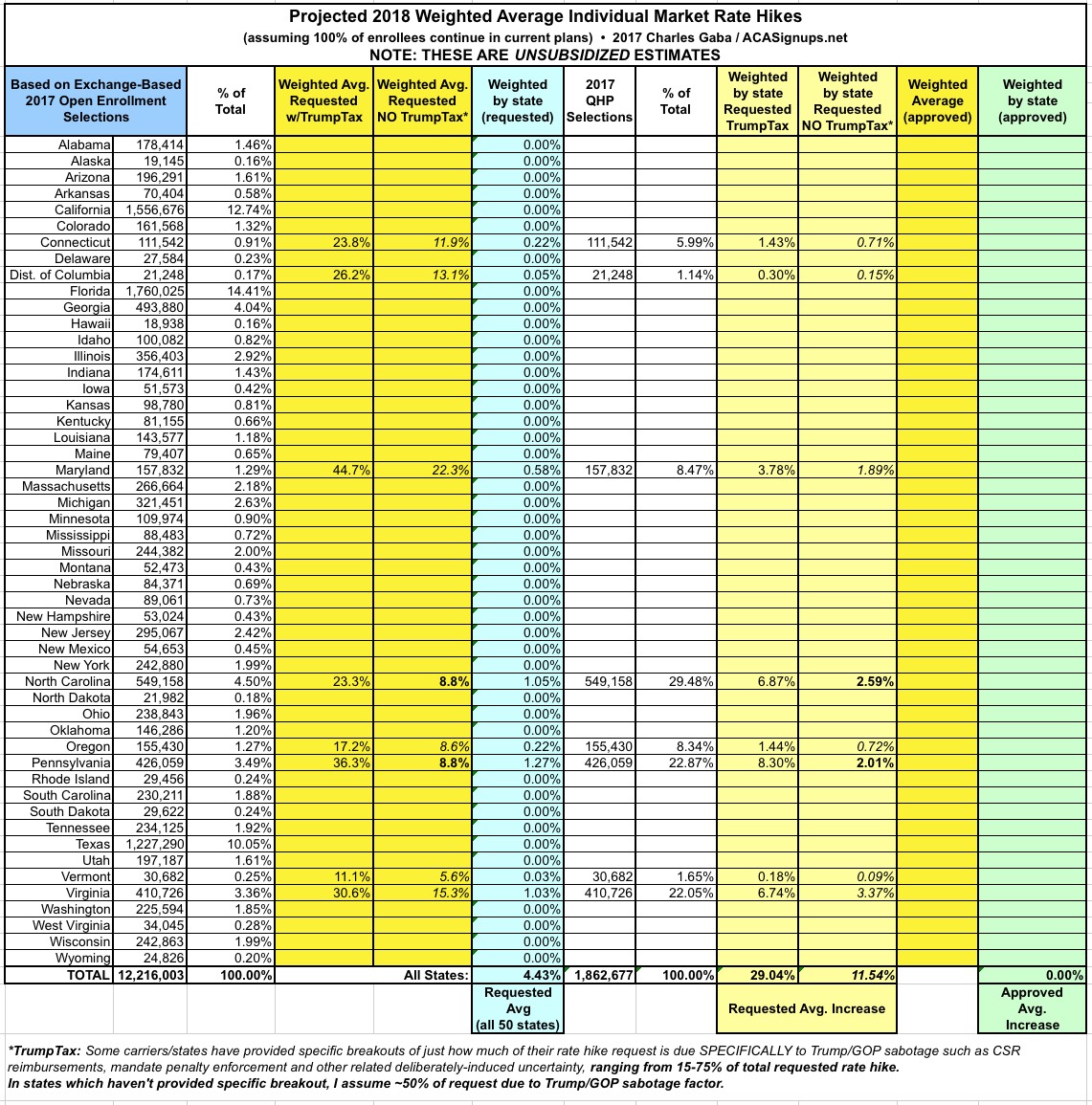 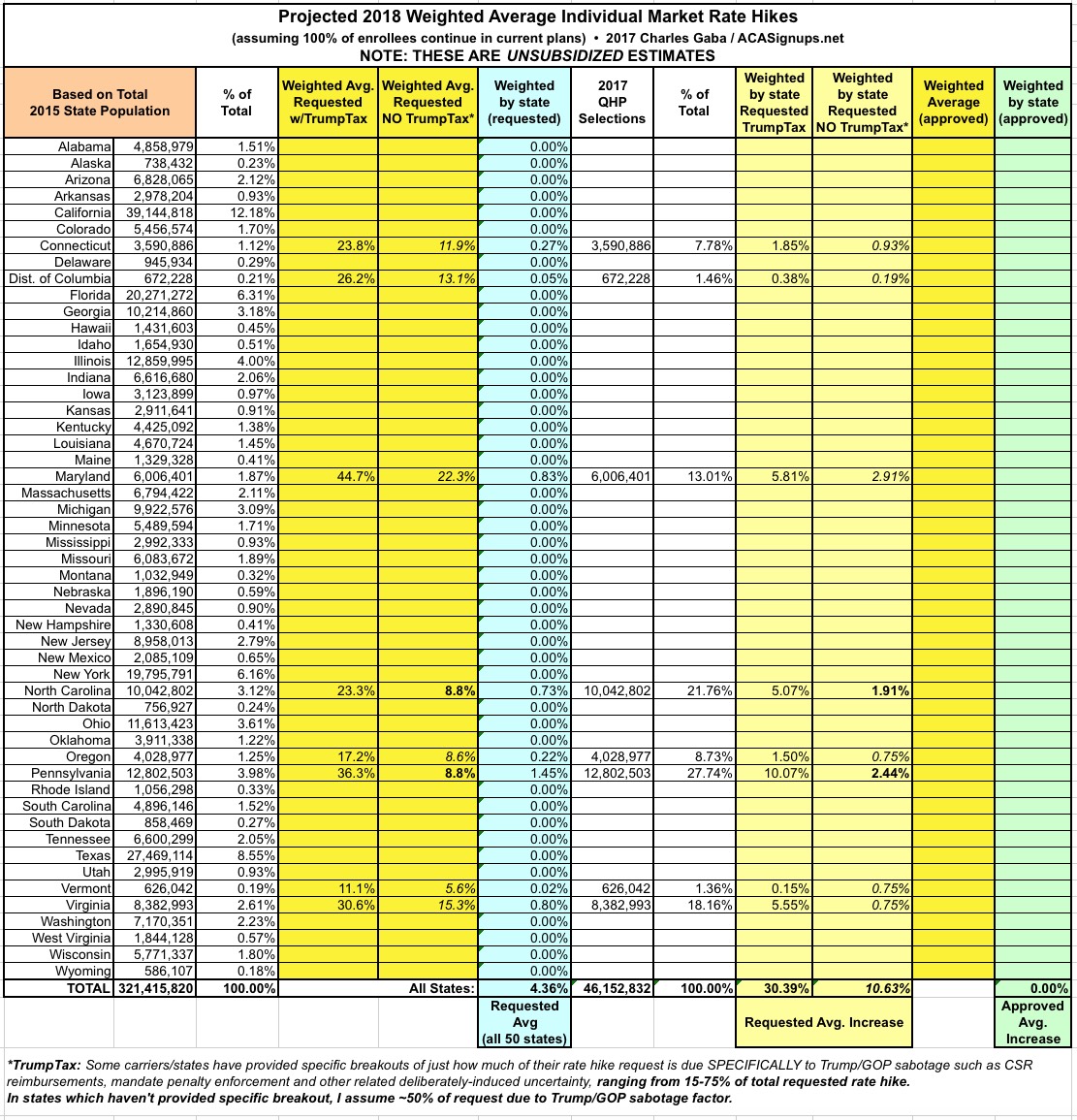