(this is Part Two of my analysis of the CBO score of AHCA 2.0 (the version which actually passed the House 3 weeks ago). Part One is here.

OK, digging into the PDF itself, let's see what else there is of interest... (this is a blog post in progress...check back for frequent updates...)

Here's a list of what HASN'T changed from the "1.0" version of the AHCA:

In this cost estimate, as in the preceding estimates, the budgetary effects related to health insurance coverage would stem primarily from the following provisions:

Goodbye 90% Federal funding! States would have to pony up anywhere from 25-50% of the funding if they wanted to keep those folks covered.

Medicaid funding would be quietly starved to death as the years go by. This is what used to get Paul Ryan off back in college.

Yes, let's get rid of tax credits based on a combination of people's income and how much insurance policies actually cost...let's replace it with a flat age-based amount which bears absolutely no connection to how much policies would actually cost. Brilliant.

The individual mandate penalty exist for a reason, folks. Getting rid of them would not be helpful.

Around $100 billion over 10 years, or a whopping $10 billion per year. This wouldn't be bad if it was on top of properly funded tax credits...but it's not.

Again: The premiums for older folks could be 5x as high, but the tax credits would only be 2x as high. Anyone see a math problem here?

This is otherwise known as the Republican's version of the Individual Mandate which they supposedly hate so much. It's somehow both more draconian than the ACA's version while also being less effective, since a young, healthy adult could go 10 years without coverage with no penalty whatsoever, then quickly sign up and pay the 30% surcharge rather than face a $100,000 chemotherapy bill. I really don't think they thought this one through.

Here are the primary reasons for this travesty in the first place: TAX CUTS FOR THE WEALTHY GALORE!

Finally, here's the "MacArthur Amendment" stuff which was just enough of a fig leaf to allow them to squeeze this turd out of their colons (technically the 3rd and 4th items were shoved into the bill a couple of weeks earlier, but they weren't part of the "1.0" CBO score either):

Here's a bar graph showing the devastating impact of the AHCA on healthcare coverage percentages projected as of 2026 compared with the Affordable Care Act. The uninsured rate would increase dramatically for every age and income level, but especially for...poor/low-income people. Color me shocked. 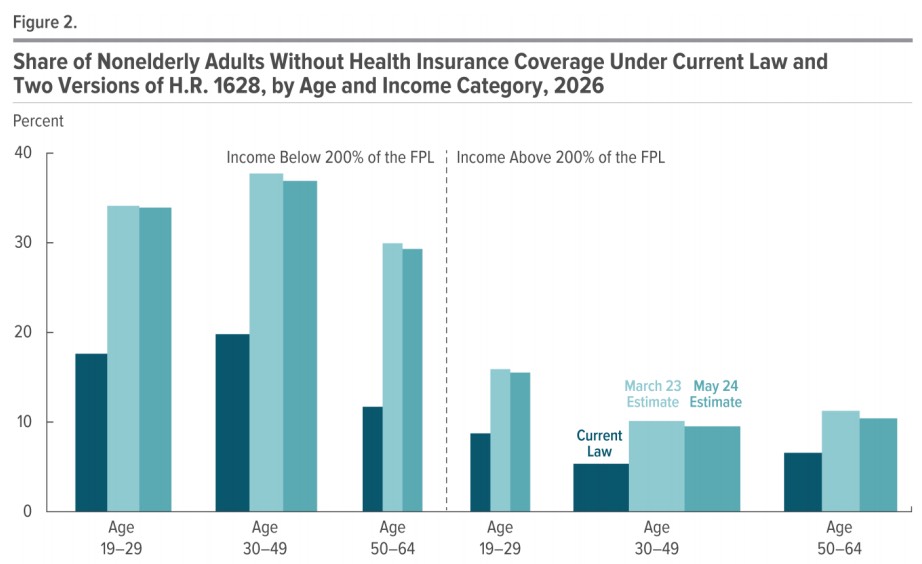 Regarding the radical restructuring of the tax credits:

H.R. 1628 would result in significant changes in premiums according to people’s age— on net, after accounting for tax credits—that are similar to those illustrated in the March 13th cost estimate.6 Under the act, premiums for older people could be five times larger than those for younger people in many states, but the size of the tax credits for older people would be only twice the size of the credits for younger people.7 As a result:

As a result of the narrower scope of benefits included in many plans, however, enrollees who would use services that were not covered by the available plans would face substantial increases in their out-of-pocket costs under the act.

I already covered the CBO's projection of how they see the waivers breaking out (states representing 1/2 the country wouldn't get one, 1/3 of the country would likely waive EHBs but not community rating, and the remaining 1/6th would go for the full draconian waivers). Here's some more details on how that might play out:

The Scope of Benefits Included in Plans.

CBO and JCT expect that, because of the regulations still in place governing guaranteed issue, which requires insurers to offer coverage to any applicant, insurers generally would not want to sell policies that included benefits that were not required by state law. Plans with additional benefits that were not mandated would tend to attract enrollees who would use them and thus increase insurers’ costs. However, if insurers raised premiums to pay for those costs, they would tend to 26 lose enrollees who did not expect to use those additional benefits. To avoid that outcome, insurers would probably offer plans that excluded such benefits entirely or limited the benefits substantially. As a result of the narrow scope of benefits, enrollees who use the services no longer covered or for which coverage was limited would face increases in their out-of-pocket costs. Some people would have increases of thousands of dollars in a year. For example, enrollees who use expensive drugs could see large increases in out-of-pocket spending because, in states that excluded prescription drug benefits from EHBs, the ban on annual and lifetime limits on covered benefits would no longer apply.

An alternative to narrowing the scope of benefits would be for insurers to offer benefits that would otherwise be excluded from a policy in the form of a rider. A rider is an add-on provision to a basic insurance policy that provides additional benefits at an extra cost. For example, maternity benefits could be sold as a rider by some insurers in states that did not include maternity care as an EHB. Insurers would expect most purchasers to use the benefits and would therefore price that rider at close to the average cost of maternity coverage, which could be more than $1,000 per month.13 (The average cost of pregnancy care and delivery is about $17,000 for women with private insurance coverage.)14 Alternatively, insurers could offer a lower-cost rider providing less-than-comprehensive coverage—with, for example, a $2,000 limit. Either type of rider would result in substantially higher out-of-pocket health care costs for pregnant women who purchased insurance in the nongroup market.

Although CBO and JCT expect that federal funding would have the intended effect of lowering premiums and out-of-pocket payments to some extent, its effect on community rated premiums would be small because the funding would not be sufficient to substantially reduce the large increases in premiums for high-cost enrollees. To evaluate the potential effect of the $8 billion fund, looking back at the high-risk pool program funded by the ACA prior to 2014 is useful. Within two years, the combined enrollment of about 100,000 enrollees in that program resulted in federal spending of close to $2.5 billion.

Effects on CO-OP or Multistate Plans. The act would exempt plans in the Consumer Operated and Oriented Plan (CO-OP) program established by the ACA, multistate plans established under the ACA, and Members of Congress and Congressional staff from the terms of any waiver approved in a state, as well as provide exemptions in a limited number of other circumstances. CBO and JCT expect that those plans would not be profitable because other insurers in the state would receive the majority of the healthier enrollees.

I'm not sure whether this is the same Congressional exemption that Sarah Kliff spied several weeks ago, and which the GOP "fixed" via voting on a separate bill the same day that they passed this one. If it is, then I suppose it's moot--they were busted on it and it would presumably already be scratched out if the AHCA were to become law. If this is a different exemption, however, that could be a big deal.

Under the first version of the AHCA, the CBO projected that by 2026, around 24 million people would lose coverage who otherwise would have it if the ACA was to remain in place; the breakout at the time was roughly 14 million losing Medicaid, 3 million losing individual market coverage and 7 million losing group coverage. 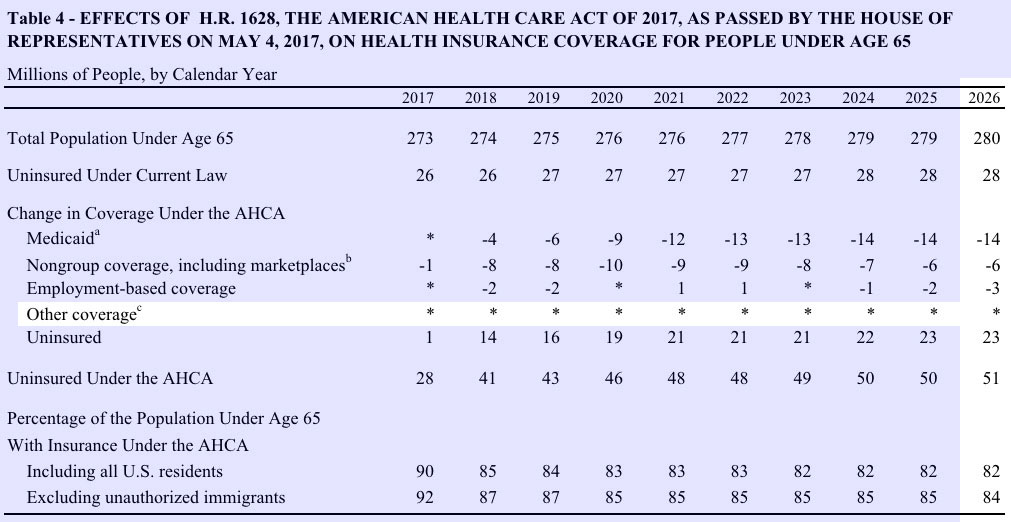 I should note that the actual number who would lose coverage would actually likely be about a million higher than either CBO score shows...because of that "Other Coverage" line, which includes the Basic Health Program according to the footnotes in both versions. There are already over 760,000 people enrolled in the BHP programs in New York and Minnesota today, and both seem to be quite successful, so assuming the ACA were to continue (including full funding etc), I find it hard to believe that, considering population growth, BHP enrollment wouldn't otherwise be up to perhaps 800,000 people by 2026. Since the AHCA would wipe out BHP funding as well, and the projected number is already closer to 1 million than half a million, I'm not sure why the CBO didn't list it as "1" instead of an asterisk.

Finally, here's the table which is already getting tons of press and which I expect to see thrown around a lot over the next few weeks: The "illustrative examples" of how people of different ages and incomes would fare on the individual market under the AHCA versus the ACA, in 2026: 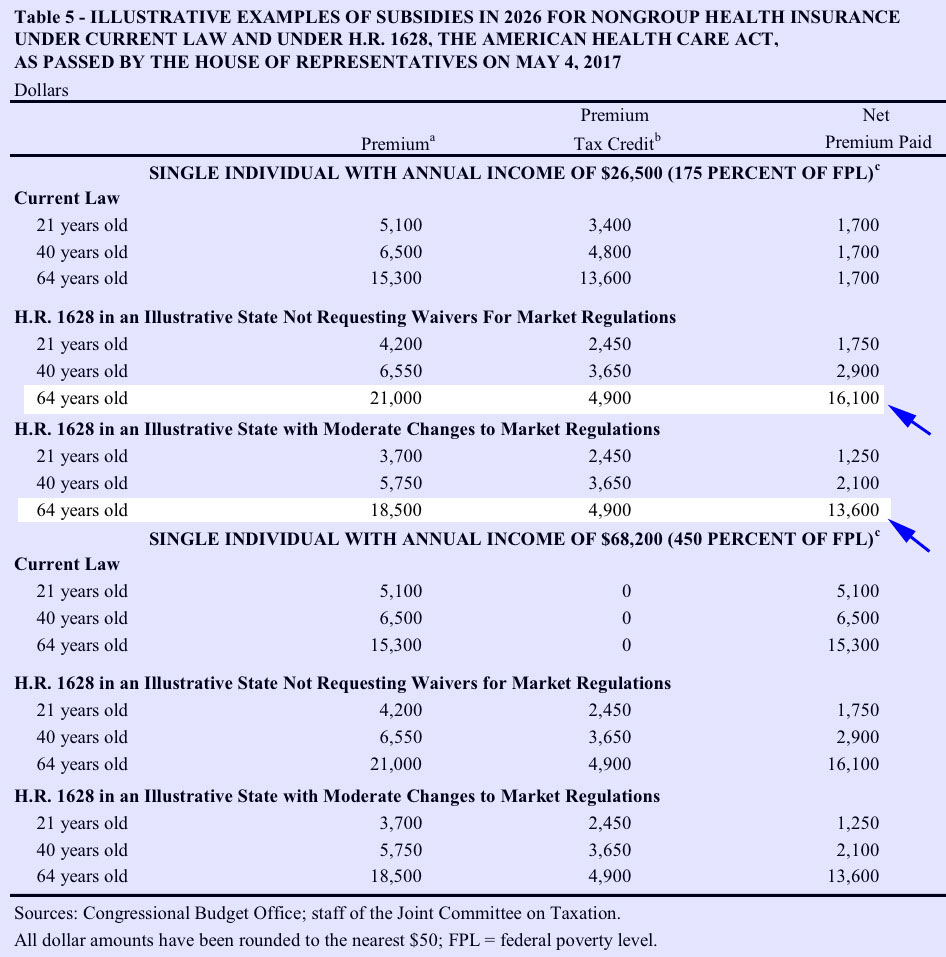 Again, under the ACA, the amount of the tax credits changes dramatically depending on the enrollee's income, rating area and benchmark policy premium (the 2nd lowest-price Silver plan in their area), and is the modified by age accordingly. As a result, at 175% FPL, the net premium paid is the same regardless of age: Around $1,700/year.

Under the AHCA, however, the tax credits are based purely on age (at least untily you hit around 620% FPL, but that's not one ofthe examples shown). There's no consideration given for how much premiums actually are, for what your income actually is or for where you actually live...and the difference is dramatic:

Of course, at that income level none of them would be able to afford it (remember, this assumes a single adult only earning $26,500/year...that'd be 50-60% of their total income), so millions of them would have to drop coverage completely and pray that they didn't get sick/injured long enough to eventually make it past the Medicare line at 65.

Those people dropping out of the market would itself be one of the main reasons why premiums would be slightly lower for everyone else under the AHCA...because several million poor old people would be kicked to the curb, thus improving the risk pool for everyone else. Charming.