Oregon is the 5th state to post their initial 2018 rate filings. Last year their weighted average increase was roughly 26.5% across 10 individual market carriers. This year I only see 8 carriers offering policies on the indy market, but the two missing are "Trillium" and "ZOOM", neither of which had more than a handful of enrollees to begin with.

As you can see, ATRIO Health Plans was refreshingly clear in their rate justification letter, not only listing the key numbers (covered lives, average increase) but the reasons for it: 4% due to the reinstatement of the ACA's carrier tax; 1% due to them choosing to shrink their own coverage area from 6 counties to just 2; an increase for smokers., etc. They list 4,250 people being impacted by the increase; I don't know the population of the other 4 counties they're pulling out of, but assuming they're roughly equal, around 8,000 current enrollees will have to shop around this fall. 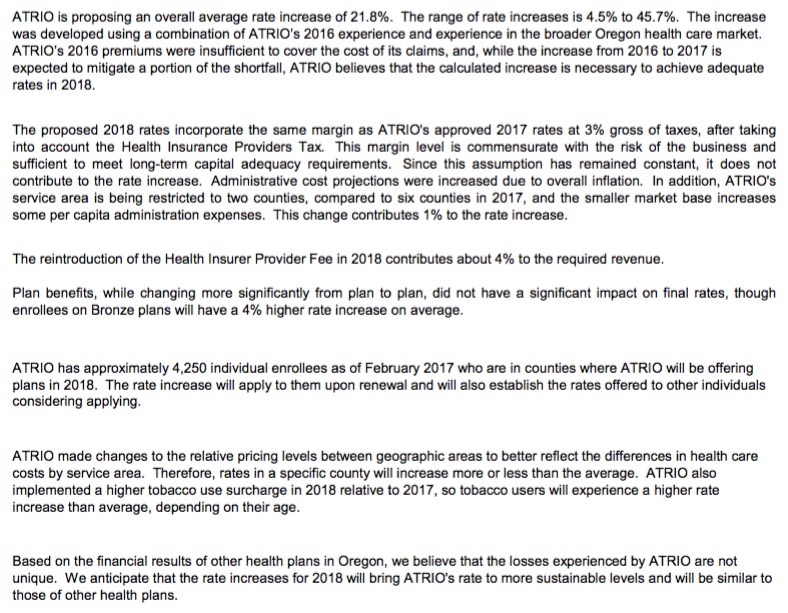 BridgeSpan is also pretty candid about breaking out their increase justification, including an important sentence which David Anderson called to my attention: "Another driver is the expectation that lower cost members are less likely to purchase coverage in 2018."

Translation: We don't expect HHS to actually enforce the individual mandate (or, at the very least, BridgeSpan is pretty sure that potential enrollees don't think HHS will enforce the mandate, which amounts to the same thing...it doesn't really matter whether they do enforce the mandate if enough people think they won't). 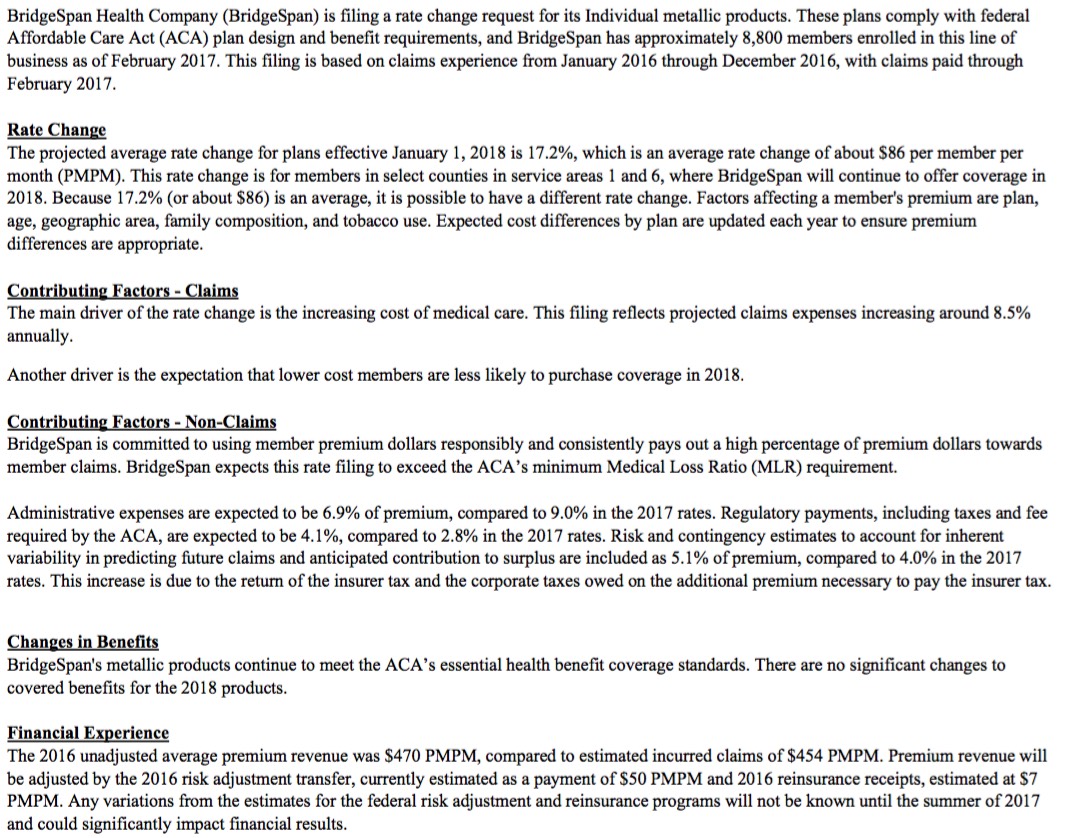 Both David Anderson and Wesley Sanders (who know this stuff far better than I do) have also pointed out that the big red flag to look for re. "Trump/GOP Sabotage/Uncertainty Factor" is the MORBIDITY contributor. In short, "morbidity" translates to "how much sicker do we expect our risk pool to be next year in comparison to our current pool of enrollees?" Since most of the carriers now have 2-3 years' worth of data baked into the mix, any dramatic morbidity changes going forward relate to which types of enrollees they expect to sign up (or stick around) vs. which type they expect to take a pass (or drop out). The individual mandate, weak though it might be ($695/person or 2.5% of household income) is one of the few incentives healthy people have to sign up each year. Take that away (or at least make people think you're taking that away) and healthier people have far less incentive to do so...while healthier people already enrolled have one less reason not to drop out the following year. 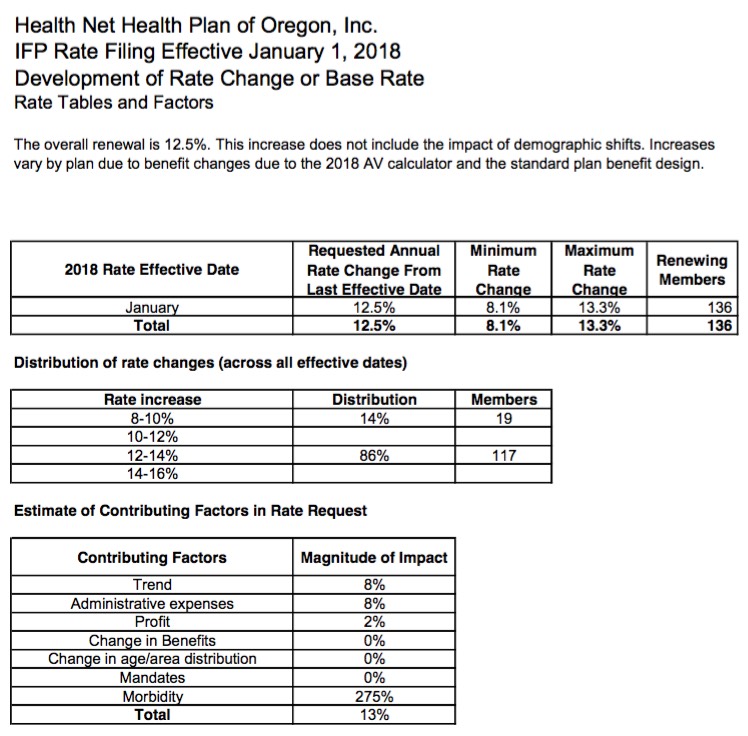 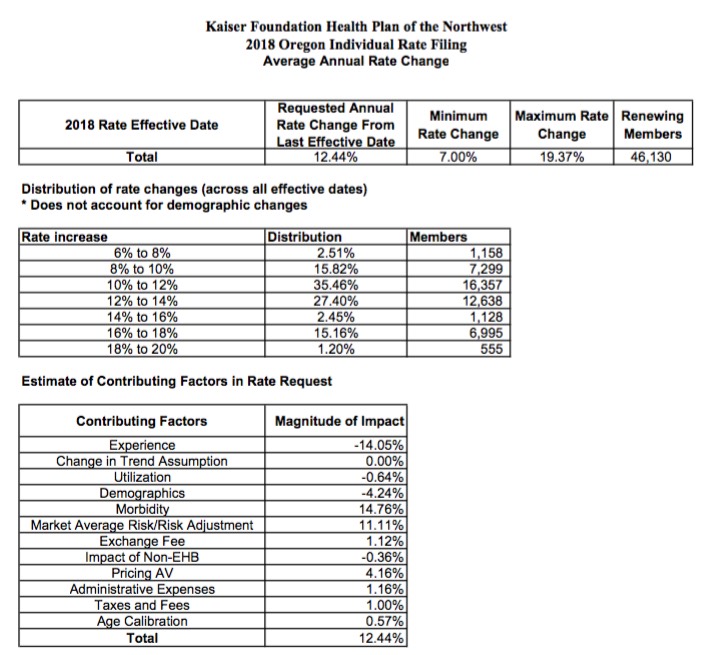 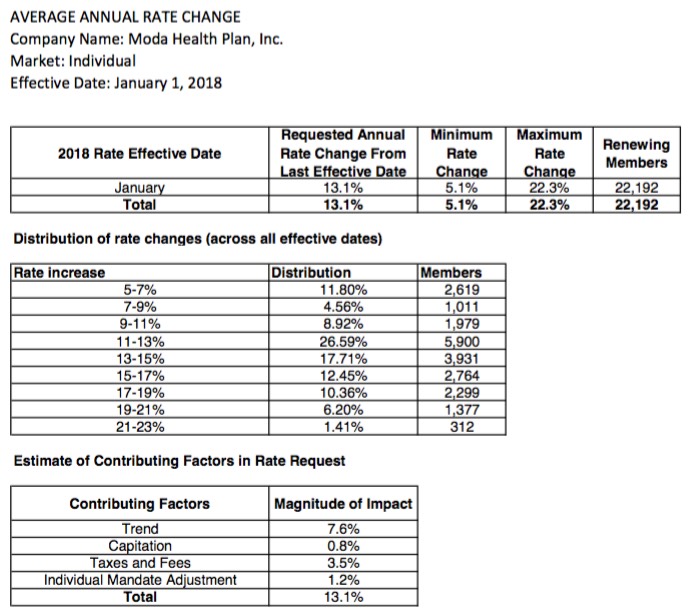 On interesting tidbit re. the Moda filing: They're expecting enrollment to increase by around 6,000 people (transfers from ATRIO perhaps?), and to then "stay consistent throughout the remainder of the year" which is odd since there's generally a good 20% or so net attrition rate every year. Huh. 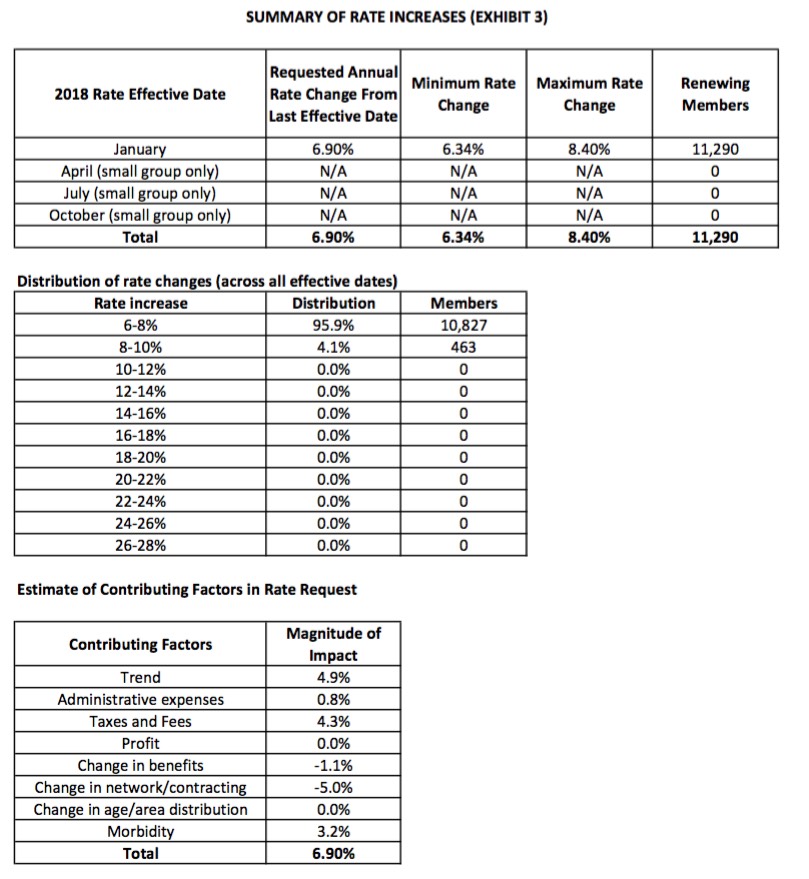 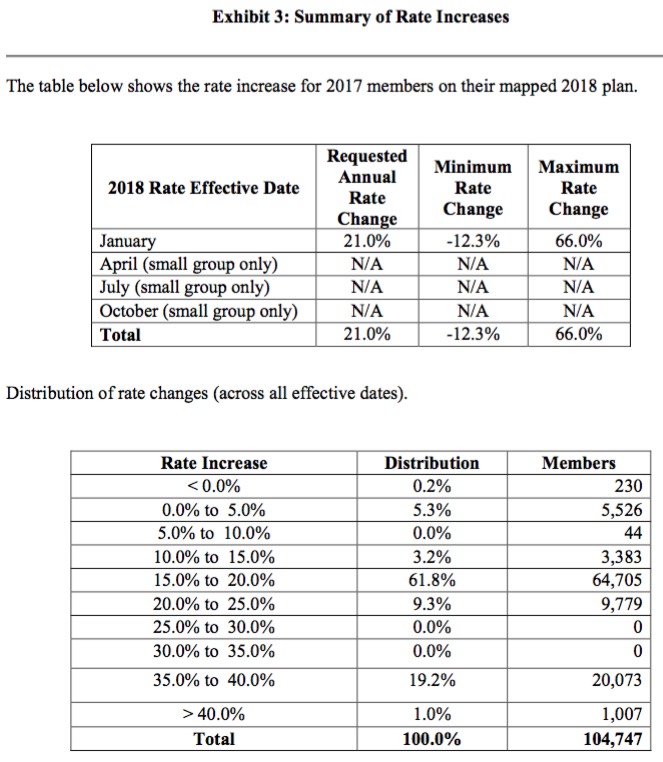 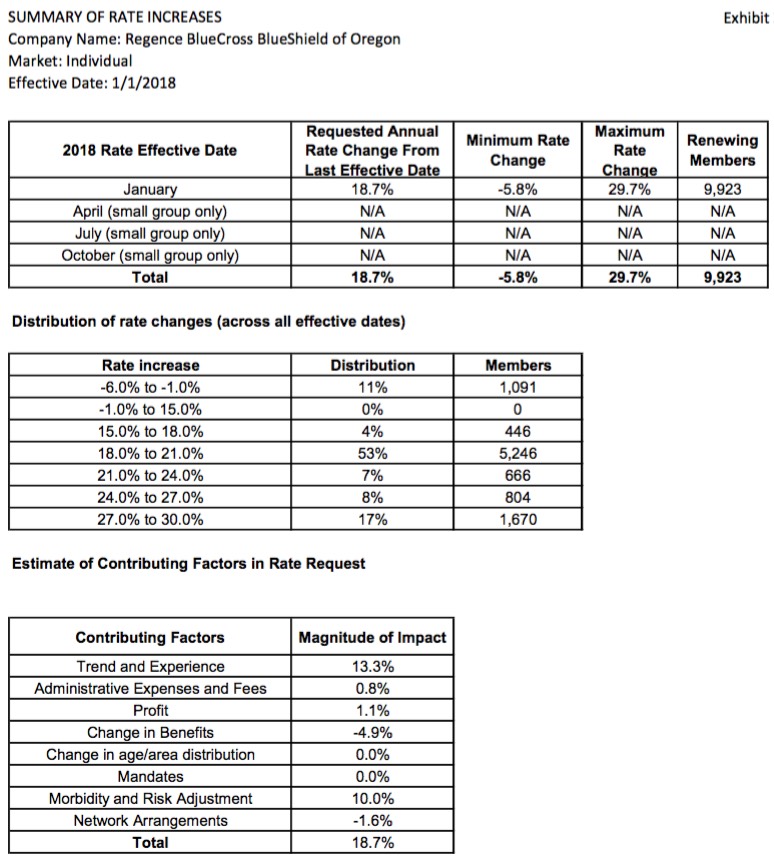 Overall, it looks like the unsubsidized weighted average increase being requested by Oregon carriers for the individual market is around 17.2%, while the small group market comes in at 8.2%.

CORRECTION: Thanks to joe in the comments for noting an error in the Small Group table; I had Kaiser's enrollment projection way off. 8.2% is the corrected statewide average. 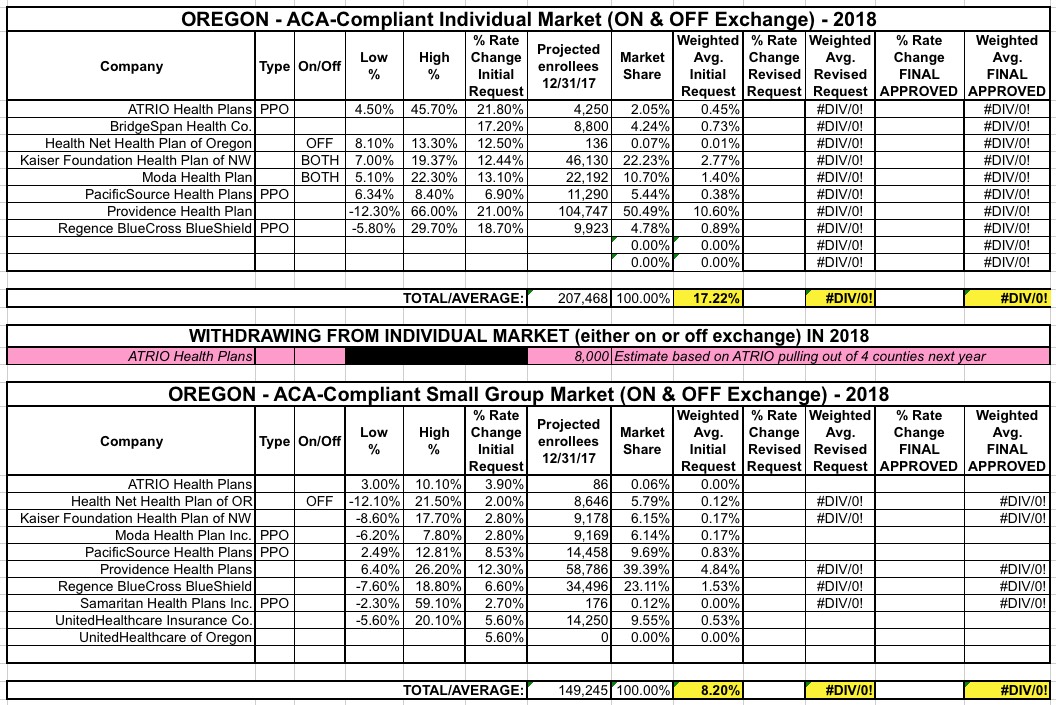