Dr. J. Mario Molina, CEO of health insurer Molina Healthcare, sent a warning Thursday to Republicans in Congress and the Trump administration: If the Affordable Care Act cost-sharing reduction subsidies are not funded, Molina will "withdraw from the marketplace immediately." Molina's letter — addressed to Paul Ryan, Mitch McConnell, Nancy Pelosi and Chuck Schumer — said the company has priced the subsidies into next year's premiums and that they are "not a bailout or windfall."

Why this matters: Molina — a Medicaid-based insurer that has thrived in the exchanges — is threatening to throw people off of their health coverage this year and also refuse to participate next year. Roughly 1 million people have a Molina ACA plan. Molina's letter adds a fresh sense of urgency and embodies what the entire health care industry wants: certainty that funding will continue.

Here's the relevant part of the letter:

"Currently we serve 1,035,000 members through the Health Insurance Marketplaces in 2017, making Molina one of the largest participants in this program. About 9% of all persons enrolled in the Marketplace are members of Molina Healthcare.

..."If the CSR funding continues, we intend to maintain our participation in the Marketplace for 2018.

...this is not a bail-out or windfall to the insurance company.

...If the CSR is not funded, we will have no choice but to send a notice of default informing the government that we are dropping our contracts for their failure to pay premiums and seek to withdraw from the Marketplace immediately. That would result in about 650,000 - 700,000 people losing insurance coverage in 2017, and we would not participate in Marketplace in 2018 resulting in over 1 million Americans losing health insurance coverage."

How is that possible? Due to an exit clause in their contracts with the federal government which allows them to terminate exchange policies immediately in the event of certain types of breach of contract...which many legal experts think includes failure to provide CSR reimbursements.

This is PRECISELY what I've been warning about since back in September, again in November, again a few weeks ago and once again yesterday:

So far, the Trump administration has authorized CSR payments for February, March and April...but if the Politico story is accurate, it's still quite possible that Trump will pull the plug on them starting as early as May 1st (or June, or July...)

Yes, that's right: There's an outside possibility that several million people could have their policies terminated as early as May 31st, 2017.

As I noted yesterday, this threat may be mitigated by state breach-of-contract laws. Remember, Molina has one contract with the government but also has separate contracts with the policyholders, so it's possible that they may not be able to drop coverage mid-year after all. Also, a reliable source of mine states that the "exit clause" I keep referring to may only apply to the federal exchange (39 states), not the state-based exchanges.

However...Molina no doubt knows far more than I do about the legality of their threat. I'm sure they've reviewed the relevant state laws in every state they participate in and have either concluded that a) they'd be in the clear to terminate 650 - 700K people from coverage mid-year or b) that it's worth the legal and PR nightmare which would no doubt follow regardless.

There's also a third option: c) they're bluffing...but I tend to doubt that. Molina has been the most vocal of the healthcare CEOs on this issue, and this is a high-profile public letter. If he's playing chicken with Trump/Ryan, I think he's prepared for the outcome.

For the record, here are the counties/states where Molina currently offers ACA exchange plans:

Note: Molina enrolled 42,633 people via Washington State's exchange this year, though this is likely down to ~37,000 or so today.

UPDATE: Before everyone starts screaming about the Evil Greedy Heartless Insurance Companies, I need to clarify that in this particular situation, Dr. Molina (the CEO) would kind of be in the right.

It’s important to understand that CSR payments work differently from the ACA’s premium subsidies. CSR payments are reimbursements to the insurance carrier for covering big chunks of the deductibles/co-pays for a bunch of their enrollees. In other words, they’re being paid back after the fact...and the ACA requires them to continue paying those deductibles/co-pays whether or not they actually get reimbursed from the government.

CSR reimbursements are expected to total around $7 billion this year. Molina has around 9% of exchange enrollees, so that likely means somewhere in the neighborhood of $630 million for the year. Trump has kept the payments going for the first 4 months, so that’s around $420 million in reimbursements to them for the balance of the year.

Again: Whatever you think of private insurance companies, it’s still a bit unreasonable to ask one of them to knowingly shell out $420 million that’s legally required to be paid back if they have no idea whether or not it actually will be paid back.

To be honest, assuming CSRs are killed, I expect most carriers to simply eat the loss this year, bail next year and then sue to get the money owed them...but that could take years and God only knows what the federal judicial system will look like by that point.

UPDATE: I've cross-checked every one of the counties listed above with their respective Congressional District to get the following list of Republican members of Congress whose districts include Molina Insurance ACA exchange enrollees (I didn't bother listing the Democratic Representatives since every one of them wants the CSR payments to be formally authorized anyway).

If you live in one of the districts below and have a Silver Molina policy via the ACA exchange, you might want to consider giving their office a call and politely but firmly insist that they authorize the CSR payments so you don't lose your healthcare coverage in the next few weeks: 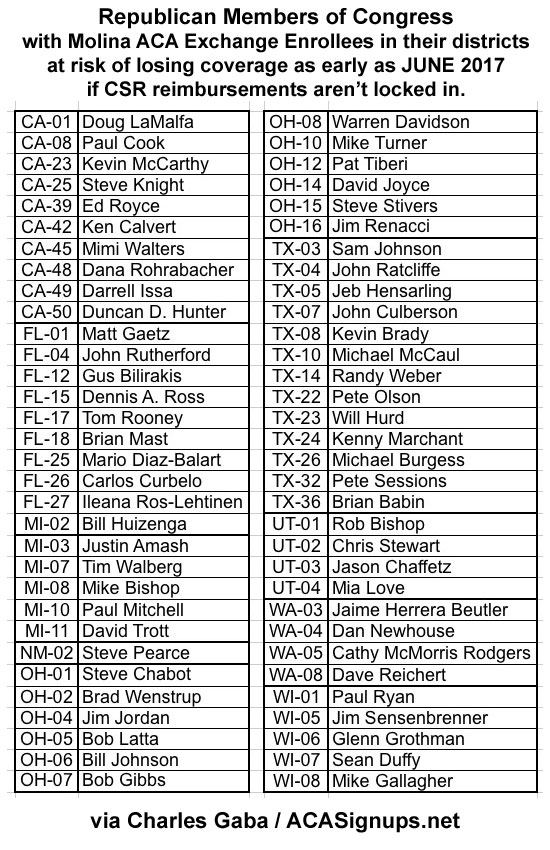