How many people would Trump's CSR threat screw? 6 to 18 million...

As I posted yesterday, here's a rough overview of what total Individual Market Enrollment has looked like since 2010, and how Trump's threat to cut-off CSR reimbursements would impact it: 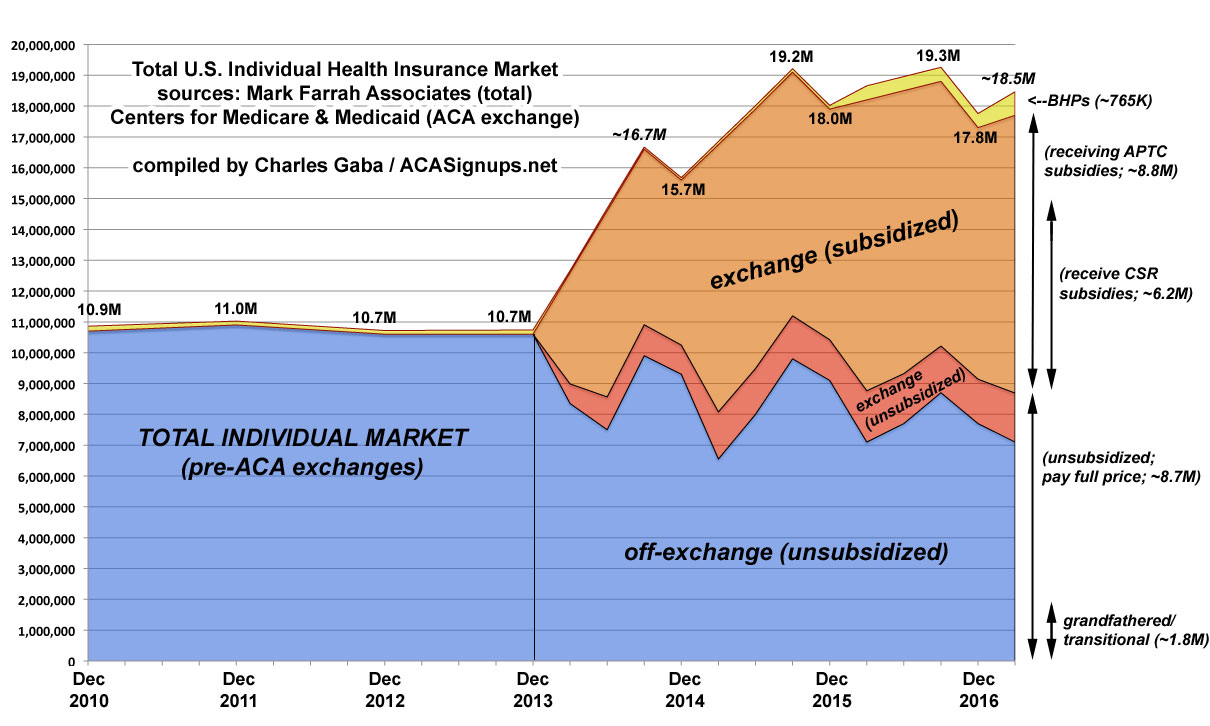 The blue section is off-exchange enrollees...around 7 million people today, all of whom are paying full price. This includes perhaps 1.8 million people still enrolled in Grandfathered or Transitional plans (which are part of a separate risk pool), although that number is highly speculative.

Around 12.22 million people selected exchange policies during Open Enrollment for 2017, but around 13% of these folks typically either don't pay their first premium at all or are dropped from their policies by the end of March for various reasons (legal residency issues, etc). That means there's likely around 10.7 million exchange enrollees still actually enrolled today. Of those, around 83% receive APTC (premium tax credits) and 58% receive CSR assistance. That's around 8.8 million with APTC and 6.2 million receiving both APTC and CSR today.

Here's a table breaking out the official APTC and CSR numbers for every state (NOTE: Washington State didn't include CSR data in the official CMS report for some reason, but later reported 72,000 CSR enrollees out of 182,000 as of February, or 39.5%. When adjusted to account for the additional enrollees whose policies started in March and then for nonpayment attrition, this should be around 80.7K today). 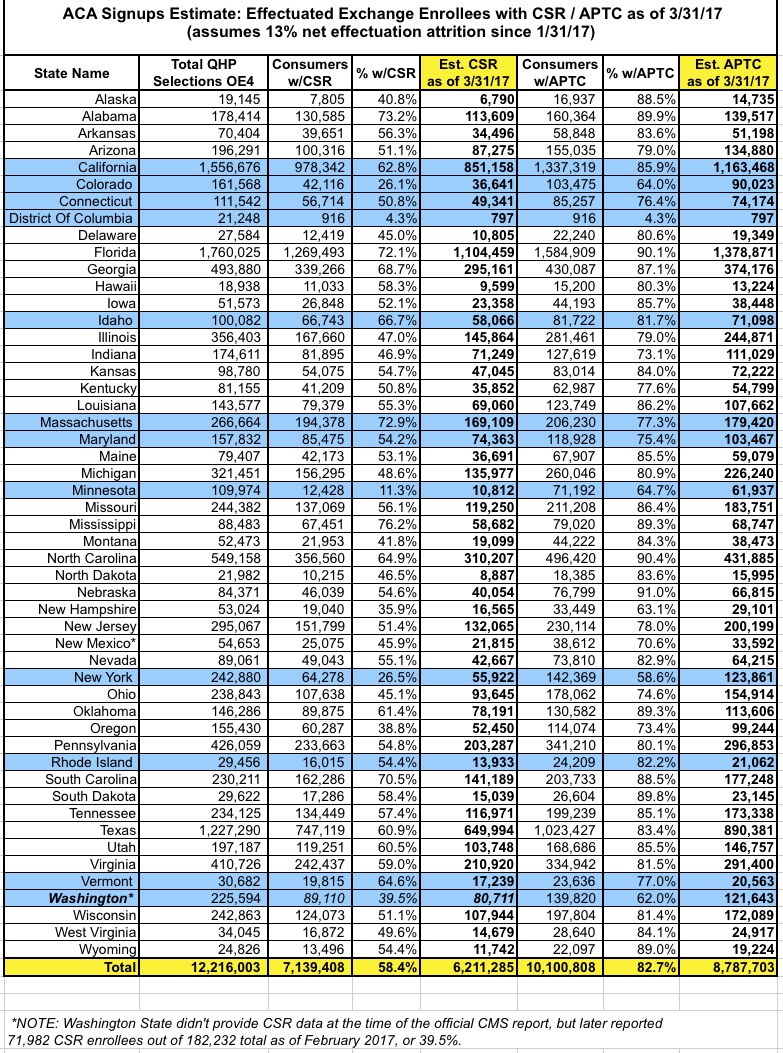 The red section in the graph at the top represents the other unsubsidized ACA exchange enrollees (around 1.7 million people). Add this to the off exchange number and that's roughly 8.7 million people paying full price for their policies.

The orange section is the ~8.8 million subsidized enrollees, including the 6.2 million receiving CSR.

If Trump makes good on his threat to cut off CSR payments, you would think that these 6 million would be the ones screwed, right? Well, yes and no.

You see, CSR works differently from the premium tax credits (APTC). With CSR, the insurance companies cover the CSR costs, then are reimbursed by the government. They're legally required to keep covering CSR costs regardless of whether they're reimbursed or not.

This means that as long as their exchange policies are in effect, those 6.2M people will continue to receive both APTC and CSR assistance; nothing will change for them.

The carriers, however, would do one of four things:

1. Immediately (as in, THAT MONTH) terminate those policies via an exit clause in their contracts. This is probably unlikely for most, since state laws likely would turn it into a legal and PR mess for them. If it did happen across the board, however (and the terminations held up in court), anywhere from the 6.2 million with CSR to all 10.7 million exchange enrollees would lose coverage immediately (I'm still a little fuzzy as to whether the exit clause would only apply to CSR policies or to all exchange plans).

2. Stick around both on and off exchange in 2018...but jack up prices dramatically to cover the lost CSR reimbursement. This wouldn't effect subsidized enrollees much since the APTC would increase accordingly...but the 8.7M *unsubsidized* enrollees would see their rates jump by about 19% on average...and that's an ADDITIONAL 19%beyond however much they'd go up otherwise.

4. Drop out of the individual market ENTIRELY (on & off exchange) as Humana has already announced. This would wipe out BOTH the subsidized & unsubsidized markets.

In any of the above scenarios, 6 to 18 million people would either lose coverage entirely or see rates skyrocket...it's just a question of *which* groups.

Most likely it'd be some combination of 2, 3 & 4, depending on the county/state/carrier.