Based on data filed in statutory financial reports from the NAIC (National Association of Insurance Commissioners) and the CA DMHC (California Department of Managed Health Care), MFA's assessment of Individual, Non-group medical plans, both "on" and "off" the exchange, found aggregate year-over-year enrollment declined by 1%, from 19.1 million in September of 2015 to 18.8 million in September of 2016. In contrast, Individual membership grew 4.9% between 3Q14 and 3Q15 reflecting a notable year-over-year increase. However, insurers were beginning to realize the adverse financial effects resulting from the growth in the individual market and the Affordable Care Act's (ACAs) premium stabilization programs (reinsurance, risk adjustment and risk corridors) failure to reduce or mitigate the overall financial uncertainty in the early years of the exchanges.

Here's what they just released regarding the individual market as of December:

MFA's assessment of Individual, Non-Group medical plans, both "on" and "off" the exchange, found aggregate year-over-year enrollment saw a 3% decline from 17.9 million in December of 2015 to 17.3 million in December of 2016. This is a notable difference from the 5.8% increase in Individual membership between 2014 and 2015, adding approximately 990,000 more members year-over-year due to growth from the exchanges. However, the volatility of the Affordable Care Act's (ACAs) exchange program forced many insurers to dramatically raise premiums in order to make up for financial losses or withdraw from the exchanges altogether, negatively impacting membership in 2016.

Unfortunately, they didn't do quarterly estimates in Q1 or Q2 either year, but Farrah did provide their December (Q4) individual market enrollment estimates for every year starting in 2010 for this Kaiser Family Foundation report.

I've taken whatever total Individual Market reports I could find from Mark Farrah, combined them with the ACA exchange effectuation reports from CMS, and thrown in the BHP reports from Minnesota and New York to piece together the following graph. I debated whether to include BHPs since they're technically part of a separate risk pool, but the numbers are still small enough not to have that much of an impact overall. Besides, I don't know what portion of the off-exchange market consists of grandfathered/transitional plans either, and those are part of a separate risk pool as well.

It's admittedly crude and imperfect, but when I add them all up, here's roughly what total enrollment on the individual market has looked like for the past 7 years: 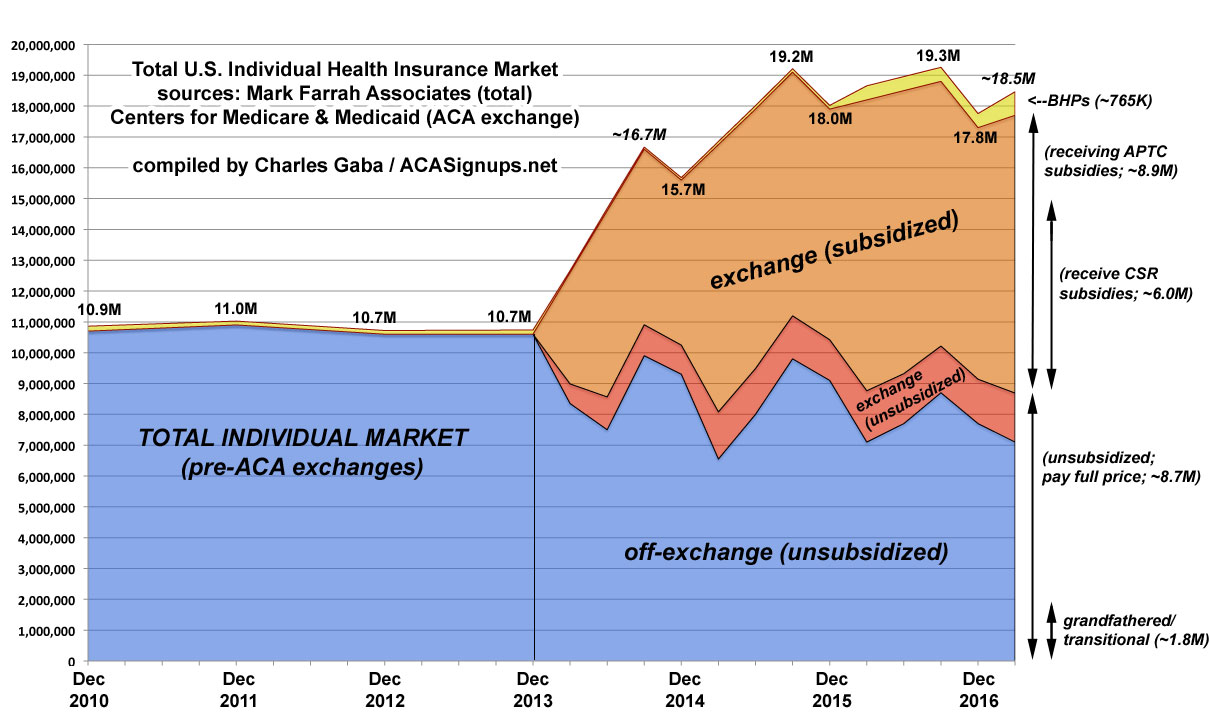 The pre-ACA section is a fairly smooth line parlty because it didn't change that much but mainly because I only have the Q4 number for each year. Since the exchanges launched in 2014, I have quarterly numbers (or close estimates) for the exchange enrollments and some quarterly numbers for the total market from Farrah's reports.

Unfortunately, I have no hard data on how much of the off-exchange market consists of Grandfathered or Transitional plans, though I estimate that these are down to around 1.8 million combined as of today.

In any event, the individual market may be down from it's peak of a year and a half ago, but it's still over 60% larger than it was in 2013. The question is whether (assuming it doesn't fall apart due to a combination of "pre-existing conditions" (hah!) as well as sabotage/negligence by the Trump administration) it can grow beyond the 20 million mark which seems to have been it's ceiling until now.