CAP does me one better: How many would lose coverage if the AHCA *specifically* becomes law?

I've spent the past two months painstakingly crunching the numbers in an attempt to project just how many people would likely lose their healthcare coverage if the ACA were to be: a) fully repealed; b) with immediate effect; and c) without any substantive replacement policy put into its place.

My conclusion, after much analysis, double-checking and updating, is that the grand total would be roughly 24 million people: Around 8.2 million current exchange enrollees, nearly 15 million via Medicaid (expansion or otherwise), and the 750,000+ people enrolled in BHP programs in Minnesota and New York.

However, as I've stressed repeatedly, these numbers assumed no replacement...that is, a full, clean repeal of the entire ACA, full stop, with no additional healthcare legislation beyond that. Some people pointed out, rightly so, that this was a bit of a strawman analysis on my part since "of course!" there would be a replacement policy! However, until a couple of weeks ago, there was no specific bill on the table to compare, so "full repeal/no replacement" was all I had to work with.

Then, Paul Ryan and the House GOP introduced the AHCA (Trumpcare) bill, and there was something tangible to compare against the current coverage situation.

Last week the Congressional Budget Office released their score of the AHCA...and guess what they concluded?

Later, following additional changes to subsidies for insurance purchased in the non-group market and to the Medicaid program, the increase in the number of uninsured people relative to the number under current law would rise to 21 million in 2020 and then to 24 million in 2026. The reductions in insurance coverage between 2018 and 2026 would stem in large part from changes in Medicaid enrollment—because some states would discontinue their expansion of eligibility, some states that would have expanded eligibility in the future would choose not to do so, and per-enrollee spending in the program would be capped. In 2026, an estimated 52 million people would be uninsured, compared with 28 million who would lack insurance that year under current law.

Yes, that's right...the timeframe would take longer since the provisions would be stretched out over several years, but in the end, the CBO concluded that Trumpcare would end up kicking an additional 24 million people off their healthcare coverage...the exact same number I projected without any replacement plan. As I concluded:

In other words, according to the Congressional Budget Office, the Republican Party’s “replacement plan” for Obamacare is just as useless and cruel as repealing without any replacement whatsoever.

Now, the breakout of the CBO's projections assuming Trumpcare becomes law vs. repeal w/out replacement is a bit different. They still assume roughly 15 million losing Medicaid coverage, but figure that "only" 5 million of this would be from the expansion category while the other 10 million would come from the non-expansion population. They assume "only" around 3 million exchange/BHP enrollees would lose coverage...but 7 million would be kicked off of their employer-sponsored plans. Add it all up and it's the same number of people, just divvied up differently.

Anyway, the Center for American Progress has done something similar to what I did, based on the AHCA itself, and have gone above and beyond by breaking that 24 million total out not only between ESI, Exchange and Medicaid, but even down to the number of Adults Children, Disabled, Elderly and Expansion enrollees within the Medicaid category. While the national total remains the same, the state and congressional district-level totals vary widely from mine due to the different methodology.

For example, here's my "Full Repeal/No Replacement" breakout for Michigan, along with the Center for American Progress "Partial Repeal/Trumpcare Replacement" projections: 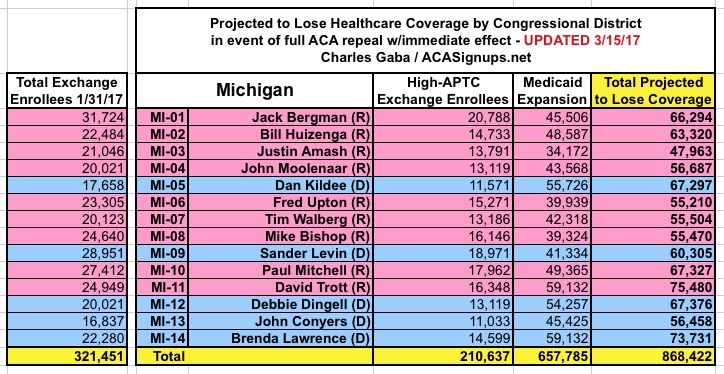 In case you're wondering about the "Medicaid (Elderly)" column, here's the explanation for why they're listed in the table but not included in the grand total column:

Only the nonelderly, however, are included in the CBO’s projection of Medicaid coverage cuts. We estimate that an additional 1.4 million seniors—or about 3,300 in each district—could be stripped of Medicaid coverage due to the AHCA’s caps on funding for that program. Although these seniors would still be insured by Medicare, they currently depend on Medicaid for financial assistance with premiums, out-of-pocket costs, and long-term care. The per capita caps on Medicaid spending could jeopardize nursing home access for seniors and their families.

In other words, in Michigan, about 43,000 seniors would lose part of their coverage.

Aside from that, the breakout within each category and congressional district is quite different...but the statewide total is actually pretty close: 794K vs. my 868K estimate. Looking at it from another angle, if you were to "count" each of those 43,400 seniors as "half" a person losing coverage, that'd be around 22,000 more added, for around 816,000 total...within 6% of my "no-replacement" estimate. The actual CAP totals are higher or lower than my estimates depending on the state, of course. For instance, here's Missouri (which didn't expand Medicaid in the first place):

In this case, while CAP estimates that only about 30% of exchange enrollees would lose coverage under the Trumpcare scenario, they project that over 140,000 non-ACA Medicaid enrollees would be screwed, along with 139,000 losing employer-sponsored coverage, for a total nearly twice as high as my "no replacement" projection.

I strongly advise checking it out!