So, it's finally here. After seven years and over 100 entries, Huffington Post healthcare reporter Jeffrey Young can finally shut down (or at least archive) his famous "JUST IN TIME!" Storify collection, which has been chronicling the endless empty promises of the Republican Party insisting that their "replacement plan" for the Patient Protection and Affordable Care Act was going to be revealed at any moment.

Yes, after seven years, it's finally here (Part 1) and here (Part 2). It has a catchier title than the ACA ("The American Health Care Act"), which is typical of Republican bills. Remember George W. Bush's "Healthy Forests Initiative", which actually opened previously protected forest areas to logging, often unnecessarily or under false pretense? See, it has the word "American" right there in the title, so it must be good, right? I'll be abbreviating tthis as "AHCA", although they're already annoying me by spelling "healthcare" as two words (I strongly believe it should be one).

Here's the stuff which supposedly can't be changed via the reconciliation process, and is therefore might not be touched...yet. That is, these are changes which would suppposedly either require 60 votes in the Senate or would require the GOP to kill the filibuster entirely to push through:

All of the above sounds great at first glance...but again, keep in mind that for the most part this is only because they can't touch them without 8 Democratic Senators agreeing to do so...or killing the filibuster, which they could still do. That's a hell of a Sword of Damocles to be hanging over everyone's head.

OK, so what would change via the AHCA, assuming they manage to pass it with simple majorities in the House and Senate, and Trump signs it (which I'm certain he would)?

In no particular order...

As I noted the other day, between the income-based-to-age-based tax credit change and Medicaid expansion being cut off to nearly 15 million people, this completely reverses the categories of people who are helped by or hurt by the healthcare law (see charts below). Under the ACA, people under around 250% FPL are helped a lot, those from around 250% - 350% are helped a little, and those over 400% aren't helped at all (and for several million people in that range, yes, they're having to deal with real problems paying their premiums and deductibles). The obvious solution to this would be to beef up the income-based credits by raising the cut-off threshold to, say, 500 or 600% FPL and increasing the credits and CSR reimbursements below that threshold.

I've modified both of the "who's helped/hurt" charts a bit to give a closer apples-to-apples comparison. As you can see, the ACA primarily helps those in the lowest income brackets while not helping those at the upper end at all...while the GOP bill is the exact opposite. 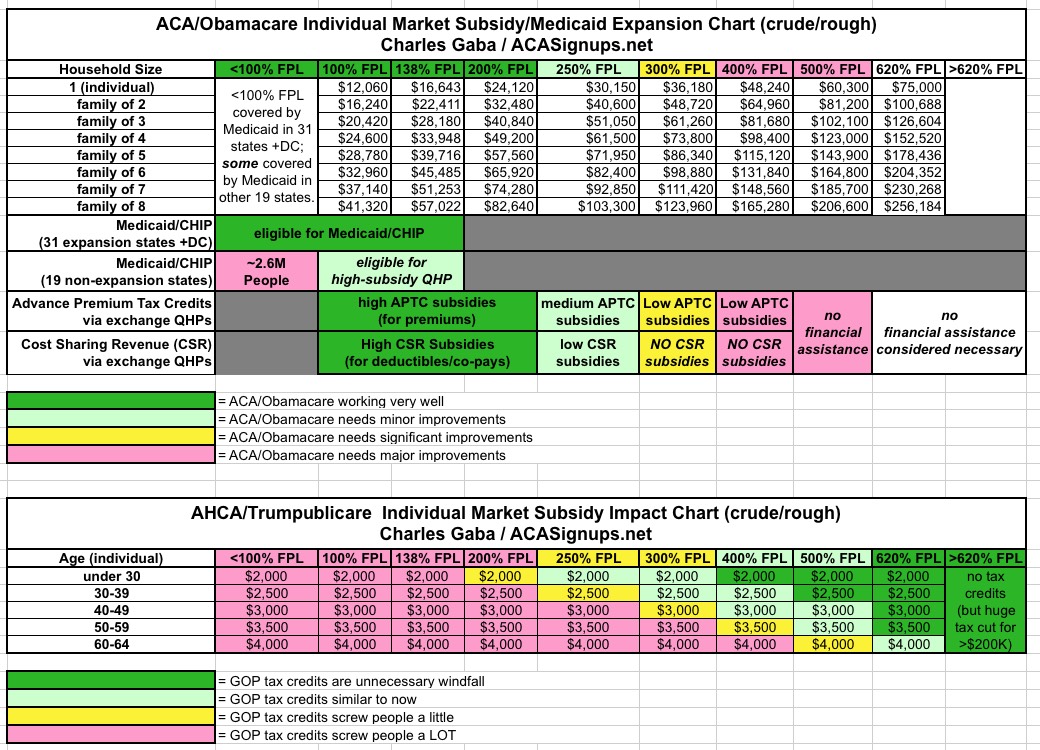 As an aside: There is exactly one good reason to use age-based credits instead of income-based: Administration and verification. Basing them purely on age, at the very least, would mean enrollees wouldn't have to provide all sorts of documentation of their income from year to year. However, by reducing credits starting at $75K and up, the AHCA would still require proof/verification of income just as the ACA currently does...which means eliminating even that already weak upside.

Oh, yeah, and speaking of the overhauled tax credits...

In other words, the GOP's Obamacare replacement bill simply substitutes a different financial penalty for not being insured than the ACA's. If you go uncovered for more than 2 months in a year, you have to pony up an extra 30% on top of whatever the regular premium is for whatever policy you do sign up for...for a solid year. In many (most?) cases, this would likely end up being a higher penalty than the Individual Mandate tax already is! Let's say the policy you're looking at runs $300/month. 30% of that is $90, so you'd have to pay an extra $1,080 for the policy for a year before it drops back to the normal rate. If you have a family plan for, say, $1,000/month and your whole family went without coverage, you'd have to pay an additional $3,600.

Whether you'd end up paying more or less of a penalty depends on the specifics of your situation, of course, but there is no way anyone can argue that this "gets rid of" the mandate. I suspect a lot of Trumpsters are gonna be pretty pissed off when they find out that the "Obamacare Penalty" has simply been replaced with the "Republican Penalty".

"Best" of all? Unlike the ACA, where the mandate penalty is paid to the IRS (that is, to the federal government, so at least it might go towards something useful, like funding the law itself), under the AHCA, you pay the penalty directly to the for-profit, private corporation. I'm honestly not even sure if that's legal--technically what you have here is the federal government legally mandating that private companies charge a specific amount for a service to their customers.

Oh yeah, and one more thing:

It includes a big tax break for insurance companies that pay their CEOs more than $500,000 per year.

One provision in the House GOP’s proposed Obamacare replacement plan would essentially incentivize major corporations to overpay their top executives — offering a tax break to insurers that pay CEOs more than half a million dollars per year.

Why? Absolutely NO REASON WHATSOEVER other than to be a massive giveaway to fat-cat CEOs. Basically an open bribe to get them to support passage of the bill.

There's some other stuff here as well, but I think that covers most of it. Some of this is changing stuff just to change it. Some of it is "good" in the sense that it's not changing anything at all (at least under reconciliation, that is). However, the single biggest sin here is that it would kick tens of millions of poor and low-income people off of Medicaid...for the sole purpose of allowing a massive tax cut to the ultra-rich.

Which, of course, is the whole point.

Oh, and that reminds me...how, exactly, are they planning on paying for their bill, seeing how it would also wipe out nearly all of the current funding mechanisms (it keeps some around for 1 year, and would actually keep the ACA's "Cadillac tax" on high-end employer plans around...except that wouldn't kick in until 2025, some eight years from now, which might as well be another century in political time)?

As Matthew Yglesias noted at Vox:

while the GOP plan does reduce outlays on both of those things, it doesn’t eliminate either of them. So that opens up a potentially large fiscal hole. And according to House Republicans’ Frequently Asked Questions page, their plan for what to do about this is, well, they don’t have one:

How are you paying for this plan? How much is it going to cost taxpayers?

We are still discussing details, but we are committed to repealing Obamacare and replacing it with fiscally responsible policies that restore the free market and protect taxpayers.

When the ACA was passed, it caused some amount of disruption, to be sure, but at least there were positive reasons for doing so.

The AHCA, by contrast, appears to be designed to cause a massive amount of disruption...without fixing any of the legitimate issues the ACA has, while creating a whole lot of new problems, devastating millions of low-income Americans, hurting women, the elderly and children...all for no other reason than giving a huge tax cut to people who have absolutely no need or justification for receiving one. As I noted on Twitter earlier, it's sort of like Windows Vista compared to Windows XP...it's newer, but DOESN'T FIX ANY ISSUES while BREAKING MUCH OF WHAT DOES WORK.

In fact both left-leaning Ezra Klein (of Vox.com) and right-leaning Peter Suderman (of Reason.com) wrote nearly identical thinkpieces this evening:

Actually, I can answer that question: There are two "problems" they're trying to "solve" here:

This bill, if passed, will hurt tens of millions of people for no good reason. It's cruel, fiscally stupid, intellectually stunted and politically nonsensical.

In other words, the perfect bill for the modern Trumpublican Party.