At Long Last, House Republicans Reveal...the same warmed-over nonsense they had a year ago (Part One)

Yesterday was supposed to be a Big Day for Congressional Republicans, as they were set to finally reveal their Master Plan to replace the Affordable Care Act. Speaker of the House Paul Ryan held a press conference about it, and they even released a 19-page "Policy Brief" which purported to explain it to everyone. Hooray! They were hoping that the entire news universe would be singing their praises all day long.

That didn't happen, however, for two reasons. FIrst, because Donald Trump's bizarre, surreal press conference, complete with racist and anti-semetic incidents, pretty much sucked all the oxygen out of the news cycle. The other reason is that their "policy brief" didn't really include much that we hadn't seen before. As Jeffrey Young of the Huffington Post put it:

It was basically the same as what Ryan and the leadership outlined over the summer with “A Better Way” proposal.

It calls for replacing the Affordable Care Act with a much weaker set of insurance regulations and tax credits that are based on age, rather than income. It also proposes phasing out the expansion of Medicaid, and then transforming the entire low-income health program by giving states more control and reducing federal funding.

Like the Better Way proposal, this new paper doesn’t include specifics, such as the value of those tax credits, or the actual formula for calculating Medicaid funds. Ryan, in his press conference, said his leadership team had submitted proposals to the Congressional Budget Office and Joint Committee on Taxation to evaluate how the proposals will affect insurance coverage and the budget.

That could mean Republicans have agreed on the numbers and aren’t making them public yet, or perhaps that they are close and just fine-tuning them.

It could also mean that, once again, Ryan is trying to create the illusion of progress, as he and other Republican leaders have been doing now for six years, 11 months and counting.

Well, first of all, while it is indeed technically 19 pages, 6 of those are title cards only (the cover page, blank back page and section titles with nothing whatsoever on them other than "FACTS", "POLICY" and so on). Several more pages basically just rip on the ACA for sucking, and 1.5 pages consist of footnote web links. The actual policy description makes up, by my count, just 6 1/2 pages of the total. "Brief" indeed. To be fair, I'm not sure whether that's typical for this sort of thing or not. I'm sure the ACA itself was only 6-7 pages long at some point in it's gestation...but I'm guessing that by the time it was actually voted on, it was a bit more specific.

Anyway, there's a bunch of other folks who have picked apart the brief in detail, such as this one from the Center for American Progress or this one from the New York Times, so for the moment I'll just hit on a few items which leapt out at me on the "Key Obamacare Facts" page. I'll look at the actual GOP policy part later:

Actually, the "25% average increase in premiums", while definitely a problem, primarily apply, ironically, to those not enrolled in HealthCare.Gov (85% of those enrolled in the exchanges receive tax credits which generally match the rate hikes, so most of their premiums only went up nominally). The hikes are a legitimate issue for the other 15%, plus another 6-7 million enrolled outside of the exchanges, of course.

True, although the same study found that the 31% of counties with only 1 insurer only represent 19% of the population. Again, this is still a real problem (and Humana's announcement that they're dropping out of 11 states will make it worse next year), but seeing how counties aren't people, that's a pretty important distinction.

Well...again, not quite. That many people did originally receive notices that their policies weren't compliant with the ACA and would be discontinued effective 12/31/13, but most of those cancellations were later rescinded after the HHS offered up the "transitional plan" extensions. Granted, that policy change probably wasn't a very good idea in retrospect in terms of the impact on the risk pool, but the fact remains that only 1-2 million people actually had their policies cancelled directly as a result of ACA noncompliance.

Obviously several million other people have had their plans discontinued since then due to carriers deciding to drop out of the exchanges or the individual markets entirely, but that's not quite the same thing.

Of course, one of the main reasons (not the only one, but a major one) many of those Co-Ops failed in the first place was due to Republicans deliberately sabotaging the ACA's Risk Corridor Program.

The "$53 billion in regulations" claim comes from the American Action Forum (a right-wing think tank outfit). They have a pretty handy, interactive "regulation rodeo" tool which I admit is very slick.

I decided to take a look and see where some of that "$53 billion" comes from. Here's an example:

Wow...$531 million dollars per year to label the calories on vending machine products?? That sounds like a lot of money. Let's click through... 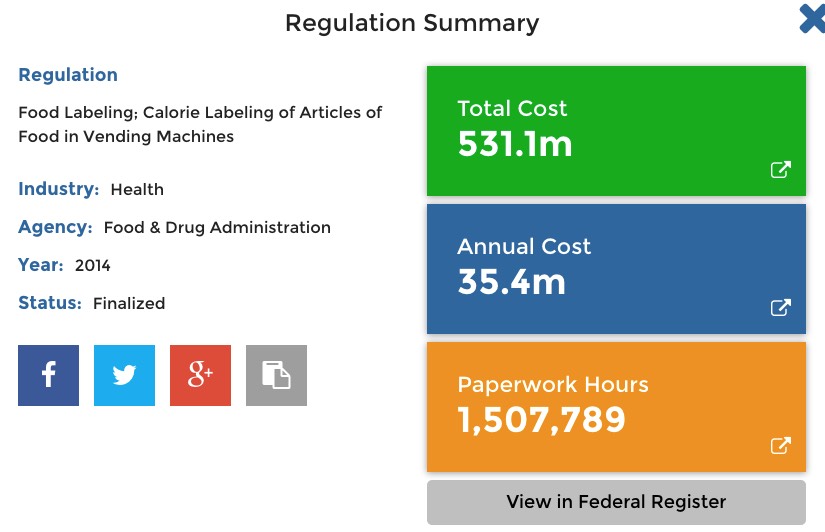 Oh. It turns out that it's actually only about $35.4 million per year. The $531.1 million figure is stretched out over a 20 year period (the 20-year total is lower than simply multiplying $35.4 million x 20 due to multi-year discounts). 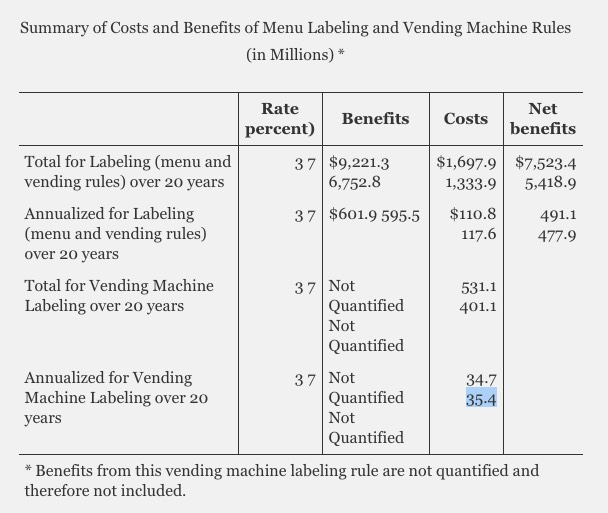 Now, there's nothing wrong with presenting the anticipated costs of a law for multiple years (although I think the CBO usually cuts it off at 10), but if you're gonna do that, you should make sure that's understood up front, dontcha think?

Also, check out this note from the actual Federal Register: 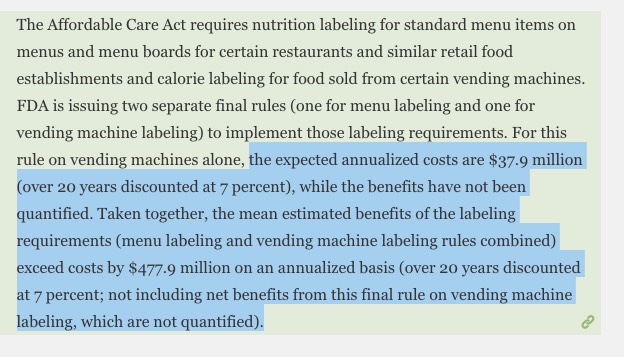 "...the mean estimated benefits of the labeling requirements...exceed costs by $477.9 million on an annualized basis...not including net benefits from this final rule".

As far as I can tell, the "net benefits" refer to people making healthier vending machine snack choices, therefore being less likely to have medical problems which make them a burden on the healthcare system, and so on. I'm honestly not sure how they're able to fine-tune actuarial science to be that specific, but if Paul Ryan is going to use the American Action Forum as one of his primary bullet point sources, it's fair to use the entire source, not just the part he likes.

But it gets worse. Let's look at another example from the American Action Forum database:

OK, Medicare Part D. The ACA fixed the prescription drug "donut hole" created by the original Part D legislation (you know, the one pushed through by Republican President George W. Bush), and obvoiusly that requires some fiddling with the paperwork, which evidently costs $60.1 million, right? 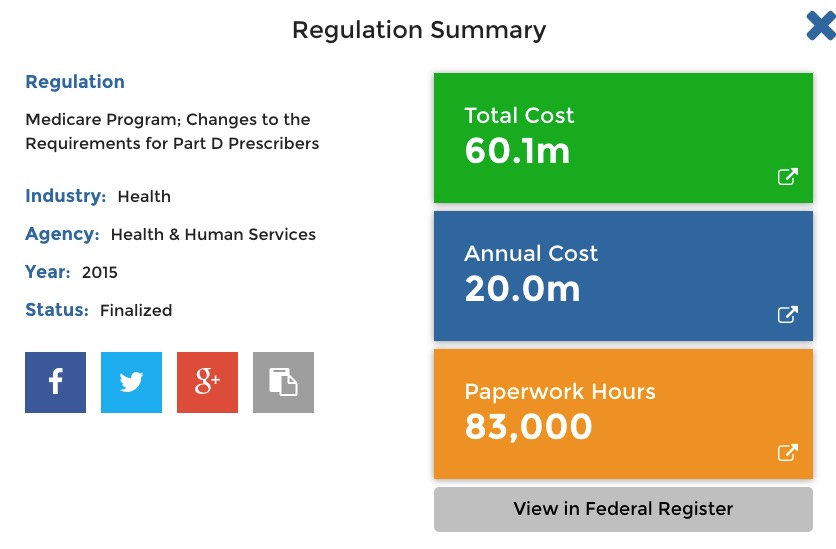 Whoops! Again, that turns out to consist of a one-time $56 million bill to overhaul the system, followed by less than $2.2 million per year after that for sending out notifications:

Again, there's nothing wrong with listing these costs, but in the first case it was a 20-year total while in the second it's only 3 years. From the table above, it looks like they anticipate that by 2018, all of the change notifications will have been sent out and there wouldn't be any additional costs from this particular program.

According to Paul Ryan and the House Republicans, these two regulations are/will cost taxpayers a combined $591.2 million dollars...but again, it's an apples to oranges comparison due to the timeframes involved. Since they want to use a 20-year period, that's actually an average of $29.6 million per year. I'm guessing the rest of the regulatory costs listed jump all over the place--some might be for 1 year, some might be for 20, some are anywhere in between.

In some ways this reminds me a lot of this old chestnut:

Those "159 new boards, agencies & programs" appear to be listed here. I'm not going to check to see if all 159 are legitimate, but even if they are, there's no way that more than a handful of these would apply to any specific person. I hardly think that the "Office of Indian Men's Health" (#150) would have anything to do with me, a Sephardic Jew, for example.