UPDATE: Trump starts sabotage of ACA within hours of taking office: SIGN UP BY 1/31/17.

(note: too many updates in too short a period for me to even keep track of...)

At first, most healthcare reporters thought this was a fairly meaningless "mission statement" without much impact...

Trump also issued a memo to all agencies requesting that they begin to "ease the burden of Obamacare as we transition from repeal to replace," Spicer said. He declined to provide specifics on what various agencies might do in response to the president's directive.

HOWEVER, David Anderson (formerly Richard Mayhew) notes that Section 2, which instructs the HHS Secretary to "waive, defer, grant exemptions from or delay" any "fiscal burdens" o sounds an awful lot like telling them to be absurdly lenient regarding granting "hardship exemptions" from the individual mandate:

@MarkARKleiman section 2 is the meat. Defangs individual mandate by passing out hardship exemptions like candy on Halloween

Shortly thereafter, this started to look uglier than I thought after all. As Ashley Parker and Amy Goldstein note at the Washington Post:

The order, several paragraphs long, does not identify which of the many federal rules that exist under the ACA the new administration intends to rewrite or eliminate. In general, federal rules cannot be undone with a penstroke but require a new rule-making process to replace or delete them.

But in giving agencies permission to “waive, defer, grant exemptions from or delay” ACA rules, the order appears to create room for the Department of Health and Human Services to narrow or gut a set of medical benefits that the ACA compels insurers to include in health plans that they sell to individuals and small businesses.

The order’s reference to relief from financial burdens could mean that the administration might try to ease taxes that the ACA imposes on various parts of the health-care industry — though it is unclear whether that would be possible, since the taxes are contained in the law itself.

In short, this isn't nearly as dramatic or instant as him stopping carrier reimbursement of CSR payments (which could effectively wipe out nearly the entire exchange enrollment population in one shot), but it's also starting to look more serious than my initial post made it sound like. Sorry about that.

A disturbing exchange with Larry Levitt of the Kaiser Family Foundation confirms the above.

The biggest effect of this executive order could be waivers from the ACA's individual mandate penalty, with chaos in the insurance market. https://t.co/QJtOnaZu3d

President Trump's order signals that his administration will look to scale back the ACA where it can, not waiting for Congress.

Federal agencies have wide authority to grant waivers from the individual mandate, required benefits in insurance policies, and in Medicaid.

With this executive order, there should be no doubt that the Trump Administration is moving to unwind the ACA, but it won't be immediate.

Over at Vox.com, Sarah Kliff and Timothy Jost take a somewhat calmer view:

“Trump is going to have to comply with law, and that doesn’t allow him to repeal the Affordable Care Act unilaterally,” health law expert Tim Jost, a law professor at Washington and Lee College, says.

From this perspective, as much as it’s a political scream, it’s perhaps more of a practical whisper (at least for now).

1) Most of the paragraphs in the executive order start with seven important words: “to the maximum extent permitted by law.”

...For example, this executive order says that agencies should try to “waive” any costs or regulatory burdens on “makers of medical devices, products, or medications.” At first glance, this would seem like an order to repeal the health care law’s medical devices tax.

...The Trump administration has full authority to write new rules around the individual mandate — to give those without coverage more exemptions, for example — but before those rules go into effect, they’ll need to go through a similar process.

Jost is generally a supporter of the Affordable Care Act. And, based on these two reasons he outlined for me, this new executive order didn’t cause him much panic.

“I was worried he would do something unpredictable, but this is what I expected,” Jost says. “I think he’s been advised that he can’t repeal the Affordable Care Act through executive action, and now we see where this goes.”

However, one thing which Levitt and Ceci Connolly (of the Alliance of Community Health Plans) agree upon is that the best course of action for the moment is to sign up now, while you still can:

@charles_gaba I do. The window of opportunity to sign up for coverage is short, and there may be protections for people already insured.

Politically, the big unknown is whether or not Paul Ryan and Mitch McConnell will get away with trying to pin the blame for this on the Democrats/the law itself. That's why they've been pushing the "Obamacare is already in a death spiral!" claim hard for the past few weeks, even though it quite simply isn't. The individual market risk pool isn't in great shape, for sure, and in a couple of states the unsubsidized indy market it's not pretty at the moment...but the APTC/CSR subsidies, assuming they stay intact, keep it from spiraling out of control...which is exactly what they were supposed to do in the first place. They're not working perfectly, but they're working. That's what last fall's "25% unsubsidized average rate hike" business was all about...it pretty much ripped the band-aid off all at once, bringing the unsubsidized rates up to a stable level for the carriers.

Update: As Larwit1512 notes in the comments, this isn't necessarily the case--there's no way of knowing whether this years' rate hikes did the trick or not until next year when all the 2016 numbers are in...and due to the massive disruptions to the market already from Trump winning, the GOP already starting the repeal process and so on, there's not longer any "baseline" to compare with anyway. In other words, Trump winning itself may have already scared off enough low-risk enrollees from the indy market to start the "death spiral" process...but there's no way to know one way or another.

So, if this does end up in a worst-case scenario, Trump's "stop enforcing the mandate altogether!" order here could end up causing that death spiral even if the GOP doesn't technically end up repealing anything legislatively. The carriers would start announcing that they're bailing next year as soon as this spring (remember, the first paperwork for 2018 exchange participation has to be filed in April or May), and McConnell/Ryan would simply say, "See?? We told you it was collapsing all by itself! We didn't touch nuthin'!!"

This would be a big crock of shit, of course, but with a complacent media, most of which doesn't understand the cause/effect relationship at play here, I could easily see that being the pitch. The question is whether midterm voters would buy it or not: Would they blame Trump and the GOP Congress, or Obama/the Dems?

UPDATE: I nearly forgot about this post from early December: The GOP openly admits that this is exactly what they plan on doing:

That could lead to a mess for the roughly 10 million Americans currently getting coverage through the government-run marketplaces — and backlash against the GOP.

...But the enticements most likely to keep insurers in the exchanges are the ones in Obamacare that Republicans spent years denouncing as industry “bailouts” — subsidies that were supposed to insulate plans from big losses. 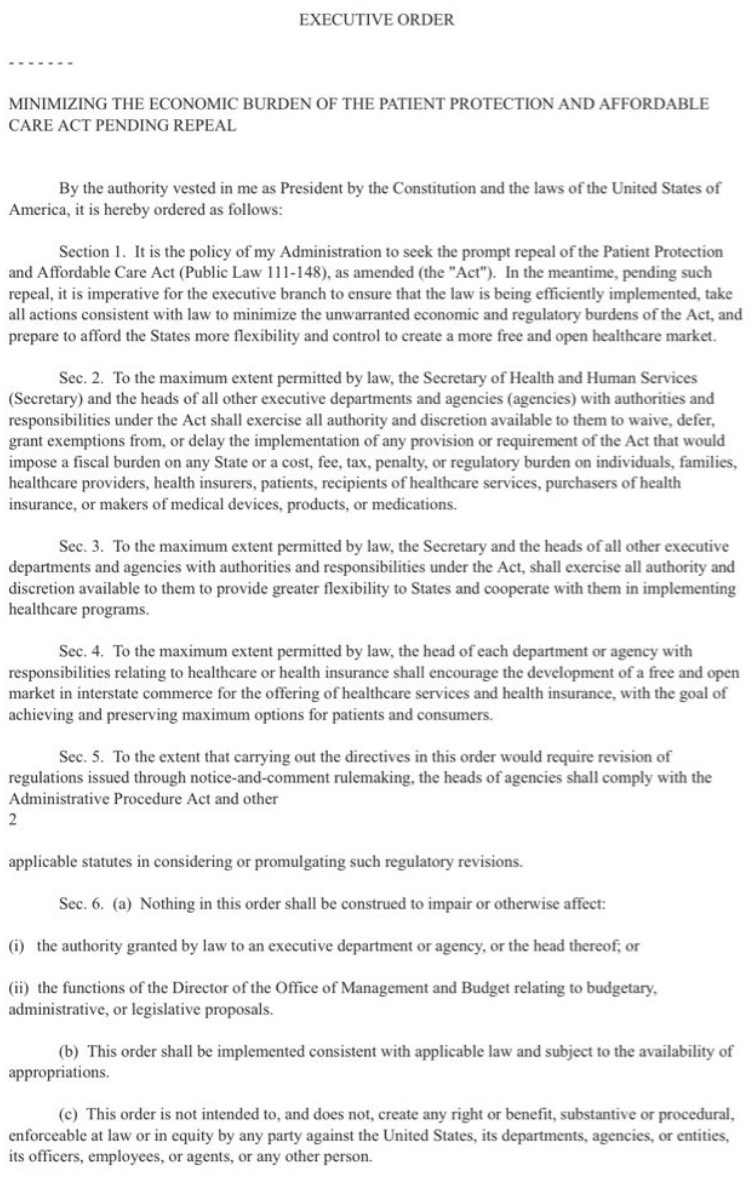