THE GRAPH: I've figured out how to add BHPs!

I've recently updated the enrollment numbers out of Idaho, Connecticut and New York. None of them have moved the needle much, but the latest New York number did finally goad me into making a decision: Going forward, I'm going to start including Basic Health Plan enrollments in my Open Enrollment Period totals.

I'll still be separating them out, since the "official" number which is generally counted by everyone (including myself) only includes exchange-based Qualified Health Plans (QHPs)...but unlike standalone dental plans, BHPs are full medical insurance policies, enrolled in via the ACA exchanges, and while they may resemble Medicaid in some aspects, they aren't in either category or funding source. Furthermore, BHPs are also "cannibalizing" quite a few enrollees who would otherwise be enrolling in QHPs anyway, so it's important to recognize their impact on the numbers.

I didn't worry too much about this for the first two years, because Minnesota was the only state with a BHP program (MinnesotaCare), and the numbers involved were too small to really register on the national Graph (around 60,000 - 90,000 depending on the point in time). Last year, however, New York jumped into the BHP arena (they call theirs "the Essential Plan"), and enrolled 380,000 people out of the gate. As of a couple of days ago, NY's BHP enrollment had leapt to a whopping 646,000 people.

When you add this to the 61,786 people enrolled in MinnesotaCare as of January 1st, the number of BHP enrollees now stands at 704,738 across the two states...far more than a rounding error nationally. The MinnesotaCare numbers are a bit confusing because unlike the NY program, most MN enrollees don't actually sign up through the exchange website (MNsure) even though the funding for the program is run through it. Instead, I'm relying on the official Minnesota Dept. of Human Services monthly reports, which put the numbers at 90,492 in November and 93,663 in December before actually dropping by 1/3 to 61,786 for January 2017...presumably because many of the earlier enrollees have to renew their enrollment for the new year but haven't done so yet.

Unfortunately, I can't simply roll the BHPs in with the QHPs...they aren't included in the official HHS/CMS/ASPE reports, so I'd have to constantly try to explain why my enrollment number is 700K higher than theirs. In addition, I'm not sure whether BHPs are included in the same risk pool or not; if they aren't, then that's another strike against including them.

Fortunately, I think I've figured out a simple way to visualize the BHP enrollees without messing with the QHPs. See the revised version of The Graph below.

Granted, it's a little late in the game to be doing this; if the ACA is repealed (or seriously messed with) by the GOP/Trump, this may all be moot soon. Still, it closes a loose end which has been bothering me for awhile now. 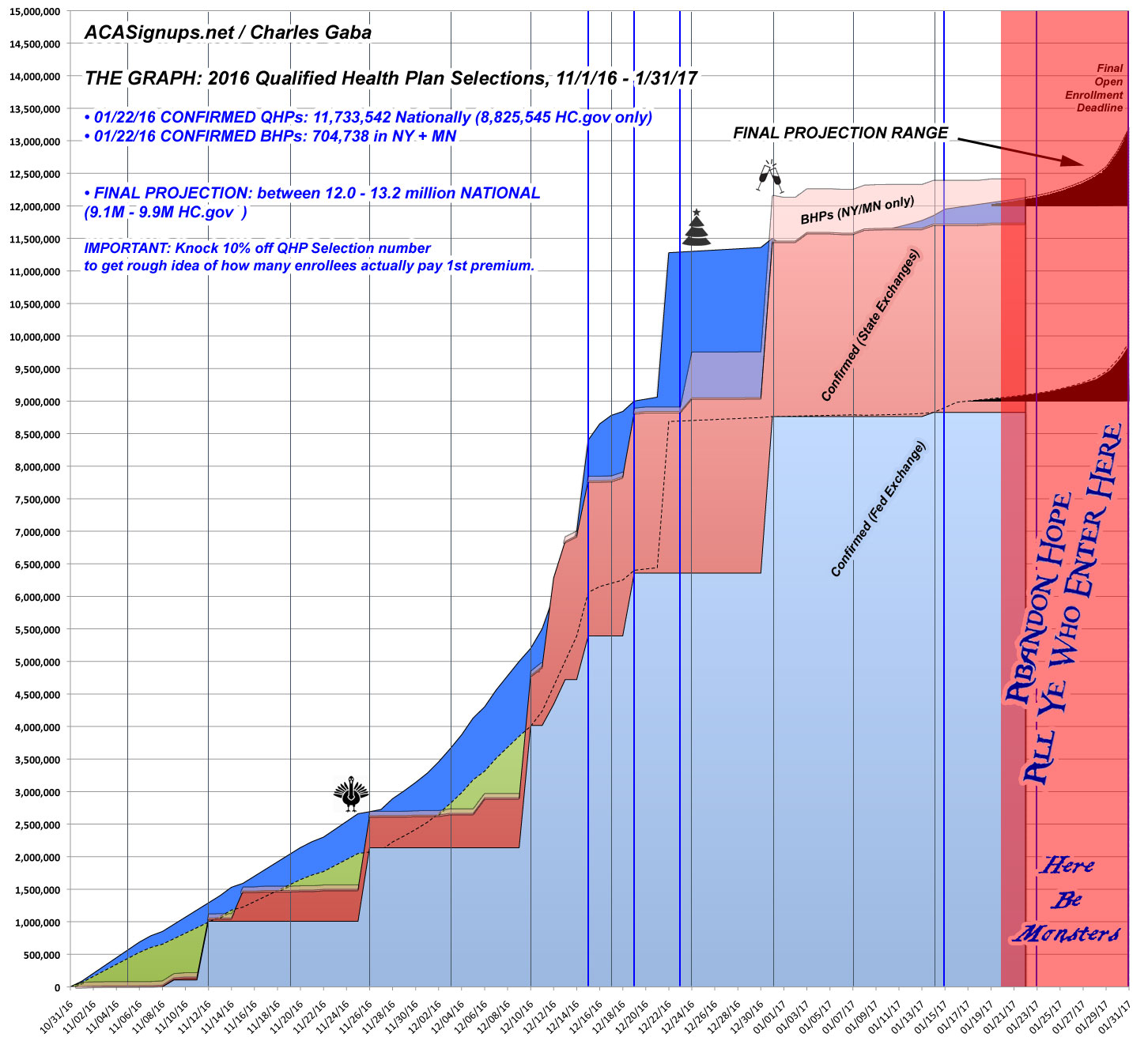