DEAR TRUMP VOTERS (and the rest of America)...

I've been seeing a lot of these tweets lately:

Overheard on the subway this morning: "I thought they were killing Obamacare, not the ACA. How am I supposed to get coverage now?"

Overheard waiting room convos: "I like the Affordable Care Act more than Obamacare" I'M SORRY WHAT

@AlecMacGillis Old white guy in Dr.'s waiting room, sitting next to me:"they said Obamacare would be repealed, not the Affordable Care Act!"

2 1/2 years ago I had to post the Great Conservative Kynect Challenge:

So, here's my challenge to you, Conservative Pundits: Will you tell your readers at Forbes, HotAir, the Daily Caller, NewsMax and (dare I say it) FOX News the truth? Will you state point-blank with no equivocation that Kynect, Obamacare and the Affordable Care Act are all the same Goddamned law?

Of course, "kynect" is mostly gone now (it's still being used as a brand by Kentucky, but mostly just as an information resource and to redirect residents to HealthCare.Gov, etc).

Which brings me to this, which is making the rounds today:

(sigh) OK...apparently there are stil a significant number of Americans who can't grasp the most basic elements of the ACA, so here goes: 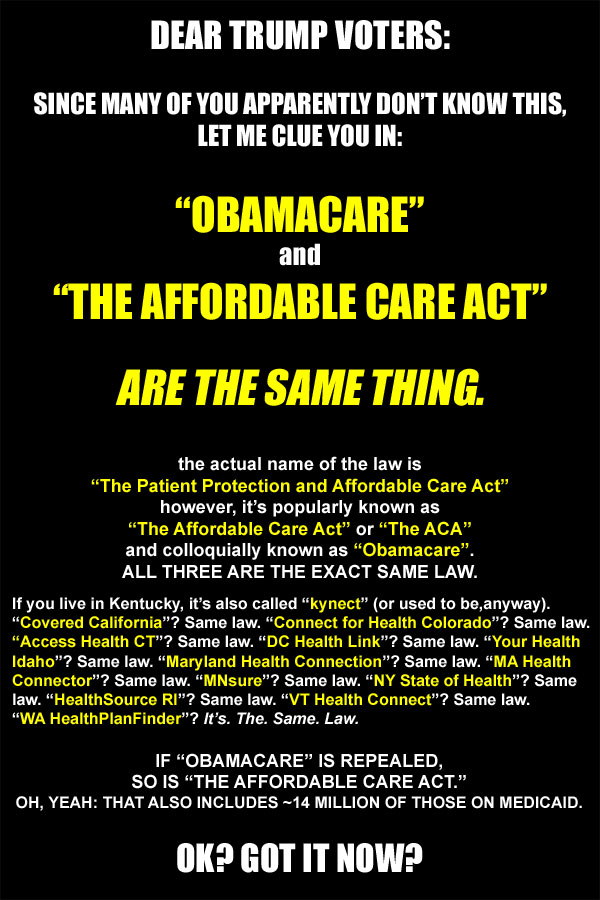