If Pence is Elwood, I guess that means Trump is Jake?

Message in the Pence meeting with the House GOP is that they're on "a rescue mission" for Obamacare, rather than repealing and killing it.

From the Bloomberg News link Spiro links to:

Republicans will first have to overcome a revolt from Senator Rand Paul on unrelated budget issues, with the Kentucky Republican saying Tuesday in an interview he would oppose the budget resolution because it adds significantly to the deficit.

"Every Republican that was here voted for a balanced budget amendment to the Constitution that said it should balance in five years, but yet they are putting together a budget that never balances," he said. Paul added he isn’t swayed by the argument that the numbers don’t matter and are merely a way to fast-track the Obamacare repeal bill.

Indeed, the resolution sees the deficit rising nearly every year before hitting north of $1 trillion in 2026 alone, with the national debt hitting $29 trillion that year.

Hm. Is PEOTUS suggesting Republicans put off action on Obamacare repeal in order to let it "fall of its own weight"? pic.twitter.com/XJ0yWRNKhy 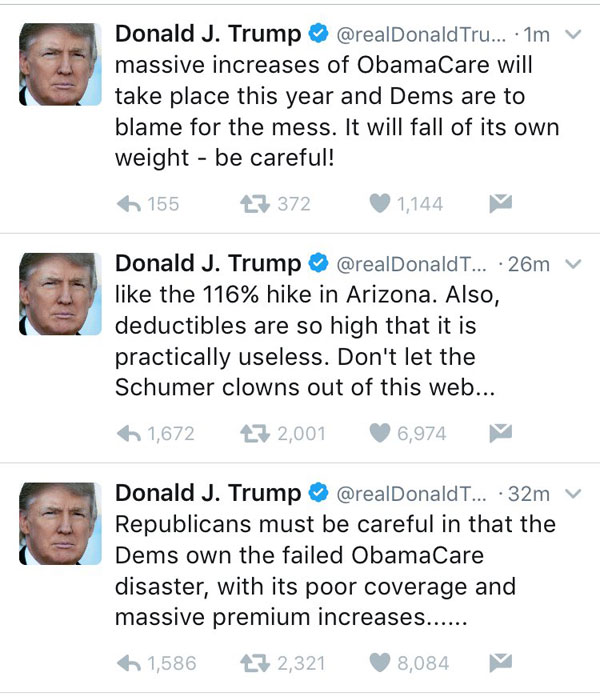 News: @Mike_Pence told Republicans Trump will issue some executive orders related to Obamacare on DAY ONE, per a House GOPer. No specifics.

Republican members leaving the meeting with Pence said the gathering felt like a "pep rally" but that there were not many policy details discussed. According to GOP Rep. Chris Collins, the party is eyeing the goal of crafting a replacement proposal in six months.

So, after 7 years of screaming about how horrible the ACA is, and over 50-odd votes to repeal the law, the Republican Party is "eyeing" the "goal" of "crafting" a replacement "proposal" in "six months".

Meanwhile, President Obama has a pretty clear message for the Democrats in Congress:

Less than three weeks out from leaving the White House, Obama visited Democratic lawmakers on Capitol Hill with a mission to save his signature healthcare reform law as Republicans are moving quickly to unroll the Affordable Care Act.

In the closed-door meeting, the President urged fellow Democrats to not "rescue" Republicans by helping them pass replacement measures, according to sources in the room.

He also floated this idea: Start referring to the GOP's new plan as "Trumpcare."

The suggestion was a clear indication of the Democratic Party's goal of turning the tables on Republicans, who are already facing pressure to quickly craft a replacement bill.

The feisty remarks from the outgoing President came as Republicans also huddled on Capitol Hill Wednesday morning to chart their path forward repealing Obamacare. Vice President-elect Mike Pence visited with GOP lawmakers in what became a morning of dueling meetings on Day Two of the new Congress.

Obama laid out the benefits of the Affordable Care Act in his meeting with Democrats, according to Rep. Maxine Waters, and argued that the country largely likes the law and that he has received countless letters thanking him for Obamacare.

Another lawmaker in the room said the mood among Democrats is "fired up."