Every month I post an entry about the official CMS Medicaid enrollment report, documenting the increase in Medicaid enrollment since ACA expansion went into effect. The numbers were increasing dramatically every month for nearly two years, but started slowing down last fall as most of the expansion states started maxing out on their eligible enrollees. I wrote about the August 2016 report back on 11/20, and normally would be writing about the September report today. Instead, however, I'm skipping right past September, because the preliminary report for October was just released today:

It looks like a few of the final numbers may shift around slightly after the final report comes out, but this should be pretty close to where things stood as of 10/31/16.

The 5.5 million in CHIP figure confused me until I read this clarification:

In other words, at this exact moment there are only 5.5 million children enrolled in CHIP, but at various points throughout the year a total of 8.4 million unique individual children have been for at least part of the year.

It also looks like it's just as well that I skipped over the September report because there appear to have been some data mismatch issues which had to be cleared up anyway:

Florida revised its enrollment methodology in October 2016 to incorporate its SSI population that is enrolled in Medicaid and to more closely report to CMS’s data specifications. The state subsequently revised total enrollment counts from prior months to reflect the updated methodology and ensure comparability across months.  However, Florida was not able to revise its baseline enrollment to account for its entire SSI population that is enrolled in Medicaid so its October enrollment and baseline enrollment figures are not perfectly comparable.

This figure (16,954,476 more people enrolled than September 2013) is actually a stunning increase compared to August's 15.7 million net growth figure, and actually dovetails perfectly with my own correction from a few weeks ago, in which I determined that ACA-specific Medicaid enrollment is over a million people higher than I had previously thought.

But it's even higher yet compared to the pre-ACA enrollment tally, because neither of those numbers includes the 950,000 people who were quietly added to Medicaid via other ACA provisions before the expansion program officially launched:

These enrollment counts are in addition to the enrollment increases from the nearly 950,000 individuals who gained coverage as a result of the Affordable Care Act before open enrollment began. Seven states implemented an “early option” to expand Medicaid coverage to adults with incomes up to 133 percent of the Federal Poverty Line (FPL) between April 1, 2010 and January 1, 2014, using new state plan authority provided by the Affordable Care Act or a demonstration under section 1115 of the Social Security Act building upon that authority.

When you add those people to the mix, Medicaid/CHIP enrollment is actually 17,904,476 people higher than it was the day that the Affordable Care Act was signed into law in March 2010...of which 12.3 million is due specifically to the ACA expansion provision.

The breakout of the 17.9 million is roughly:

Here's a simplified table from the October report breaking down the net gain since Sept. 2013 by state (the additional 950K prior to this isn't included here). There are two states (Connecticut and Maine) for which the CMS report doesn't include the September 2013 enrollment numbers. I've included a column which shows just how much of that net increase is due specifically to the ACA's Medicaid expansion provision.

I've also listed which U.S. Senators are up for re-election in each state in 2018. As you can see, Republicans Jeff Flake (Arizona) and Dean Heller (Nevada) will be under tremendous pressure not to repeal the Affordable Care Act; nearly 6% of Arizona's entire population and 7% of Nevada's are enrolled in Medicaid specifically due to the ACA. 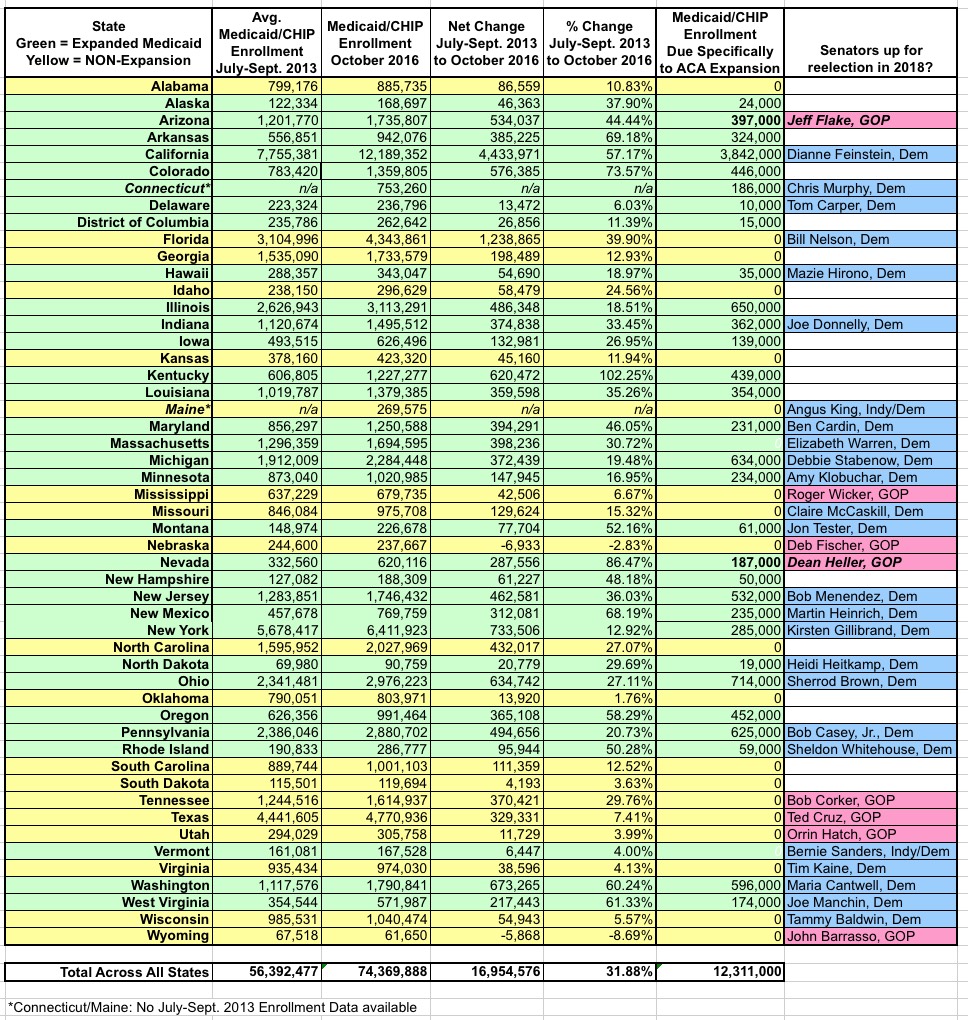