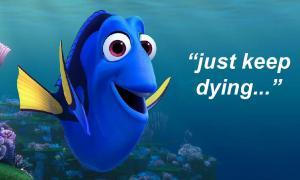 Donald Trump's campaign and its supporters spent a good portion of the 2016 campaign arguing that Hillary Clinton was secretly very ill and not up to the task of being president.

Trump's doctor, by contrast, isn't too worried about his patient dying in office — at least, not when it comes to the future of the country.

“If something happens to him, then it happens to him,” Harold Bornstein says. “It’s like all the rest of us, no? That’s why we have a vice president and a speaker of the House and a whole line of people. They can just keep dying.”

Why didn't anyone else ever think of this? No need to worry about "going to the doctor" or "receiving medical care"...it's much easier and more cost-effective for all of us to simply die!

If you're married or have children, no worries; you'll have a whole line of successors to pick up where you left off!

If you're single, I guess you're screwed, but you should've thought of that before you decided to keel over.