Earlier today I posted fully broken-down estimates of just how many people would be directly impacted by a full & repeal of the Affordable Care Act this spring, assuming that the repeal took immediate effect and there was no replacement plan in place for the various provisions of the law.

The largest single category of enrollees in my estimates are those enrolled in Medicaid/CHIP due specifically to the ACA's Medicaid expansion provision. I estimated this to be roughly 11.3 million people nationally.

However, I was just informed of a new report released by the Foundation for Government Accountability, an anti-ACA think tank, which has compiled their own estimates of ACA Medicaid expansion enrollment on a state-by-state level. Here's what they've come up with: 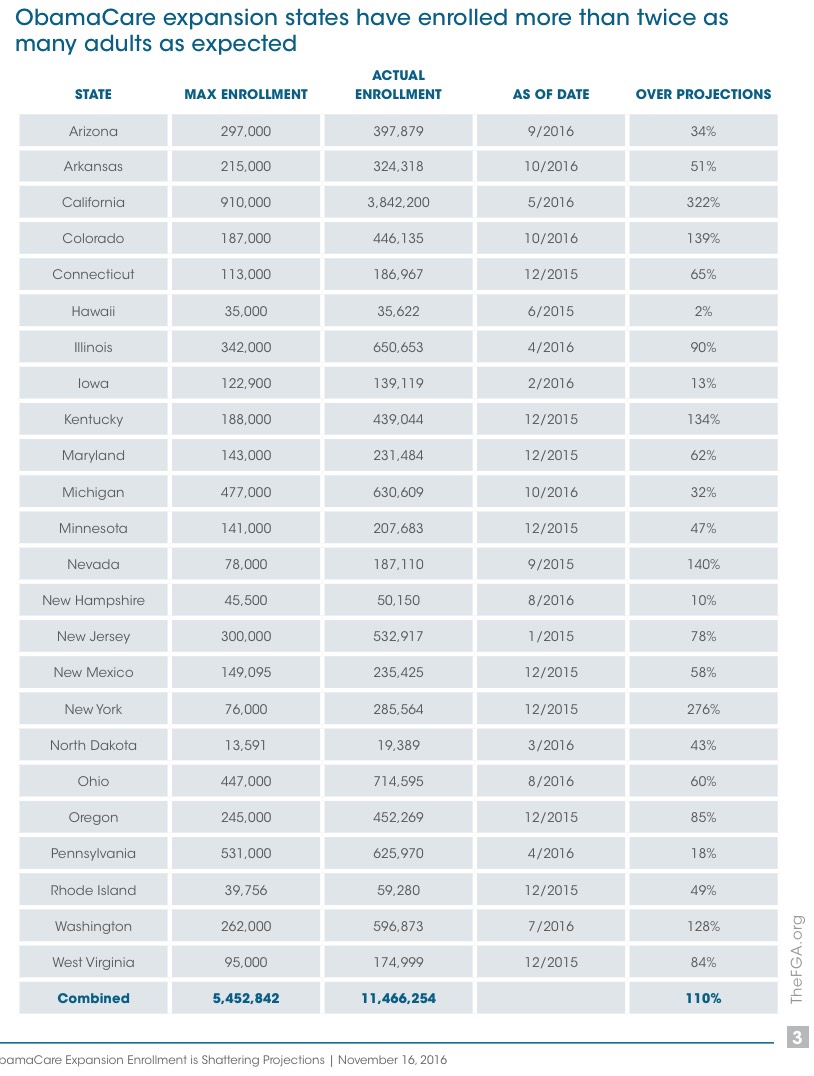 As you can see, there are some important differences between their estimates and mine. On the one hand, they don't list seven expansion states at all (Alaska, Delaware, Indiana, Louisiana, Massachusetts, Montana and Vermont). On the other hand, even without those states, their total still ends up being almost identical to mine (around 11.4 million)...because they actually list several states as having higher ACA Medicaid expansion enrollment numbers than I do (in particular, their number for California is a whopping 892,000 enrollees higher than I had estimated, while they have Ohio and Illinois down as 347,000 and 183,000 higher than I thought respectively). On the flip side, they also have New York's enrollment over 284,000 lower than I thought.

The reasons for the discrepancies vary. For one thing, some of my enrollment data sources are out of date (up to two years in some cases).

Of the missing states, they didn't include AK, IN, LA or MT because they didn't have full year data for them (these states expanded Medicaid far later than the others did).

I, on the other hand, am including everyone currently enrolled in Medicaid via ACA expansion regardless of how long they've been in the system, so my numbers for those states stand:

As I noted, the biggest correction is California; I had CA estimated at around 3.0 million expansion enrollees...but that was from over a year ago. As of the May 2016 Medi-Cal Estimate report from the state Dept. of Health Care Services, ACA expansion enrollment was up to an astonishing 3.84 million people.

What about the other three states missing from the FGA report? Well, for Delaware, Massachusetts and Vermont, their rational is that:

I'm a bit confused about this--these states may have expanded Medicaid earlier than the other states, but it's my understanding that this was still due to ACA provisions. For instance, in Delaware, according to the Washington Post from January 2014:

...Meanwhile, federal officials have identified 5,732 Delawareans as potentially eligible for Medicaid coverage, including under an expanded Medicaid program that Delaware adopted in conjunction with the Affordable Care Act. State officials are still trying to complete final eligibility determinations for those individuals.

Separately, officials said 1,058 other Delawareans have qualified under Delaware’s Medicaid expansion, which boosts the income threshold for eligibility.

This appeared to be roughly 7,000 newly-eligible Medicaid expansion enrollees at the time. Delaware's Medicaid enrollment currently stands at over 13,000 more than it was in September 2013, of which I estimated around 10,000 was via expansion, plus the early expansion crowd. I originally had this pegged at 17,000 total, but it looks like it's closer to 10,000. The FGA doesn't include these folks, presumably because they're using 1/01/14 as their starting date, which is fine.

In Vermont, as of April 2014, according to the Burlington Free Press:

Add these up and you get 60,817 newly-eligible enrollees...as of April 2014. Given the high rate of churn on the Medicaid market and the fact that this number is 2 1/2 years out of date, I whittled my estimate down to just 43,000.

This finally leaves Massachusetts. According to the Better MA Health Connector Briefing from March 2014:

Massachusetts was an utter mess in 2014 for a variety of technical and legal reasons, but as far as I can tell, it looks like they had upwards of 364,000 newly-eligible Medicaid enrollees. (I had this down as around 370K for some reason). again, this data is 2 1/2 years out of date, so presumably there's been a lot of churn in and out of the program, but I'm assuming that a good 300,000 are still enrolled in Medicaid/CHIP due to the ACA expansion provision today.

HOWEVER, I've discussed the FGA report with one of the authors, and he's quite insistant that none of the Massachusetts nor Vermont enrollees were newly eligible for Medicaid due to the Affordable Care Act itself. It sounds like they each passed state-level laws prior to the ACA which expanded Medicaid eligiblity independently, in which case a repeal of the law would presumably not result in those folks being kicked off.

I'm willing to give him the benefit of the doubt on this. While he may oppose the ACA, from his perspective, the higher the Medicaid expansion enrollment numbers are, the more reason there is to repeal the law, so he has no more reason to minimize the numbers than I do, ironically, as a supporter of the law.

Therefore, I'm striking both the MA and VT numbers from the total.

WIth the dust settling on all of the above updates/clarifications, here's what the revised/updated/corrected table looks like. What's amazing is that even with Massachusetts and Vermont crossed off the list, the grand total still ends up coming in nearly 1.0 million higher than I had previously estimated: