OK, HC.gov, we bit the bullet: The Gabas have switched to an HMO

As I understand it, the trend in the individual market has been moving away from wide-network PPOs and towards narrower-network HMOs for some time now...and while the ACA has certainly accelerated this trend, it had already started before the ACA came around.

Anyway, as I've noted before, my own family was among those who received the Scary Cancellation Notices® back in October 2013 letting us know that our pre-ACA Blue Cross Blue Shield of Michigan policy was being terminated for not complying with full ACA requirements (I think it was mostly the lack of mental health coverage, but there might've been other stuff as well).

We managed to work our way through HealthCare.Gov (this was after the worst HC.gov technical problems had been resolved, but while the system was still pretty buggy) and ended up enrolling in the closest equivalent ACA-compliant policy: A BCBSMI Gold PPO plan.

We stuck with that same policy for the next two years as well, but with the unsubsidized premiums for that plan going up a painful 19%, our premium, currently around $1,280/month, would have shot up to $1,523/month. Ouch. (Note: I'm deliberately not detailing how much of a subsidy we qualify for; all premiums listed here are at full price).

Thanks to the new Network Lookup Tool introduced last year, we plugged in each of our doctors, hospitals and prescription drugs and were pleasantly surprised to discover that they're all covered within the network covered by BCBSMI's HMO division (Blue Care Network).

Long story short: We switched from a Gold PPO plan to the Gold HMO equivalent. Same coverage, same deductible, same maximum out-of-pocket cost...but instead of the (unsubsidized) premium increasing by $243/month, it's dropping $77/month. As long as we're careful to stay within our network, we should save around $900 over what we're paying this year...and $3,800 over what we'd be paying if we'd stuck with the PPO.

The lesson, as always, is to make sure to shop around to see what's available each year. 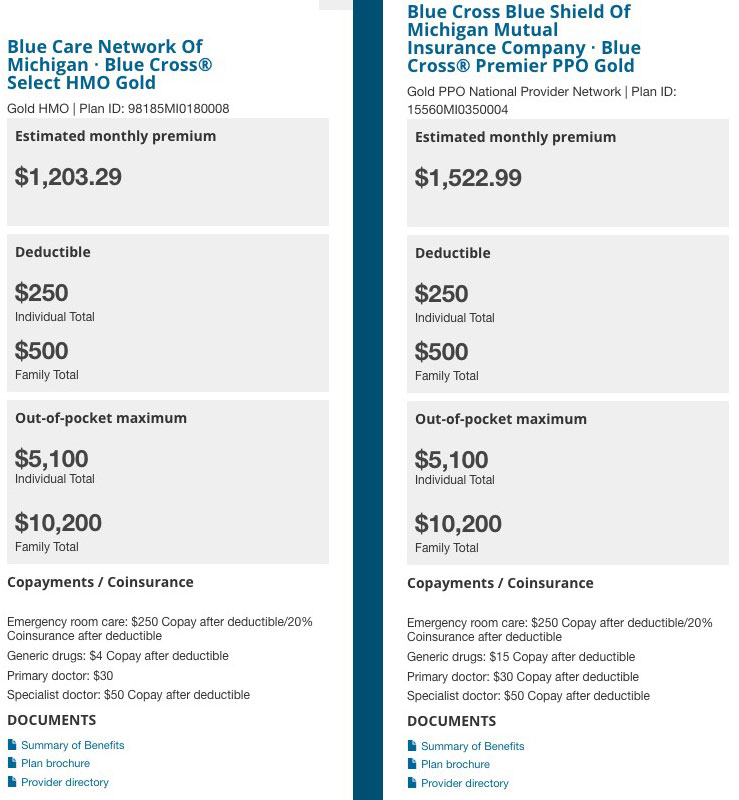