The Price is most definitely not right.

The bad news: Instead, it'll be Georgia Representative Tom Price. None too fond of the Affordable Care Act is he, as you might imagine. Also none too fond of Medicare either. Or of Medicaid, for that matter. Or, while I'm at it, the Children's Health Insurance Program (CHIP).

If President-elect Donald J. Trump wanted a cabinet secretary who could help him dismantle and replace President Obama’s health care law, he could not have found anyone more prepared than Representative Tom Price, who has been studying how to accomplish that goal for more than six years.

Mr. Price, an orthopedic surgeon who represents many of the northern suburbs of Atlanta, speaks with the self-assurance of a doctor about to perform another joint-replacement procedure. He knows the task and will proceed with brisk efficiency.

Mr. Trump has selected Mr. Price, a six-term Republican congressman, to be secretary of health and human services, according to a transition team official.

Just to give you a taste of what Rep. Price has in mind, Edwin Park of the Center on Budget and Policy Priorities has written up a summary of how Medicaid would fare if he gets what he wants:

House Budget Committee Chairman Tom Price’s budget plan proposes to radically restructure Medicaid by converting it to a block grant and cutting federal funding for it steeply, by $913 billion over the next decade. It would also repeal health reform’s Medicaid expansion. The combined Medicaid cut would reach $1.8 trillion over ten years, relative to current law, adding tens of millions of Americans to the ranks of the uninsured and underinsured.

Repealing health reform’s Medicaid expansion means that at least 14 million people would lose their Medicaid coverage or no longer gain coverage in the future. (That’s the number of people who the Congressional Budget Office [CBO] estimates would eventually gain coverage under the Medicaid expansion, though it could reach 17 million if all states adopt the expansion.) In addition, the large and growing cut in federal Medicaid funding from the block grant would almost certainly force states to sharply scale back or eliminate Medicaid coverage for millions of low-income people who have it today. All told, after accounting for the plan’s proposed repeal of health reform’s marketplace subsidies, tens of millions of people would likely become uninsured under Chairman Price’s plan.

It goes on to document the gory details, but the bottom line is this: See the graph below depicting the millions of people who've gained Medicaid coverage since the ACA was passed? Poof. Gone. 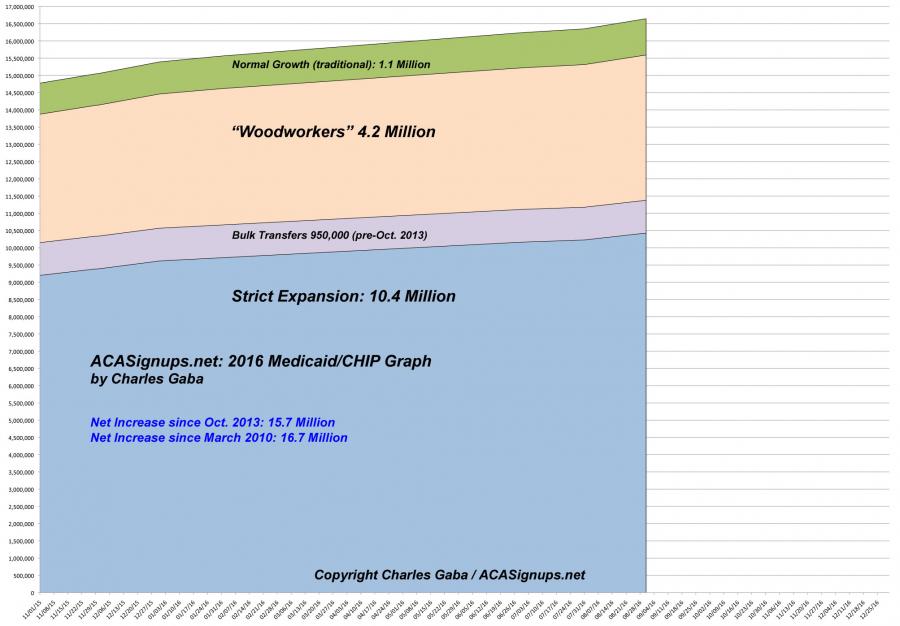 Price will arrive with at HHS with a clear blueprint for what comes next: he is the author of the Empowering Patients First Act, one of the most thorough and detailed proposals to repeal and replace Obamacare. He’s the HHS Secretary you’d pick if you were dead serious about dismantling the law.

...The biggest cut to the poor in Price’s plan is the full repeal of the Medicaid expansion, a program that currently covers millions of low-income Americans, which Price replaces with, well, nothing.

On the other hand, at least, like my conservative-but-intellectually-honest friend Pradheep Shanker pointed out:

Great thing re: @RepTomPrice is, unlike many, he understands there are cost/benefits to every decision. Critical to piecing together policy.

In 2012, Price said it's a "terrible idea" to force insurers to cover preexisting conditions. Why? Hard to do w/o a mandate-esque mechanism.

In other words, while he draws the wrong conclusion about pre-existing conditions, at least he recognizes why it's a difficult choice to make.

To use the 3-legged stool as an example: While Trump and numerous other Republicans either honestly don't understand why you can't yank away two of the legs and not have the stool collapse (or do understand it but are lying through their teeth), Price at least recognizes the importance of having all three legs. He just happens to think it's a swell idea if only young, healthy people can afford to sit on the stool:

This means that that Bill Gates would qualify for the largest tax credit simply because he is 61-years-old. Under the Empowering Patients bill, Gates’ net worth of $83 billion — presumably enough to purchase health coverage — would do nothing to disqualify him. Under Obamacare, he gets no help.

Conversely, a 23-year-old with little income and health problems gets minimal help under Price’s plan — despite the fact that they need support much more than Gates does.

In that sense, I suppose, he may at least be qualified for the job, even if the policies he supports are awful from a "human decency" POV.

After all, it could've been worse; he could've appointed Ted Nugent or Scott Baio.