As I noted this morning, I'm expecting roughly 87,000 people to either enroll or renew their healthcare policies nationally via the assorted ACA exchanges (either HealthCare.Gov or one of the state-based exchange sites like Covered California, New York State of Health and so on) in the first 24 hours of the 2017 Open Enrollment period...which is to say, by midnight tonight.

I mention this because just moments ago in my post about Minnesota's exchange website and phone lines being attacked, I closed by light-heartedly noting that a straight national extrapolation of MNsure's enrollment figures from their first 2 hours of operation would suggest over 180,000 people enrolling nationally in just a few hours. I then brushed off that possibility as being extremely unlikely; my official projection has total 2017 exchange enrollments hitting around 785,000 the first week.

Well, assuming that this is all due to real people attempting to sign up, I might need to rethink that projection after all. I just visited HealthCare.Gov, and while the home page loaded quickly, clicking the "Log In" page brought up the Waiting Room screen: 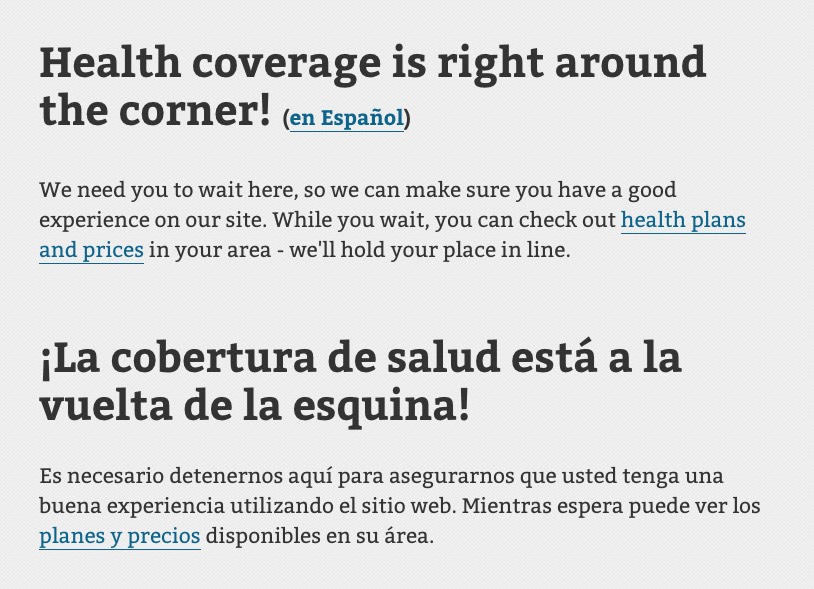 Now, considering that HC.gov is operating literally 100,000x better than it was the day it launched 3 years earlier, with massive bandwidth/server load capacity increases and so forth, this really surprised me. Last year I seem to recall the "waiting room" page only loading a few times here and there, and almost always on deadline days, not at launch. I was honestly expecting today's server load to be middling by recent standards...decent traffic but nothing earth-shattering.

I was therefore surprised to see this comment from an ACA Signups visitor:

I am trying but...capacity reached message for a couple of hours so will have to wait a while...it's ok..if it's avg 78/min I get it...At HC.gov. I am in Virginia. Took about 1.5 hrs in the queue before it gave me the login screen and let me proceed. It was ok though b/c I left the screen open and it finally dished up the login page. I was probably trying at lunchtime heavy traffic time? I did get in, updated my app and I can enroll whenever want now. I did not encounter any time getting kicked off, delayed page loads or other problems I had last year (that was my first year). I guess they did a better job of managing the traffic/capacity than last year. I am happier waiting in a queue for smooth operation than letting me in and kicking me out all the time...that happened to me a lot last year. I am sure they will be looking at the traffic numbers closely.

This, combined with the MNsure news, made me a bit paranoid...is HC.gov facing similar shenanigans to MNsure? If so, does that suggest something bigger going on?

STATEMENT:
In the first six hours of Open Enrollment today, we saw a 50 percent increase in the number of applications submitted versus the first six hours of Open Enrollment last year. As has been the case on previous high-volume days, customers can visit HealthCare.govand view plans but some are periodically experiencing a waiting room before they login. Throughout this Open Enrollment period, as we have in years past, we’ll continuously work to ensure consumers visiting HealthCare.gov have a quick and easy experience signing up for quality, affordable coverage.

Now, it's important to keep in mind a couple of important points:

It's also worth remembering that the 74,000 or so Kentucky residents currently enrolled in policies via the now-defunct kynect exchange will have to start all over with a brand-new account/application at HC.gov this year, so that could also be a factor.

In any event, the main points here are 1) the massive traffic at HC.gov appears to be legitimate, and 2) given how much HHS has beefed up the server capacity, that's great news out of the gate. This could simply be front-loading of course; for all we know, actual enrollments could spike early but taper off later on...but it's a positive sign to start things out with.

UPDATE: Ah, here it is; I was able to dig up the first-day application numbers from the past two years for comparison...sort of:

Hmmm...OK, that's a bit tricky to suss out, partly because of the 2-day figure last year, partly because the first day of Open Enrollment fell on a weekend the previous two years but on a Tuesday this year. Traffic is usually higher on weekdays than weekends, so that could potentially account for the entire increase...but perhaps not.

Start of Open Enrollment: Apps submitted thru @HealthCareGov ↑ 50% in the first 6 hrs compared to last year → 60K+ so far! #GetCovered

OK, so that's applications submitted, not actual QHP selections, which is fine but an important distinction. So, more than 60,000 in the first 6 hours, which ran from 8am - 2pm. I'd imagine that should hit perhaps 180,000 submitted applications by midnight. A similar pace tomorrow (also a weekday) would bring it in at around 350,000 for the first 2 days, or 40% higher than the first 2 days last year.