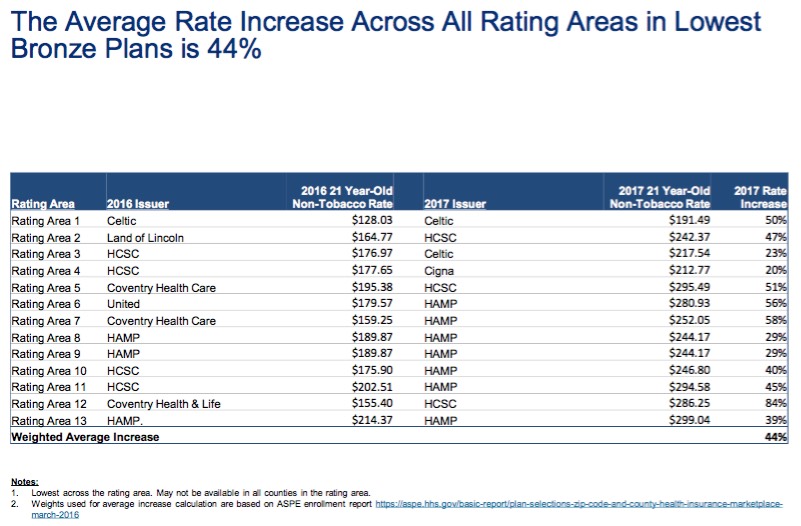 However, this is far more useful than you might thing for a couple of reasons. First, less than 0.5% of all of Illinois' 2016 enrollees chose Catastrophic plans this year, and no one chose a Platinum plan (I'm not sure if this is because there weren't any available or if it's just that no one was interested, but whatever). Furthermore, I believe most people choose the "benchmark" plan (2nd cheapest Silver) in most states, so the odds are good that those 4 options (lowest Bronze, lowest/2nd-lowest Silver and lowest Gold) cover the vast majority of the Illinois market. Unfortunately, off-exchange numbers aren't available here, but I have to go with the data I have on hand.

WIth that in mind, I can consult the March 31st Effectuated Exchange Enrollment report to figure out the ratio of the three metal levels. 29% chose Bronze, 61% chose Silver and 10% chose Gold plans. If I split the Silver plans between the lowest & 2nd lowest-price plans, here's what it looks like:

It actually doesn't much matter what the Silver split is, since the average approved rate hike is almost the same anyway (45% and 43%). Bronze plans are 44%, and Gold only makes up 10% of the total, so the overall approved rate hikes end up right around 45.1% regardless.

As you can see, this may technically be lower than the 46% requested, but it's hardly worth crowing about. As far as I can tell, all of the carrier requests were approved pretty much as is.