How does Aetna's announcement impact avg. rate hikes for 2017?

Yesterday, Aetna delivered a bombshell (well, one which they had forecast a week or so ago, but still) when they announced that not only are they not expanding into additional markets (as they were talking about doing just 3 months earlier), they've actually decided to completely drop out of 11 states:

Health insurer Aetna Inc. will stop selling individual Obamacare plans next year in 11 of the 15 states where it had been participating in the program, joining other major insurers who’ve pulled out of the government-run markets in the face of mounting losses.

Here's the full list of states Aetna is pulling up stakes in:

Here's the 4 states where Aetna will still be selling exchange-based policies:

Several people (including myself) have already noted that this announcement means that I'm going to have to go back into my 2017 Rate Change spreadsheet and recalculate the estimates for 11 states in light of this development. Removing Aetna from the calculation in those states could change the weighted averages dramatically...although it could actually lower the average rate increases in some cases, assuming Aetna's request is higher than the current average.

HOWEVER, this is complicated by one other important part of their announcement:

According to Zach Tracer of Bloomberg News, Aetna has around 838,000 exchange enrollees across all 15 states (I believe this includes their Coventry subsidiary in some states). As far as I can figure, here's how that breaks out by state:

If you add these up, they total around 553,000 people, plus unknown numbers in Missouri and Nebraska, and a cautionary note re. Florida.

I'm glad to hear that Aetna is staying in Nebraska...but it's a surprise to me, because according to my records (as well as RateReview.HealthCare.Gov), Aetna isn't participating in the individual market in Nebraska in the first place! 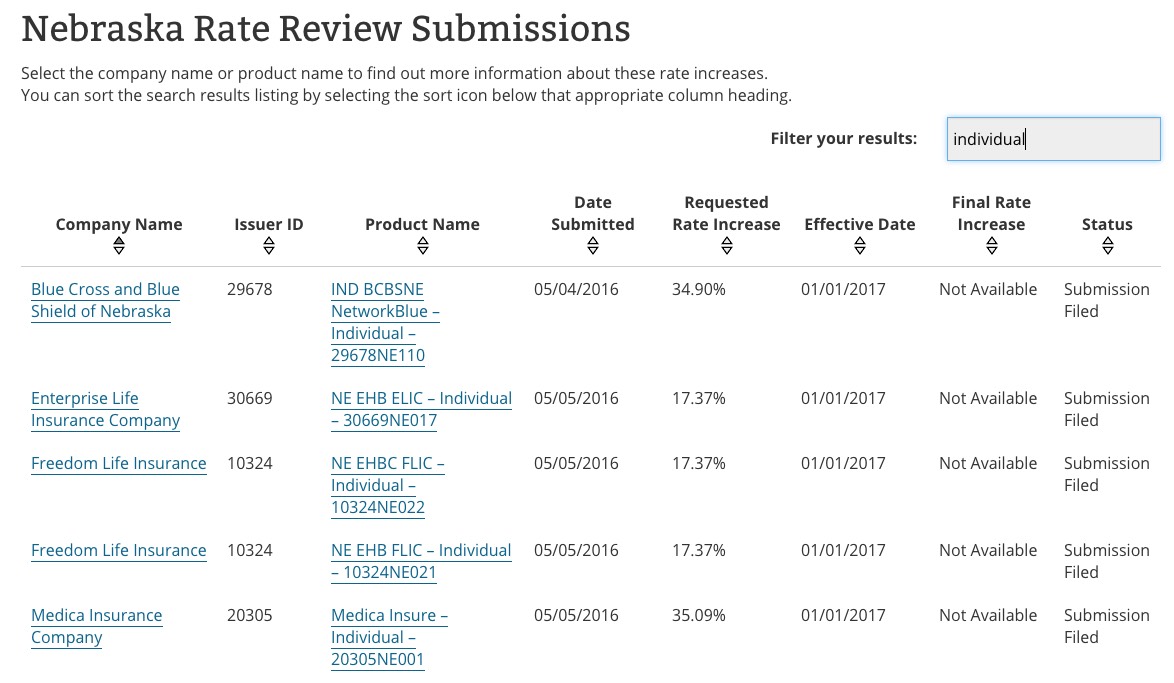 For Florida, (thanks to Ken Kelly for the tip), I don't know how many exchange enrollees they currently have, but I do know that as of the end of 2014 Aetna had around 305,000 individual policy enrollees total, via this testimony before the FL Office of Insurance Regulation: 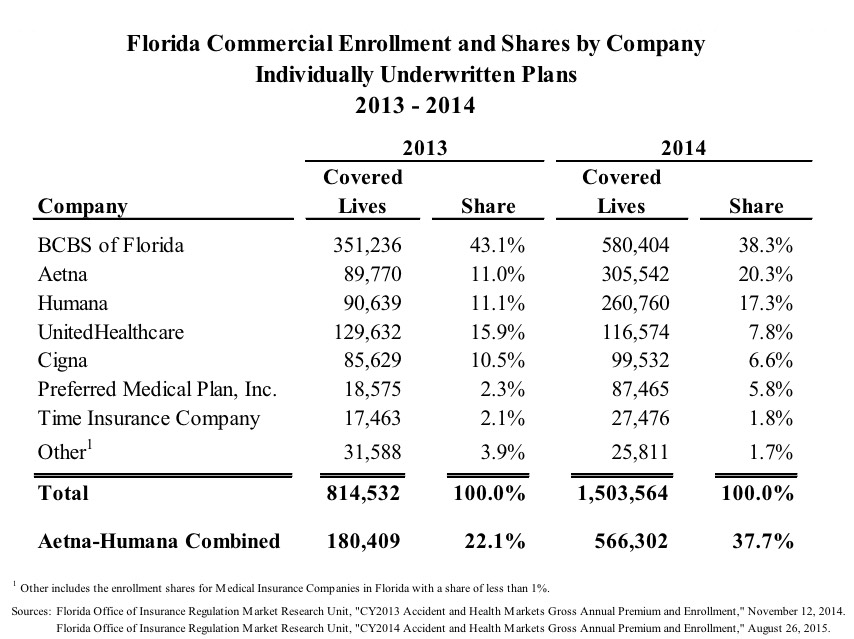 Unfortunately, not only is the 305K figure two years out of date, it also mixes together on and off-exchange enrollees, along with grandfathered/transitional plans, which aren't part of the ACA policy risk pool anyway. In fact, according to this table from the FL OIR, in 2014, only 57% of Florida's total individual market was exchange-based.

It looks like that's a total of a mere 32,000 people enrolled in exchange-based policies and none enrolled in off-exchange.

Why is there such a huge discrepancy? Well, it's possible that Aetna lost massive market share to competitors in 2015 and 2016. It's also possible that the 32K listed above doesn't include a much larger number of Aetna enrollees whose policies were going to be dropped entirely even before yesterday's announcement, and therefore weren't even included in the rate filings. Unfortunately, I have no idea which of these is the case...but in the meantime, the only number I have to go by is 31,944.

As for Missouri, I don't know how many people are enrolled under the Aetna brand, and there's a bunch of listings for Coventry, the sum total enrollment of which adds up to way more people than is even possible for the state, so I'm not sure what to do with them.

OK, with those caveats aside, you would think I could simply yank Aetna out of the 11 states in question and see what happens with the remaining carriers, right?

Well, yes, except for that line above:

This is obviously a major issue for a good 85% or so of those enrollees. Someone currently paying $100/month for a $500/month policy via the exchange isn't in a position to suddenly have to start paying the full $500...but theoretically they could do so, which makes it difficult to simply remove Aetna/Coventry from the spreadsheet.

WITH THAT IN MIND, here's what the requested statewide averages look like if you simply remove Aetna/Coventry completely from those 11 states:

Going back to Florida: As of March 2015, Florida's total ACA-compliant individual market was 1.65 million people, including 1.28 million exchange-based and 375K off-exchange. As of March 2016, Florida had over 1.53 million people enrolled in effectuated plans on-exchange alone. Assuming the off-exchange number is still at least 375K this year, that means at least 1.9 million Floridians are currently enrolled in ACA-compliant policies.

If only 32,000 of these people really are enrolled via Aetna (which still sounds suspiciously low to me), the statewide impact of their dropping out should be nominal. According to the RR.HC.gov database, Aetna's average rate increase requests prior to yesterday's announcement ranged from 21-29%, so Florida's 17.7% average should drop slightly by removing them, but not much...perhaps a tenth of a point or so.

So...it looks like the statewide averages would increase in Georgia, Illinois, Missouri, Pennsylvania and Texas, decrease in Arizona, North Carolina and South Carolina, and stay almost the same in Florida and Kentucky.

However, there are way too many caveats and unknowns above for me to plug these revised numbers into the full state-by-state breakout spreadsheets, so I'm just gonna sit tight for now.