*("Approved" is preliminary; see below)

Oregon was the second state to publicly announce the rate changes their carriers are requesting for the 2017 individual and small group markets. The overall weighted average request on the individual market side came in at a requested 27.5% increase, while the small group market requests had an average increase of just 1% overall (I didn't weight the small group enrollment numbers at the time, but have done so below).

Yesterday (thanks to commenter farmbellpsu for the tip), the Oregon Dept. of Insurance announced preliminary approved rates for 2017:

After a brutal two years in which they lost a collective $253.3 million, Oregon's health insurers are again seeking double-digit price hikes in 2017.

The dawning of the Affordable Care Act era has been tough on health insurers and consumers. No longer able to deny coverage to customers with pre-existing conditions, many of the state's largest carriers have lost millions of dollars and have passed on two successive years of big rate hikes to their customers.

So far, the evidence in Oregon suggests citizens are willing to pay the price. The number of people buying insurance through the individual market continues to rise and the number of uninsured Oregonians continues to decline, Cali said.

...The state is scheduled to make its final decision on 2017 rates by July 1. In the meantime, regulators will hold public hearings and is accepting comments from the public. The state is asking Oregonians for input at a series of public hearings.

In other words, the rate increases in the "Approved" column below might change slightly yet again when the final numbers are posted in 2 weeks.

Having said that, here's how the requested vs. (tentatively) approved numbers look in Oregon. I've color-coded all changes...green for rates which were lowered by state regulators, pink for rates which were actually increased more than the carrier requested. Fortunately, there was only one of those, and it's for a carrier which has only 900 people enrolled in their policies in the first place. 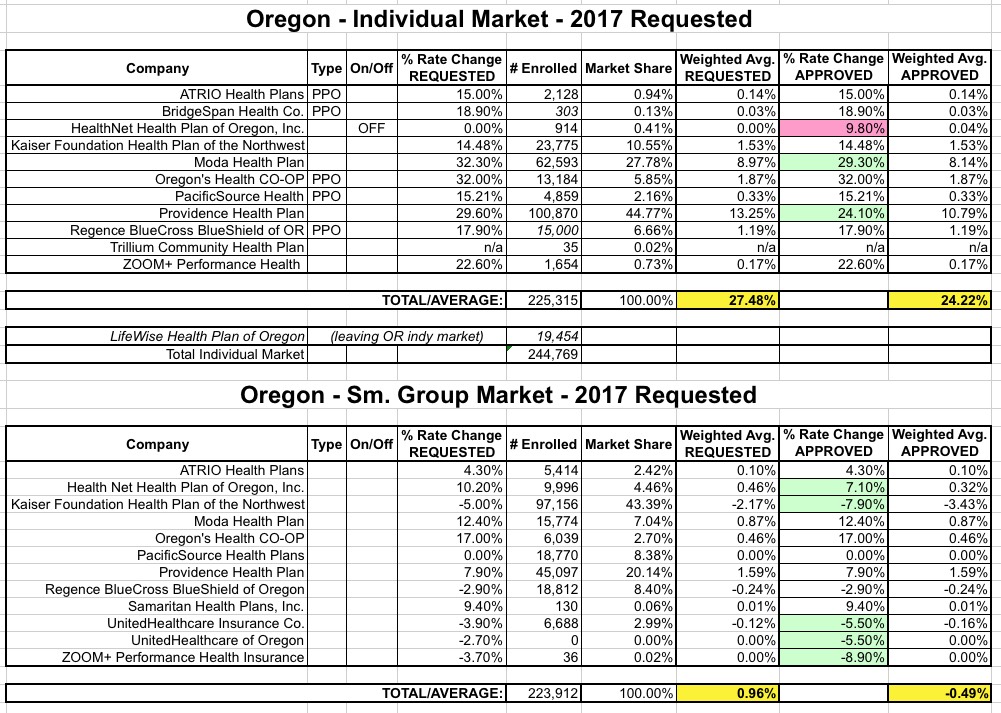 On the individual market, HealthNet didn't ask to have their rates change at all, but regulators are requiring them to bump up their rates by nearly 10%. While unusual, this is actually not unheard of. Remember that the regulators are supposed to prevent price gouging, but part of their job is also to ensure that consumers don't get screwed over by their carrier not having enough liquidity to actually pay out claims, or by flat-out going belly up and having to pull out of the market entirely. In other words, part of their job is to help save carriers from themselves.

As I noted above, however, HealthNet only has 914 people enrolled in individual plans state-wide anyway, which is far outweighed by the reductions in rate hikes for Moda (32.3% requested, 29.3% approved) and Providence (29.6% requested, 24.1% approved). The overall result is a modest but still welcome overall reduction from 27.5% to 24.2% on the individual market.

As for the small group market (which, it should be noted, is almost exactly the same size as the indy market), the overall weighted average is actually a 0.5% reduction of rates state-wide year over year! This is excellent news in a year where double-digit rate hikes are likely to be the norm.

UPDATE 7/8/16: Welp. Oregon's Health Co-Op has become the latest of the ACA-created cooperatives to shut down, which means I have to scratch them off the list. Doing so gives the following revised rate changes...slightly lower for both the individual and small group markets, since the Co-Op had been requesting hikes higher than the prior average:

UPDATE 8/8/16: OK, the final approved rates (for real!) are the same as the "semi-final" approvals with one exception: ATRIO plans were bumped up from 15% to 20.8%. However, ATRIO has such a tiny market share that this only makes a nominal change to the statewide average, nudging it up to 23.8%...still 3.4 points lower than the requests: 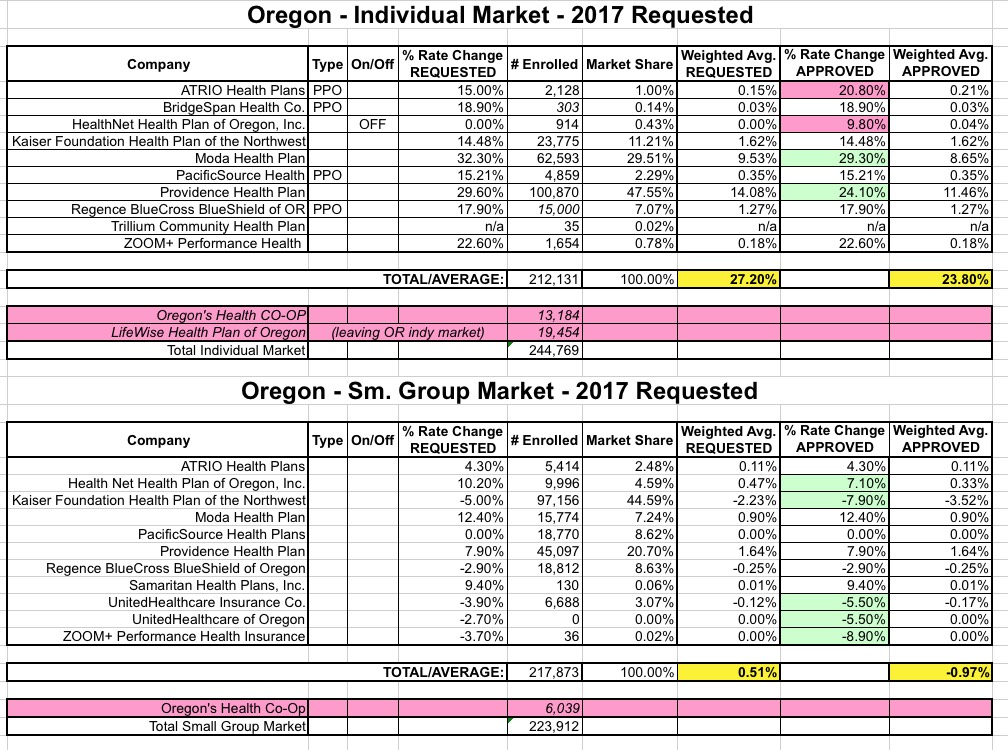 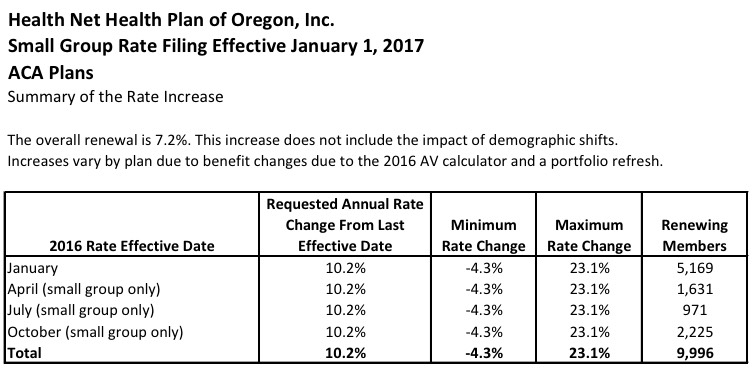 One other little tidbit: In ATRIO's case, at least, out of 5,414 small group enrollees state-wide, about 540 are via the ACA's SHOP exchange, for whatever that's worth: