OK, let's pause it there for a moment. If you look at the rate tables below, the claim of an overall 28% reduction in rate hikes may seem confusing: The individual plan hikes were reduced by either 7.8% or 15% depending on whether you're basing it on the carrier's initial requests (18.0%) or their later, revised requests (19.3%). The small group plan hikes were reduced by either 30.8% or 32.5%. Obviously the only way to get a 28% reduction is to combine the two markets. Nothing wrong with this, of course, but it's important to keep these things straight.

In fact, even if you stick with the individual market, the irony is that neither of the "requested" averages match up with the original request averages posted by NY DIFS back in May; at the time, they were averaging 17.3%. Compared to this, the individual rate hikes as approved (16.6%) are only 4% lower than originally requested. Even so, a reduction is a reduction (even if it's actually not a true reduction...it's a reduction in the amount of the increase...)

“DFS carefully examined the rates requested by health insurers to reduce excessive health insurance premium increases in the face of rising national healthcare and pharmaceutical costs,” said DFS Superintendent Vullo. “While premiums are increasing nationally, New York’s rates are comparable or lower than rates requested and approved in other states. More than 50 percent of consumers buying plans through the NY State of Health will receive a tax credit offsetting the increases in premiums, and for some the credit will result in lower actual premiums. DFS will continue to protect consumers and ensure access to healthcare, while maintaining a vibrant and competitive New York insurance market.”

“Consumers should shop around for the best value,” said Donna Frescatore, Executive Director of NY State of Health. “The Marketplace offers one-stop shopping for individuals and small businesses, and it’s the only place you can receive federal financial assistance which greatly helps make coverage more affordable for many New Yorkers.”

Reflecting a nationwide trend, the main drivers of premium rate increases are underlying medical costs. For the 2017 rates announced today, DFS estimated that insurers’ average claims trend is approximately 7 percent for the individual market and 8.5 percent for the small group market. Inpatient hospital and drug costs account for the largest share of medical expenses (more than 40 percent), followed by ambulatory surgery (12 percent) and diagnostic testing/lab/x-ray (11 percent). The largest growth in spending occurred in drugs, with very large increases attributable to Hepatitis C drugs (54 percent unit cost increase and 14 percent more use of the drug).

Under New York Law, insurers must spend a specific minimum percentage of premium dollars on health care costs. The balance goes to paying for insurer administrative costs and profit. For individual and small group policies, that minimum requirement, called the Minimum Loss Ratio, is 82 percent. The 2017 rates approved by DFS estimate that insurers will spend even higher percentages on health care costs – an 85.5 percent overall average for small group plans and an 87.2 percent overall average for individual plans.

There's some mention of two of the "3 R's" here as being to blame for the higher-than-normal increase. Interestingly, the third R (risk corridors) is not mentioned, since presumably everyone would rather sort of sweep that mess under the rug at this point.

Like other states throughout the nation, the 2017 rate of increase for individuals in New York is higher than in past years partly due to the termination of the federal reinsurance program which accounts for 5.5 percent of the rate increase.

Rates are also rising nationally due to more comprehensive claims data. Until this year, insurers have had little claims data on the hundreds of thousands of newly insured members who entered the market in 2014. Insurers now have more claims data to adjust premiums, which demonstrate that some increases are justified.

They also provide details on the small group market, which I actually only write about sporadically:

More than one million New Yorkers are enrolled in small group plans. Insurers requested an average rate increase of 12.3 percent in the small group market. DFS cut the requested rate increases by 32 percent to 8.3 percent in 2017, saving small businesses $251 million. A number of small businesses will also be eligible for tax credits that may lower those premium costs even further.

Over 350,000 New Yorkers are enrolled in an individual plan. DFS reduced insurers’ total weighted average increase requested for individuals from 19.3 percent to 16.6 percent. Rates for individuals are more than 55 percent lower than prior to the establishment of the NY State of Health in 2014, adjusting for inflation but not counting federal financial assistance that is available to many consumers purchasing insurance. Financial assistance through federal tax credits for those who qualify will also increase in 2017. Households between 200 percent of the federal poverty level, which is the highest level to qualify for the Essential Plan, and 400 percent of the federal poverty level ($47,520 for individuals and $97,200 for a family of four) qualify for federal tax credits, which will reduce premium costs. In 2016, more than 50 percent of individuals who enrolled in a Qualified Health Plan on the Marketplace received financial assistance, which significantly mitigated the impact of premium increases for these individuals. For example, the 2017 overall average increase for individuals who purchase silver level plans, the most popular choice for individuals purchasing on the Marketplace, is reduced to about 9 percent.

Note: 271,000 people enrolled in QHPs via the NY exchange this year, of which 224,000 were still enrolled as of the end of March. However, an additional 380,000 are enrolled in the "essential plan" (BHP), which does not appear to be included among the 350,000 figure above (if they were, then the total number of New Yorkers enrolled in "individual plans" would be well above 600K). The fact that BHP enrollees are specifically noted as not being impacted by the rate hikes below confirms this.

That means that there's roughly 126,000 NY residents enrolled in off-exchange individual policies...and since NY didn't permit transitional plans, the odds are that all but a few thousand of these are ACA-compliant. 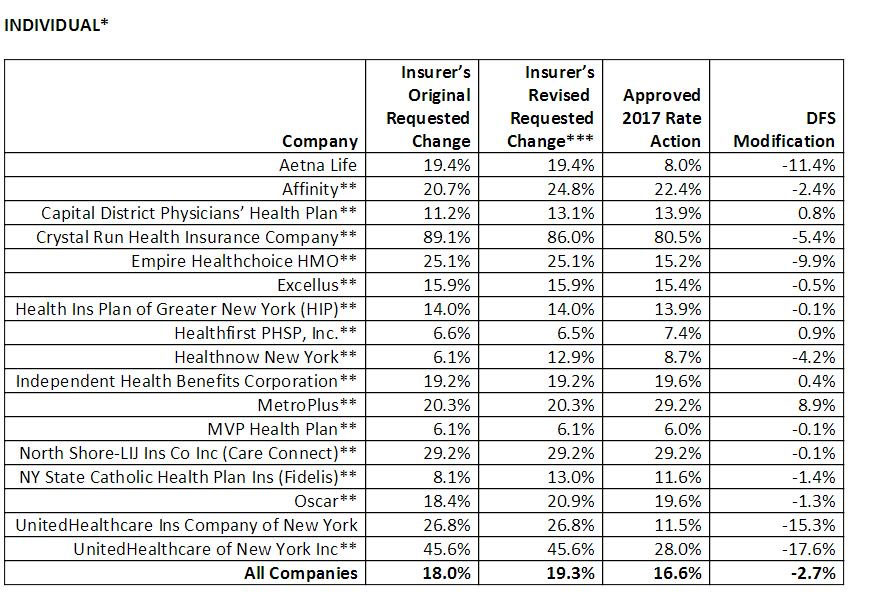 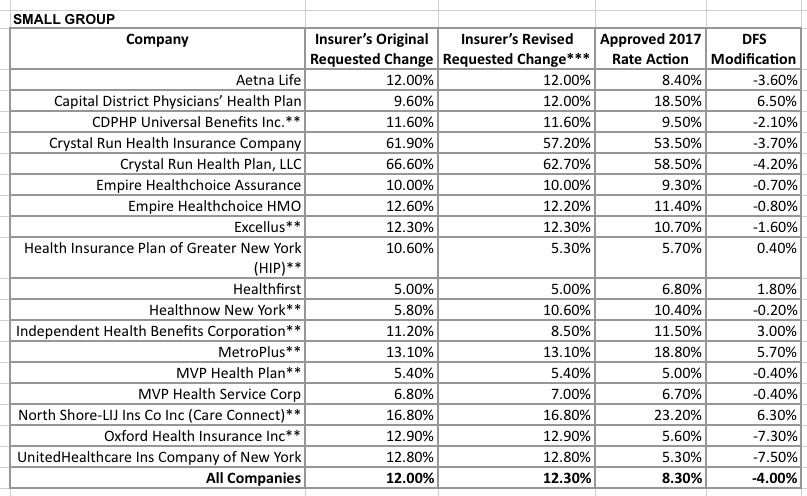