IMPORTANT: This is really just a placeholder for Georgia's 2017 average rate hike requests, because it's extremely spotty and partial so far. I'll update it once I'm able to actually track down the bulk of Georgia's individual market enrollment and rate hike request numbers.

Thanks to Don Kramer for finding an article in Georgia Health News from back in May, in which healthcare reporter Andy Miller posts some of the 2017 requested GA rate hikes from some of the carriers in the state...but it remains frustratingly incomplete, and he doesn't provide any links to the actual filings themselves. I can't find anything listed on the Georgia Insurance Dept. website, GA doesn't appear to use the SERFF database, and GA isn't posted at the HC.gov Rate Review database yet either, so I'm stumped as to how Miller got ahold of these numbers. I've asked him about this, and will update this entry if/when he responds (or if/when any of the above sources posts Georgia's data anyway).

Having said that, here's the relevant numbers from the article:

Blue Cross and Blue Shield of Georgia, whose proposed increases average from 9.1 percent to 14.8 percent, will offer health plans statewide. Aetna, through its Coventry unit, will have plans across almost all of the state.

But overall, people seeking individual or family coverage will have just eight insurers to choose from in Georgia rather than nine this year, after the exit of UnitedHealthcare.

...Another insurer, Humana, will reduce its offerings, limiting its plans to just the Atlanta, Columbus, Macon and Savannah areas. Humana’s average increase is a whopping 65.2 percent, the highest among Georgia insurers, rate filings show.

Harken Health, a United subsidiary, is seeking the next highest increase, at an average of 44 percent.

...Areas of South Georgia – the Albany and Valdosta regions — will have the most expensive premiums in Georgia, according to the rate filings. Custer said that those markets have health systems with virtual monopolies, but he also pointed out that those hospitals “will argue that they have sicker patients’’ in their regions.

Cindy Zeldin, executive director of Georgians for a Healthy Future, said Monday that proposed rate increases “are the health insurance companies’ opening bid and serve as important information for regulators, consumer advocates, and other stakeholders, but they aren’t a good predictor of what consumers will actually pay for health insurance next year.’’

The consumer group said it “encourages state regulators to scrutinize the Georgia proposed rates carefully to ensure they are justified and to request adjustments if appropriate. ‘’

...Allen said the federal deadline for Georgia to submit rate approvals or denials to the U.S. Department of Health and Human Services is Aug. 23. Between now and shortly before that date, companies can adjust their submitted rates, he said.

...A total of 587,845 Georgians signed up for coverage in the insurance exchange for this year, a 9 percent increase over the 2015 total.

Not much to go on. Last year, Blue Cross had roughly a 38% market share, with Humana at around 21% and UnitedHealthcare (the parent company, not Harken) coming in at just 5%. If, hypothetically, those ratios are about the same this year, that would mean something like:

...or around 20.4% on average, plus whatever the average is of the other 5 carriers making up the remaining 36% of the market. HOWEVER, that's all pure speculation, so I'm not even gonna bother plugging that into the spreadsheet for now.

IMPORTANT: Please note that the Cigna filing appears to only be for off-exchange policies. Unless I'm missing something, it appears that Cigna is dropping off of the ACA exchange in 2017. 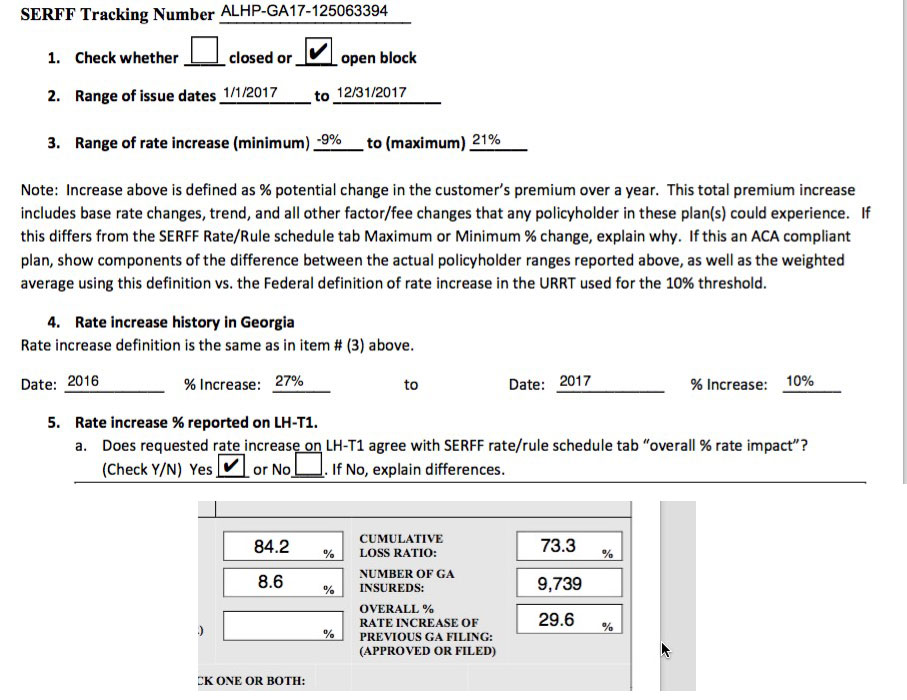