Pretty damning, even if you ignore the "even" descriptor regarding the author's opinion of the ACA, right?

Well, that descriptor makes a little more sense when you read the byline...

If that name sounds familiar, there's a very good reason:

The New Republic says I'm "Obamacare's Single Most Relentless Antagonist." The Week says I'm “ObamaCare’s fiercest critic.” Vox says I'm "the man who could bring down ObamaCare." The Washington Post calls me “an influential health-care wonk at the libertarian Cato Institute,” where I am the director of health policy studies. I am the co-editor of Replacing Obamacare"...I was a domestic policy analyst for the U.S. Senate Republican Policy Committee, advising the Senate leadership on health, education, labor, welfare, and the Second Amendment.

Got all that? Oh, yeah...one more thing: 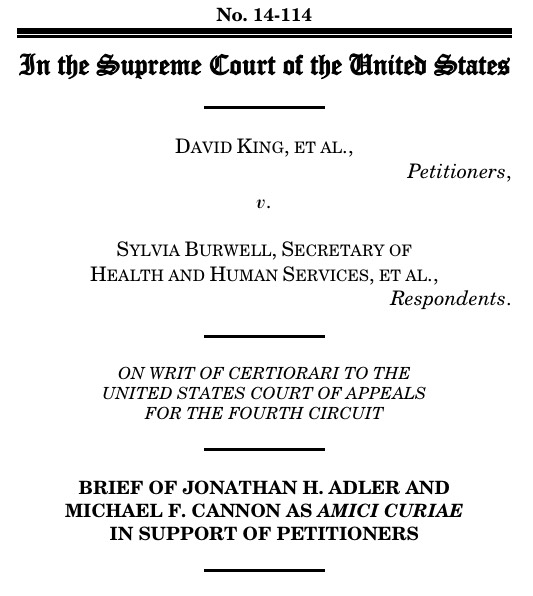 Yes, that's right. Michael Cannon, who despises the Affordable Care Act with the fury of a thousand suns, the co-conspirator behind the infamous King v. Burwell court case which went all the way to the Supreme Court and nearly dealt a body blow to the law based on a single sloppily worded sentence...that Michael Cannon...has written a new piece over at Forbes which tears apart the Republican "alternative" to the ACA as being essentially the same law with a different name and some window dressing.

A sampling (and it's important to stress that he's approaching all of these provisions from a very, very different mindset than those who support the ACA):

After six-plus years, congressional Republicans have finally offered an ObamaCare-replacement plan. They should have taken longer.

...Where it matters most, however, House Republicans would repeal ObamaCare only to replace it with slightly modified versions of that law’s worst provisions.

1. ObamaCare offers refundable health-insurance tax credits...But Republicans would offer them to everyone, regardless of income or where they purchase coverage.

2. These expanded tax credits...they do something that Democrats’ subsidies don’t: give a bipartisan imprimatur to ObamaCare’s redistribution of income.

3. As I have tried to warn Republicans before, these and all health-insurance tax credits are indistinguishable from an individual mandate.

4. Health-insurance tax credits also give the federal government as much control over the content of your health plan as ObamaCare’s individual and employer mandates do.

...Moreover, this plan is downright dishonest.

And so on. Of course, Cannon does defend some of the provisions of the GOP's plan...although these tend to be items which make any progressive reader aghast (such as raising the Medicare age, converting Medicaid into block grants) or which would be unlikely to have that much impact one way or another anyway (such as the old "buying across state lines" chestnut, which the ACA already allows for and which most carriers don't seem particularly interested in anyway). Oddly, I didn't see any mention of his opinion one way or the other of going back to the disastrous High Risk Pools from the pre-ACA days, which is one of the things the law was specifically designed to do away with.

Overall, however, when Michael Cannon, who hates the ACA more than anyone else in the country, states flat-out that your plan is potentially even worse (from his POV) than the ACA, that should tell you something.