Back in April, I attempted to figure out just how many people are still enrolled in Grandathered and/or Transitional (or "Grandmothered") policies on the individual market. My conclusion, based on some very rough estimates, was that the figure is likely somewhere between 800K - 1.4 million Grandfathered enrollees and somewhere between 1.1 - 1.5 million Transitional enrollees.

Today, I decided to try tackling the Transitional side of this problem by taking the direct approach: I visited RateReview.Healthcare.Gov.

Most of my time spent here over the past few weeks has been spent on the "Search ACA-Compliant Products" side, trying to lock down the requested 2017 rate hikes for every carrier offering individual policies in every state. However, there's a second big button available as well: "Search Transitional Products":

Transitional & Student Products - These products include plans that began providing coverage before 2014. These plans are not typically compliant with all ACA regulation and protections but are still subject to rate review requirements.

It occurred to me that I've never actually poked around that side of the RR database...but when I did, I actually found it faster and easier to use than the ACA-compliant side, for a couple of reasons. First, there's far fewer types of plans listed, which makes sense since these are being gradually phased out and are only available in about 2/3 of the states anyway. More importantly, however, every filing displays the number of current covered lives right up front. No need to hunt down for obscure SERFF filings or to dig through pages of text for the correct number; it's right there in the exact same position for every filing! For instance, here's one for Golden Rule here in Michigan:

This is also easier to work with because I'm not really that concerned with the actual rate hikes here as I am the raw number of people currently enrolled. In fact, I only found two catches: First, as you can see in the example above, many of the carriers only have listings for policies starting in 2015, not 2016, which means that they're out of date by now. Since no one can newly enroll in Transitional plans, while some of those who were enrolled in them at the time have since dropped out for one reason or another, that means that the 37,530 figure is, by definition, going to be smaller today than it was a y ear and a half ago, not larger.

Secondly, there were 5 states which have the filings listed, but come up blank when you try to actually click on any of them within that state. I don't know if this is just a technical glitch in the database or what, but it means I don't have any hard data for Alabama, Missouri, Oklahoma, Texas or Wyoming. The good news is that I've figured out a way to estimate a ballpark number for each of these.

It's important to note that while my analysis does include student plans (which are mostly nominal numbers, usually less than 1,000 per filing), it doesn't include small group enrollees. It's also important to remember that about 1/3 of the states didn't allow Transitional plans at all, and another half-dozen or so may have allowed them to be offered, but either none of the carriers bothered doing so or they simply no longer have any enrollees left regardless. There are also cases like California, which didn't allow individual transitional plans beyond 2013, but which seems to have a small number of student plans in place...or at least they did last year.

IMPORTANT: This is about transitional enrollees only, NOT Grandfathered enrollees.

OK, with all that in mind, here's what I've come up with. I'll explain how I estimated the 5 missing states below the table: 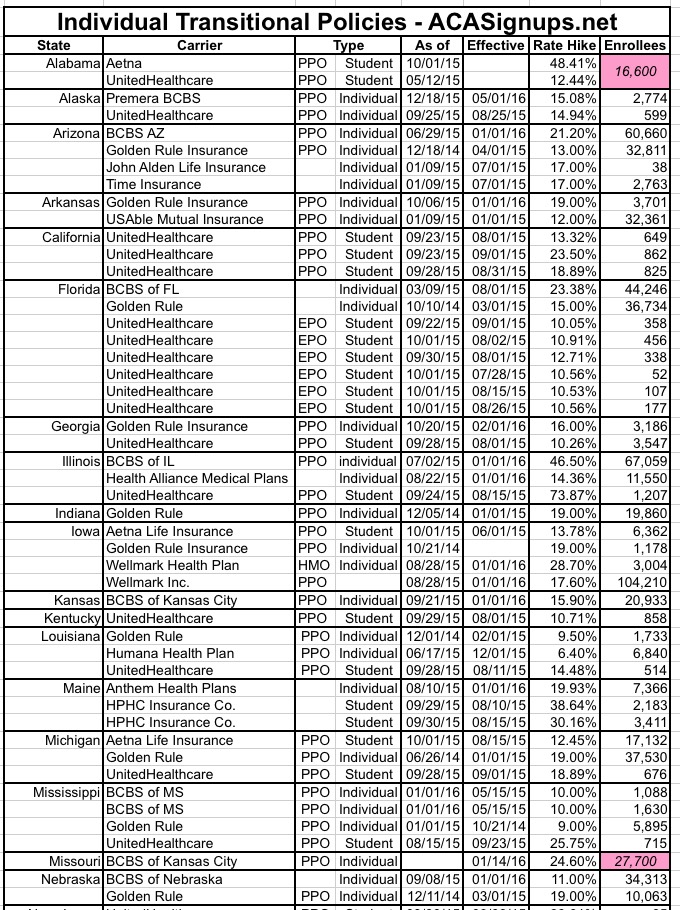 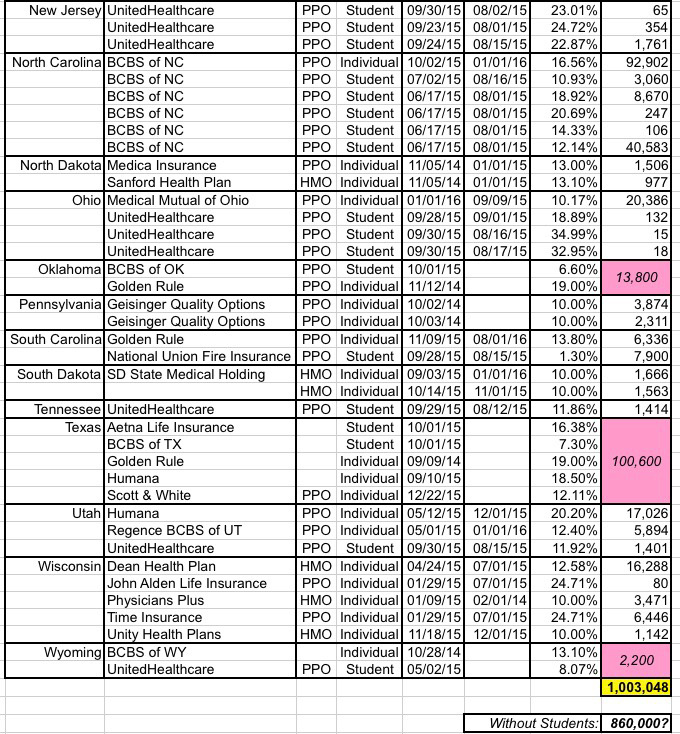 Whew!! OK, to estimate the 5 missing states (in pink), I did the following:

Is this accurate? I'm not sure, but it seems within the right ballpark.

Assuming so, and assuming that I'm not missing any carriers (I think they should all be listed at the RR database through 2016), that means that there's at most 1 million Transitional enrollees left nationwide.

However, the true number should be even lower than that. For one thing, that number includes student policies. I'm not sure whether they're supposed to count here or not, but if you subtract them the number is closer to 860,000 or so.

The bigger issue is that, as I noted earlier, many of the filings are from 2015 or even from late 2014, which means that the data is out of date. Again, Golden Rule's Michigan filing is from 6/26/14, nearly 2 years ago, for policy rates which were set to go into effect on 1/1/15. How many of those 37,530 people have turned 65 (switched to Medicare), gotten a job with benefits (switched to ESI), fallen on hard times (switched to Medicaid), moved to a different state (switched to an ACA-compliant policy) or...well, died? I don't know, but the point is made.

Unless I'm missing some significant transitional enrollment data here, the absolute maximum number of people still enrolled in Transitional policies on the individual market appears to be 1 million at the outside.

UPDATE: Larry Levitt pointed out that carriers requesting rate hikes under 10% weren't required to submit/post those in the past (they're doing so starting this year), which might mean a lot of missing enrollees...except that if you look carefully, there are <10% filings listed in about a half-dozen states above.

Plus, all rate hikes (even those <10%) were posted to the RR database publicly after the start of open enrollment last fall, so I'd imagine the same would hold true for transitional policies? Perhaps not.