Happy Birthday! My premium is gonna go up 3.9% next year no matter what; yours probably will as well, and that's normal.

Amidst all the hand-wringing over how much healthcare premium rates are expected to go up next year, there's one factor which I haven't really mentioned before. I've probably made a passing reference to it here and there, but I don't think I've focused on it prior to this entry.

Old people, generally speaking, require more medical care than young people. This isn't an absolute, of course; there are 60-year olds who can kick a 30-year old's ass, and while younger people tend to be healthier than the elderly, they also tend towards more risky behavior, be it reckless driving, bungie jumping or whatever. Still, the fact remains that there's a reason why insurance carriers lust after so-called "Young Invincibles" so much: They tend to be relatively low-risk and inexpensive to treat when something does come up.

Prior to the Affordable Care Act, many states allowed carriers to charge elderly enrollees up to five times as much for the exact same policy than younger folks...and in some cases didn't have any limit on age-based premiums. Under the ACA, this is locked down at 3x max; a 64-year old can only be charged up to 3x as much for a given policy as a 21-year old.

What this means, of course, is that every year, your premium is going to go up a little bit for the same policy even if absolutely nothing else has changed at your end. Even if you didn't move, have the same dependents, the exact same income, etc, your premium will still go up...and, it's important to clarify, this is true even if the premium for that policy hasn't actually changed one dime.

Thanks to commenter "M E" for prodding me about it again, and to farmbellpsu for providing the source link to explain how this works (I've reformatted the table to make it easier to read).

Keep that in mind when you see your 2017 premiums. If you're asked to pay 10% higher premiums for the exact same policy, the odds are that a good 2-3% of that is simply due to you...being a year older.

Note: I have no idea why this "age curve" table is different for DC, MA, MN, NJ & UT than the other 46 states.

UPDATE: It turns out that in addition to the variances in these states, there are two states (New York and Vermont) where the age curve is not allowed at all (that is, premiums have to be the same for a given plan regardless of age), along with several other state-specific regulations when it comes to smokers vs. non-smokers and so forth. Thanks to commenter InTheKnow for this link. 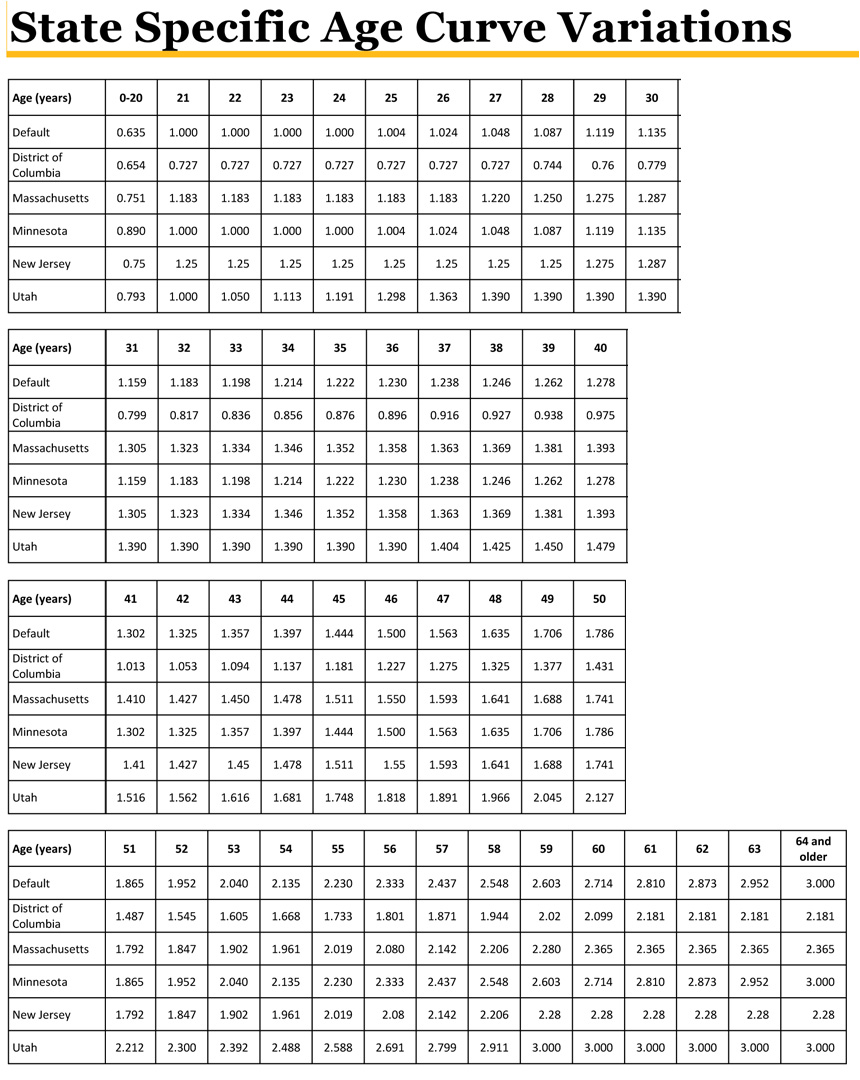