The "based on enrollment" caveat is crucially important; it means that the 13.5% figure has been properly weighted by carrier...which is very nice, because it saves me the trouble of trying to track down the market share percentages.

Nine of the 13 insurers intend to sell individual plans inside the Exchange and four will only sell plans outside of the Exchange. 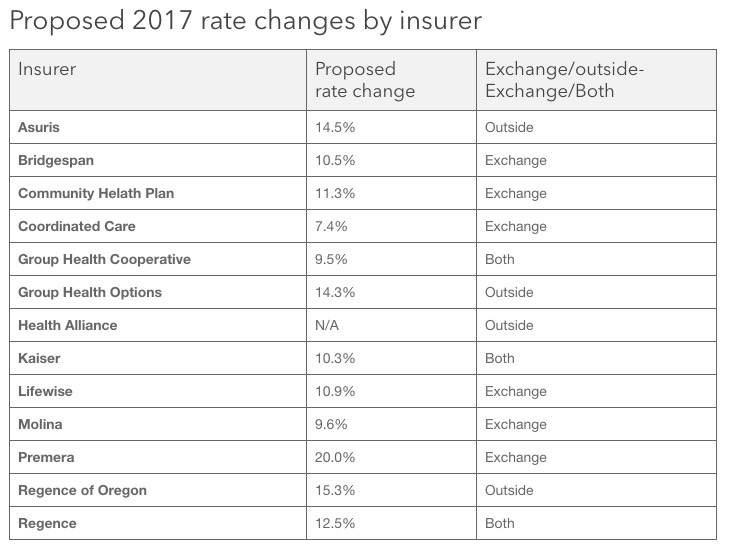 All of the proposed rates, benefits, and provider networks for 2017 are currently under review.

UnitedHealthcare of Washington announced earlier this year that it would leave Washington’s individual market in 2017 and Moda withdrew from the state in January. Both insurers sold plans statewide.

Two other statewide insurers, Premera and Lifewise, intend to stop marketing outside of the Exchange and will reduce the number of counties where they will offer plans.

This is kind of interesting--most of the carriers which have reduced policies have either dropped the state entirely or dropped on-exchange sales; Premera/LifeWise are dropping off-exchange, which is unusual (but actually very helpful for my purposes...my job would be much easier if every state followed Vermont/DC's lead and required all individual/small group policies be sold on-exchange only...

Kreidler’s office does not have the authority to require a company to sell in a particular county.

Last year, more than 72 percent of people enrolled through the Exchange received some form of subsidy to help offset their costs

All individual health plans and their requested rates must be reviewed within 60 days. The review can take longer if Kreidler’s office requests additional information. The Health Benefit Exchange Board is scheduled to certify all plans for sale in Washington Healthplanfinder on Sept. 8.  Open enrollment for the 2017 individual market starts Nov. 1.

How much consumers will pay will depend on where they live, their age, whether or not they smoke, and which plan they select. Last year, more than 72 percent of people enrolled through the Exchange received some form of subsidy to help offset their costs.

Washington Business, the Exchange’s small business marketplace, will only have Kaiser Foundation Health Plan of the Northwest in 2017 selling 11 plans in Clark and Cowlitz counties.  Eleven health insurers will sell 346 small employer plans (1-50 employees) outside of the Exchange.

Kreidler added, “We’re still in the early stages of health reform and insurers are adapting to the new marketplace. Let’s not forget that just four years ago, the standard business model in the individual market was to deny sick people coverage, limit covered benefits, and cap coverage well below what a serious illness would cost.”

“The Affordable Care Act has laid the groundwork for fixing many of the inequities of the old health insurance system,” said Kreidler. “Washington’s uninsured rate has dropped to 7.5 percent and nearly a million more residents have coverage. But there’s much more that we still need to do to address the cost of health care.”

Search proposed rate changes by health insurer and see a summary of what each company says happened over the last year.

Chart of requested and approved rate changes since 2010 (PDF, 121KB)

The chart linked to at the end helps put things in some perspective; it shows the average requested and approved rate hikes for each year since 2010...about 10.9% on average for the 4 years leading up to the ACA exchange policies kicking into place. 2014 doesn't count for obvious reasons. Assuming the 2017 rates are all approved exactly as requested, that would give an average of 6.4% per year over the 3 year period of 2014-2017. I've added in the 2017 requests for comparison: 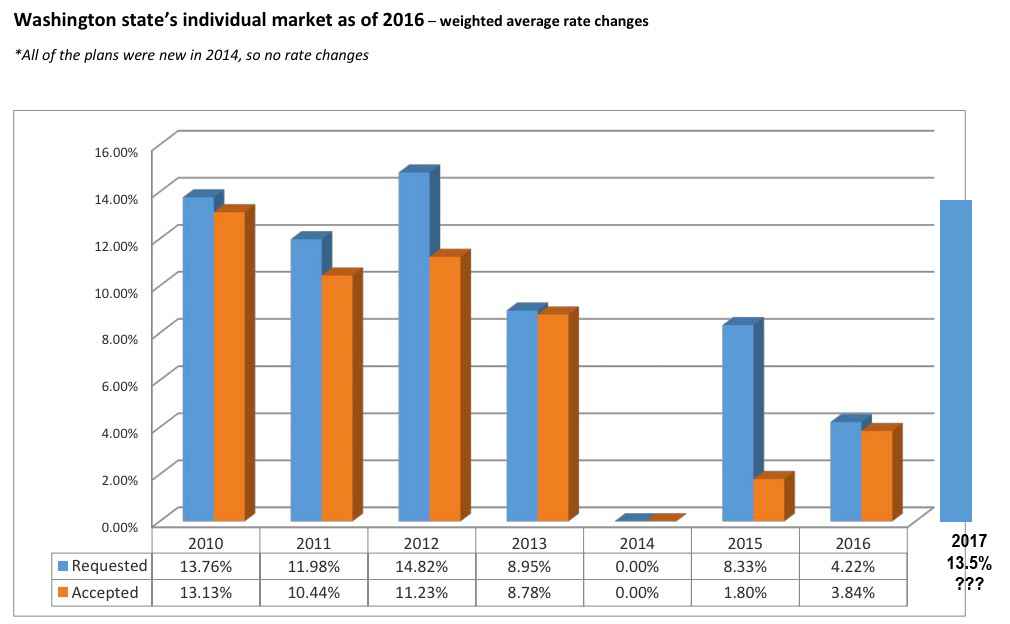