Shorter KFF: No one knows WHAT the hell they want to do with Obamacare. 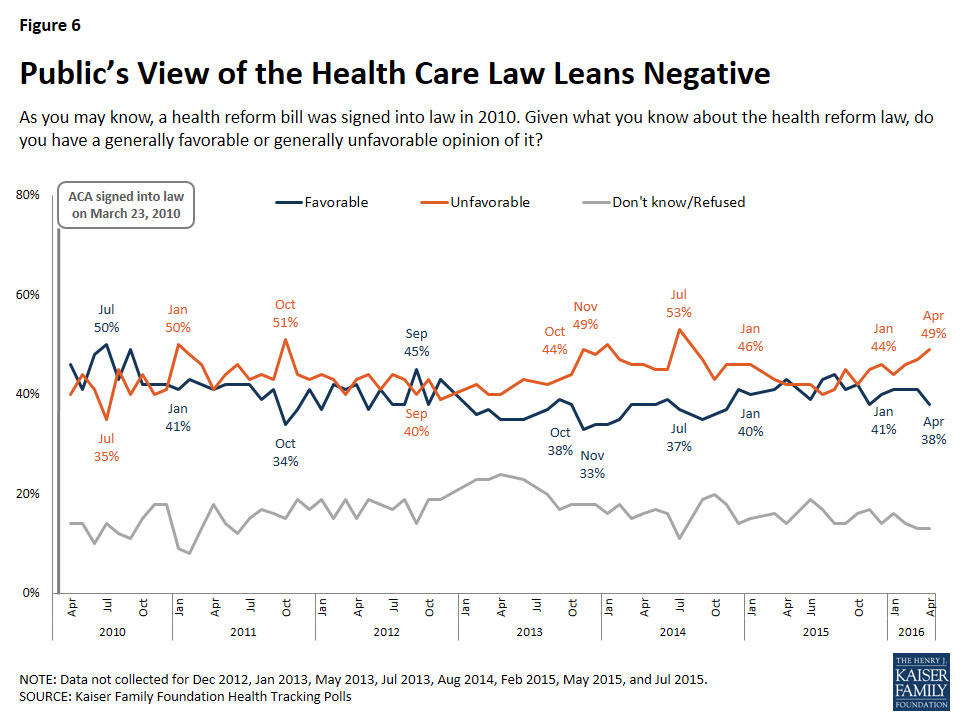 However, as noted by Larry Levitt himself, "This point doesn't get enough attention: As many people want to expand the ACA as repeal it."

He's referring primarily to this question, which asks people what they think the next step should be regarding the ACA. As you can see, 30% say that the law should be expanded, while 32% want it completely repealed. Naturally there's a huge partisan gap here, with 51% of Democrats wanting it "expanded" and 56% of Republicans wanting it "fully repealed": 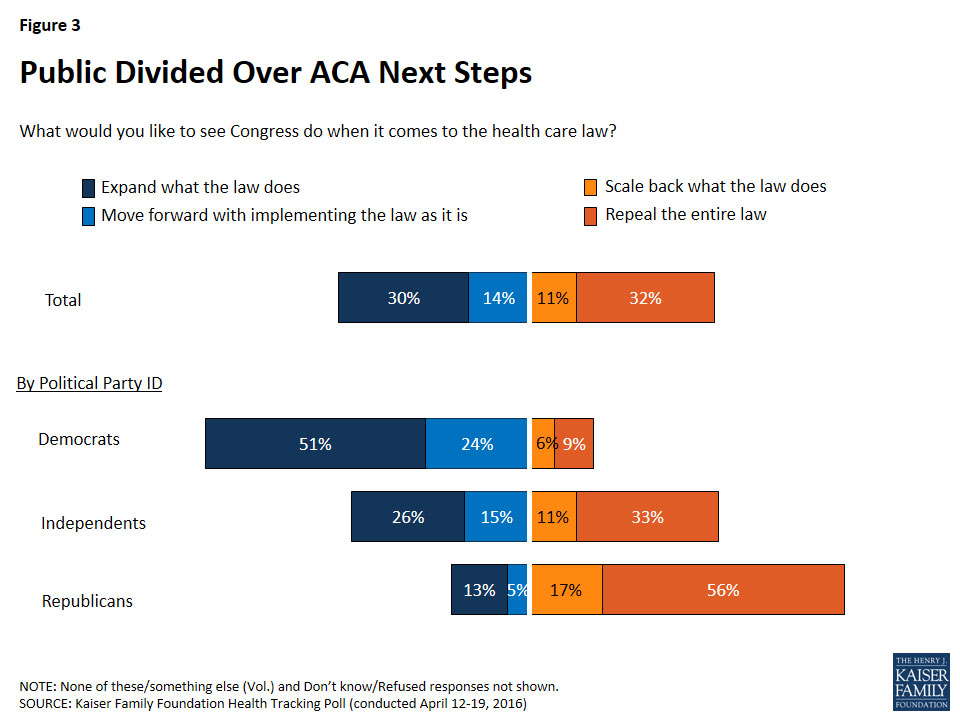 A huge part of the problem with these questions (and this is in no way KFF's fault!) is that most people don't have more than a vague idea about what exactly they're talking about when they talk about either "expanding" or "scaling back" the law or even "repealing it completely".

Other questions on the survey ask the 32% "repeal" crowd (which is mostly GOP-based, but not entirely) what they actually mean by that. Only 12% truly mean that it should be repealed without any sort of replacement. Another 12% want to "replace it with a Republican alternative"...except no one knows what the hell that would actually be yet. The remaining 8% want to do "something else" or admit to not having the slightest idea what they actually mean. 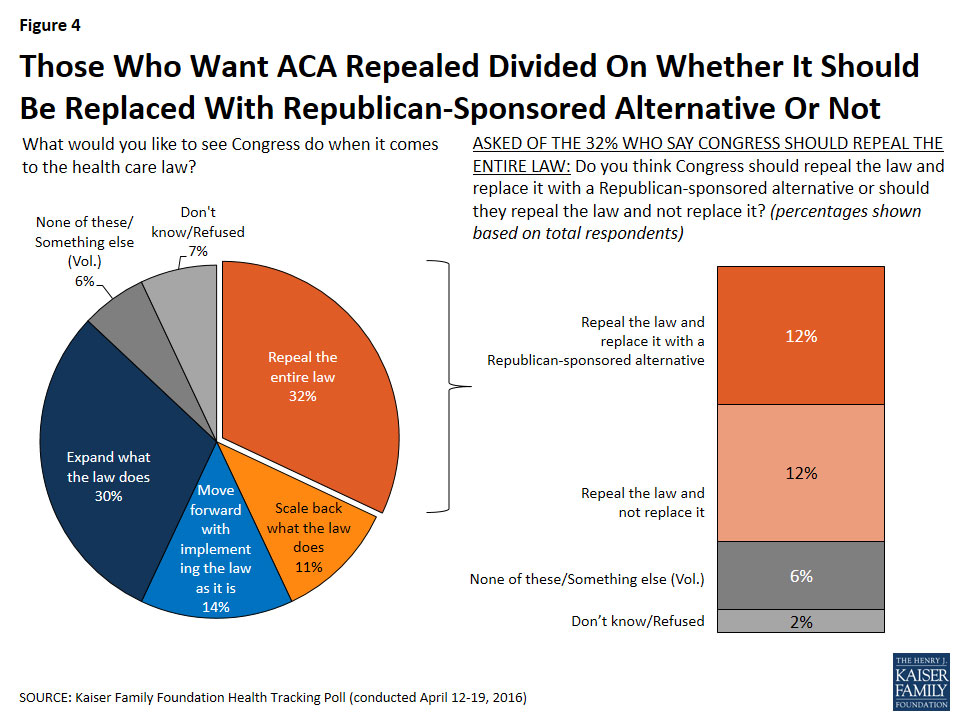 Meanwhile, things are just as murky on the Democratic side. Check out this one...twice as many of the Democrats who supposedly "oppose" the ACA actually want to expand it than want to repeal it, while 13% of them may not like it but are grudgingly accepting of the law as it is. Another 28% say they want to scale it back or don't have a clue what they actually do want done. 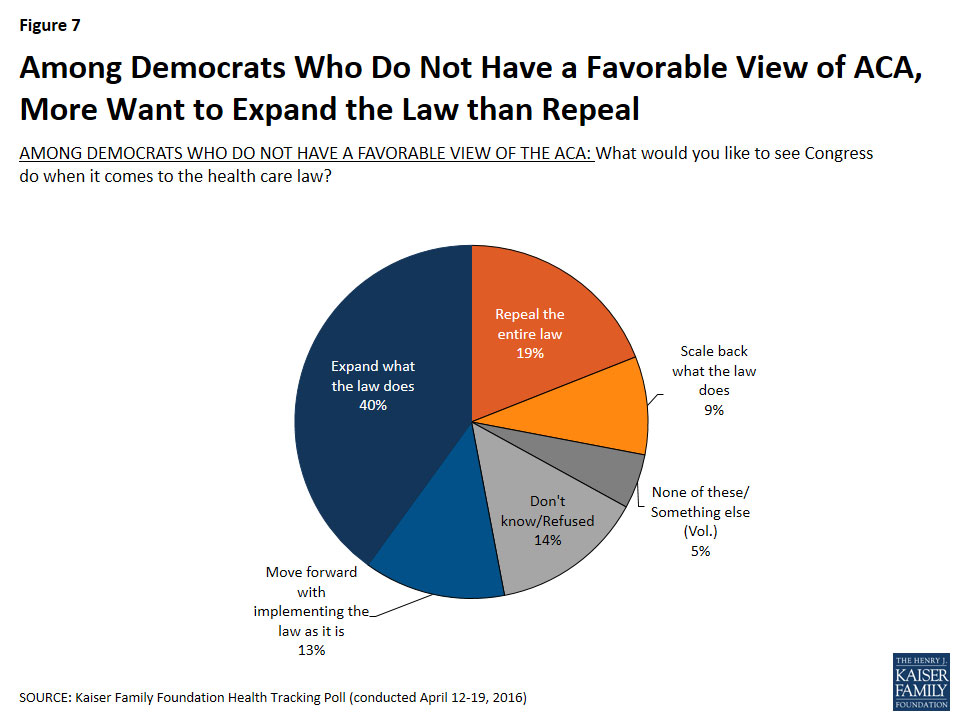 Here's the thing, though: A lot of people (both Republicans and Democrats alike) don't understand the distinction between terms like "single payer healthcare", "socialized medicine", "universal health coverage", "the Public Option", "the Affordable Care Act", "Obamacare" and so forth. Part of this is just the complexity of healthcare and health insurance itself. Part of it is thanks to the Republican Party and FOX News muddying the water by claiming that the ACA is "socialized medicine" etc etc.

I'd be willing to be that a large portion of those wanting to "expand the ACA" and of those saying we should "repeal the entire law" actually want to move towards true single payer healthcare. Or perhaps they mean “Medicare for All”, which would be single payer, but wouldn’t be comprehensive. Or perhaps they mean a hybrid system like those found in many other countries. Or perhaps something else. A big chunk of those saying "don't know" or "something else/none of these" probably mean that as well.

Hell, depending on your thinking process, "scale back what the law does" could mean "scale down the ACA while ramping up single payer".

All of this applies to some portion of independents and even Republicans who say they want to "get rid of Obamacare". Donald Trump also confused the issue last summer (and again more recently) by singing the praises of single payer before changing his mind (and then changing it again, and again...).

The point is that in many ways the Affordable Care Act is sort of like the old saying about art: "I don't know what art is, but I know what I like."

Similarly, a whole lot of people may say they don't like "Obamacare", but few of them seem to understand what the heck it is that they actually do like.