Updated: How many Grandfathered/Grandmothered plans are still around, anyway?

NOTE: This blog entry refers to the individual market only; the small group market is an entirely different subject. UPDATED on 4/18/16.

Back in February, I attempted to do a little back-of-the-envelope math to try and calculate just how many people are still enrolled in grandfathered or transitional (aka "grandmothered") individual policies. As I noted at the time:

The short version is that there were several extensions allowed, ultimately allowing insurance companies to keep these non-compliant "transitional" policies effective until as late as December 31st, 2017...depending on whether the state they operate in allowed the extensions, and if so, through what date. As a result, instead of all 5-6 million of these policies being cut off on 12/31/13, the cut-off date varies by state, by carrier and even by plan. Some states kept to the original 12/31/13 deadline; others bumped it out through the end of 2014, 2015, 2016 or took the full extension through 2017.

However, even in the states which allowed extensions, not every carrier took them up on it. Some did so for the individual market but not small business, or the reverse; some offered extensions for some policies but not others, and so on. Meanwhile, due to the high churn rate on the individual market in particular, many of the people enrolled in the grandmothered plans have moved off of them to other forms of coverage anyway. All of this means that the number of people enrolled in these plans has been steadily dropping, but at different rates depending on the state and carrier, making it very difficult to keep track of how many people are still paying for them.

Anyway, back in February, I only dug up hard grandfathered/grandmothered data for one state (Florida), and even that was nearly a year out of date:

I used this to run a very rough extrapolation nationally, as well as accounting for the additional attrition over the extra year which has passed, and came up with an estimate of perhaps 700,000 Grandfathered & 500,000 Grandmothered policies still in effect nationally now. However, this is a very flawed formula, so I decided to try it again today, attempting to be a bit more methodical about it.

According to Louise Norris over at healthinsurance.org, 35 states are still offering GM plans (I previously thought it was 31)...but with lots of caveats for some of them. I've summarized/simplified her notes below, along with the total population fo each state as of July 2014 (according to Wikipedia). These 35 states represent roughly 63% of the total U.S. population, or 203 million people.

Florida's population represents roughly 9.8% of this total, so a straight extrapolation of their Grandmothered enrollees (165,459 as of 3/31/15) would give roughly 1.68 million nationally...as of a year ago. I'll come back to the "year ago" point in a bit.

Remember that not every state has the same percentage of their population enrolled in these plans, even among the 35 states allowing them. Also, as noted above, not every carrier in every state allowed extensions; I don't even know how many carriers in Florida did so relative to other states, but this is what I have to go on.

Based on Louise's notes, it looks like I can safely scratch Alabama and Virginia off the list, cutting the total population of states with GM plans down to 189.7 million. Again, a straight shot extrapolation based on Florida (10.5%) comes to roughly 1.58 million nationally...as of a year ago. 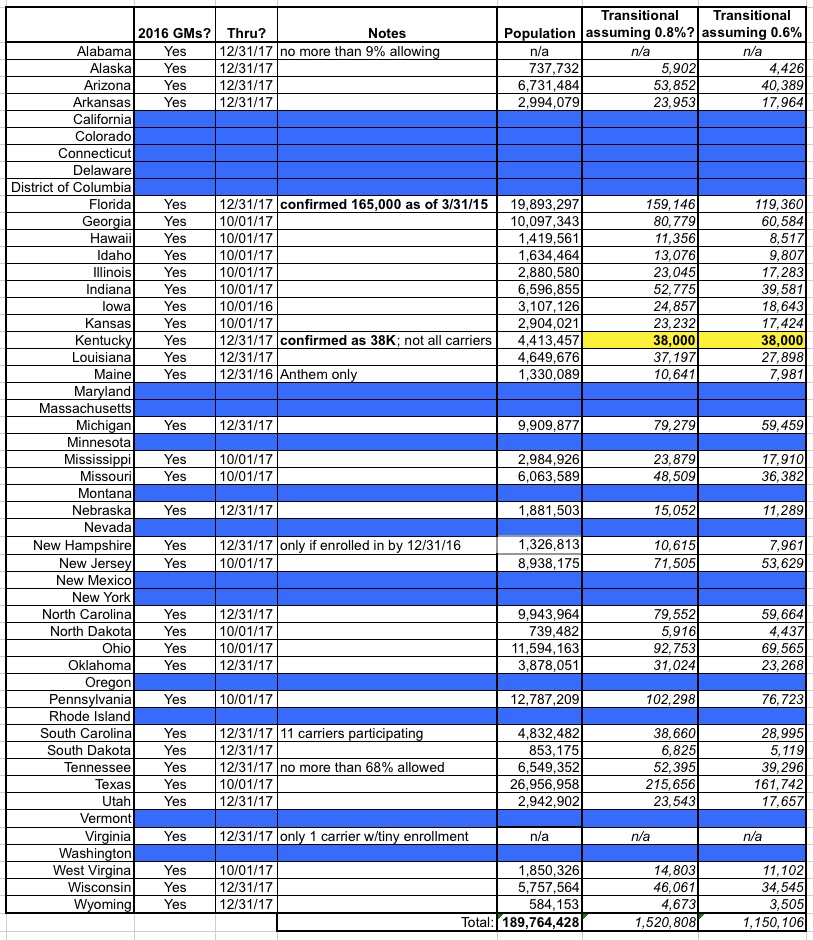 However, that 165K figure in Florida was a whopping 60% lower than it had been just 7 months earlier (409,206 as of 8/31/14)...and it's another year since the 165K figure was accurate. I think it's safe to assume there's been significant further attrition since then...at least 25% or more, I'd imagine, which would bring the national total down to no more than 1.2 million today.

As it happens, just today Norris was able to dig up current GM enrollee data for a different state: Kentucky:

Florida's 165K last year represented around 0.83% of their total population. Kentucky's 38,000 people this year just happens to be exactly 0.86% of their population.

*(Note: Last week I bumped out the high & low ends to 1.0 - 1.8 million, but have reconsidered and narrowed them back down).

As for Grandfathered policies, that's even tougher to figure since I only have the year-old Florida number to go by.

Unlike GM plans, some people are theoretically still enrolled in GF plans in all 50 states +DC. Florida's 19.9 million is around 6.2% of the total population, so a straight proportionate extrapolation of their 87,340 from last March would give about 1.4 million Grandfathered enrollees nationally. Again, assuming at least a 25% attrition rate over the past year, that would bring it down to no more than 1 million current Grandfathered enrollees today. To play it safe, let's call it somewhere between 800K - 1.2 million Grandfathered.

Obviously these numbers are subject to change based on both time and additional hard data.

UPDATE: Thanks to Louise Norris for providing some additional hard numbers out of both Kentucky and Alaska:

Meanwhile, in Alaska, she's dug up their breakout of both Grandfathered and Grandmothered plans (as well as ACA-compliant) in both 2014 and 2015: 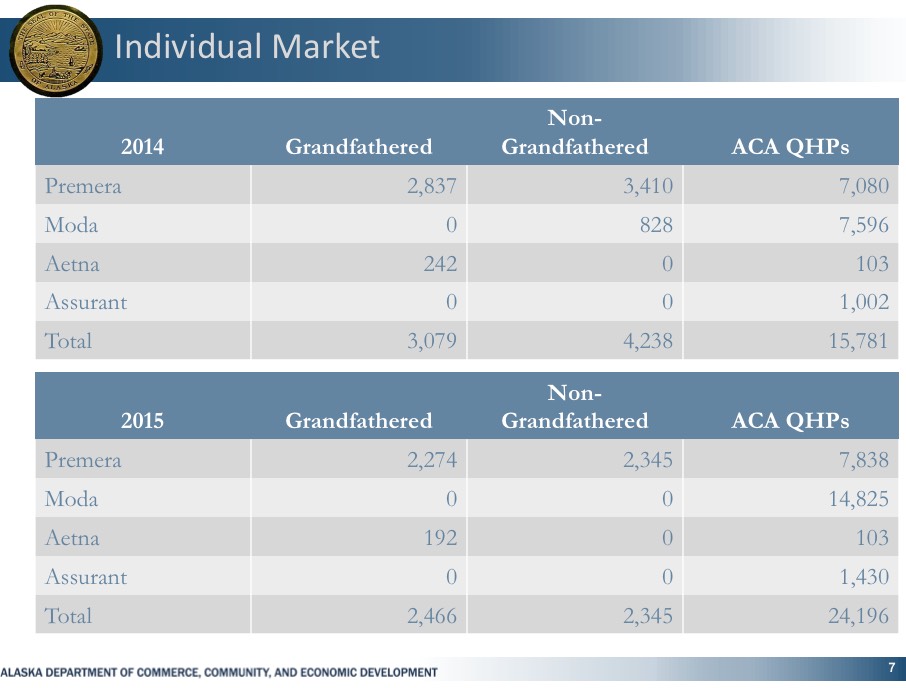 This is all still very rough and extremely incomplete, but it sounds to me like the current national grandfathered enrollment (which applies to every state, remember) should be somewhere between, say, 0.25% and 0.45% of the total population, or somewhere between 800K - 1.4 million...which is pretty damned close to my 800K - 1.2 million range from last week.

As for the grandmothered number, Alaska is down to no more than 2,345, or just 0.32%, which is much lower than I had estimated last week, although Alaska's numbers are so tiny that this could be an outlier, especially given that this number is lower than their grandfathered number (which I haven't found in either of the other, much larger states).

Adding in the Grandfathered columns gives something like this: 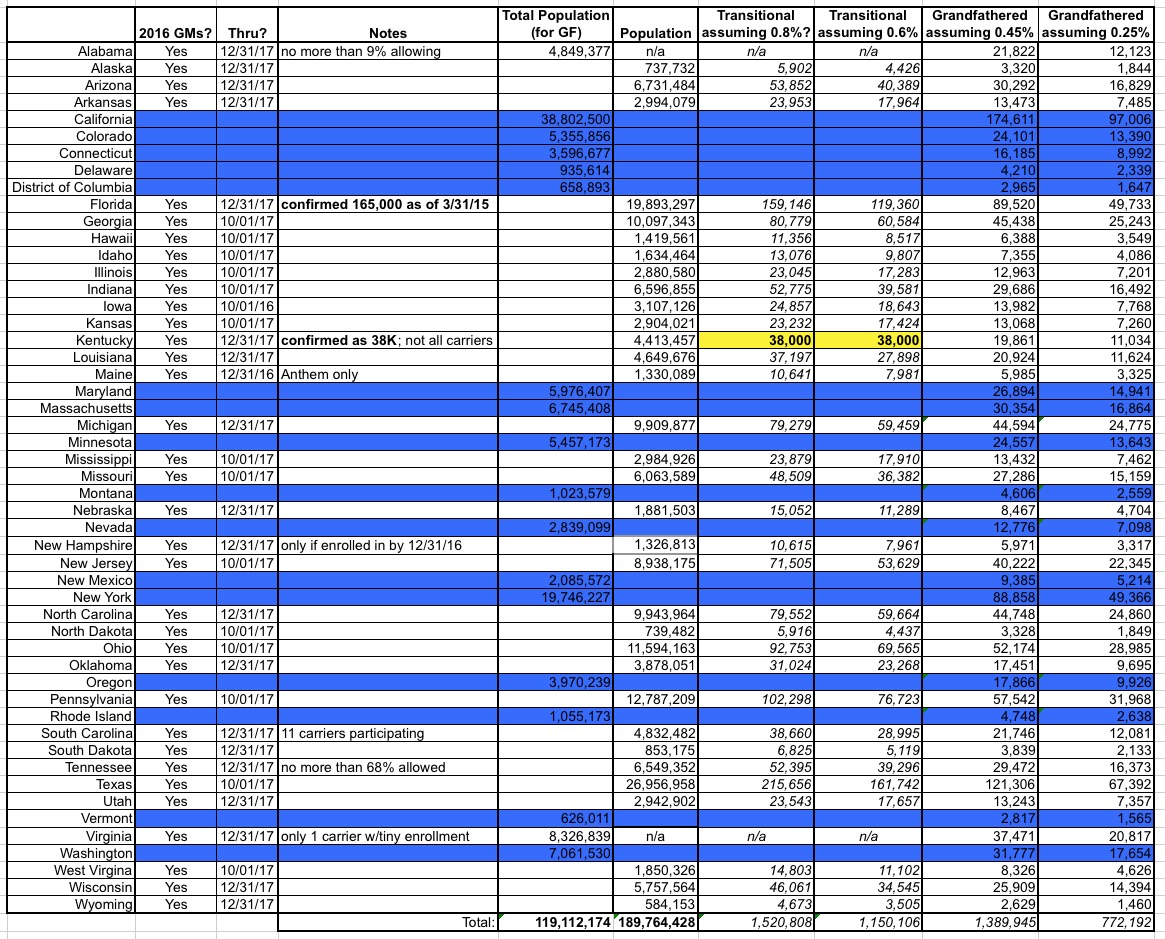