Dear Bernie: Medicare DOES include Premiums, Deductibles and Co-Pays.

Way back in late January, when I wrote a semi-analysis of Bernie Sanders's "Medicare for All" plan, I noted this part:

As a patient, all you need to do is go to the doctor and show your insurance card. Bernie’s plan means no more copays, no more deductibles and no more fighting with insurance companies when they fail to pay for charges.

In my response, I noted that aside from anything else, getting rid of all co-pays and deductible altogether sounded a bit...off...to me. To the best of my knowledge, no other country in the world, even those which have single payer-like systems, cover 100% of everything without any out of pocket expense to the patient...and with good reason. While it doesn't specify anything about "no insurance premiums", that's kind of the core concept of any single payer system, and he specifically says that "all you need to do" is go to the doctor with your insurance card. The "premiums" are, of course, listed as a 6.2% employer premium and a special 2.2% income tax paid by households.

However, I forgot to note one other thing about his plan which puzzled me: The title of the plan is "Medicare for All"...but Medicare, as currently defined, includes premiums, deductibles and co-pays. They are certainly lower than the out of pocket costs of private insurance in many (most?) cases, but they do exist.

Anyway, I didn't think about that too much until this past weekend, when Senator Sanders once again emphasized this point:

Medicare for all means no more copays, no more deductibles and no more fighting with insurance companies when they fail to pay for charges.

This bothered the hell out of me, so I responded, pointing out that unless he plans on seriously reworking not only who is eligible for Medicare but what "Medicare" itself actually entails, this statement on his part is quite simply flat out false.

Medicare is broken into several different parts (A, B, C and D).

Part C isn't really a type of coverage; it's an additional portion of around 17 million people's Medicare plan which allows them to enroll in "Medicare Advantage" plans, which basically outsources management of Medicare right back to...the same private insurance companies which provide most people's health insurance already.

Part D, which "passed ugly" under President Bush but has since been massively improved thanks to cooperation by Democrats, covers outpatient prescription drugs (and is only available via private insurance companies contracted with the federal government).

When most people think of Medicare, they think of Parts A and B, so let's look at the costs (to the actual enrollee) of those:

How much does Part A cost?

You usually don't pay a monthly premium for Medicare Part A (Hospital Insurance) coverage if you or your spouse paid Medicare taxes while working. This is sometimes called "premium-free Part A."

If you're under 65, you can get premium-free Part A if:

In most cases, if you choose to buy Part A, you must also have Medicare Part B (Medical Insurance) and pay monthly premiums for both.

OK, so most people currently enrolled in Medicare Part A probably don't pay any premiums for it...but they generally also have to have Part B as well, which means they do pay premiums.

How much does Part B cost?

You pay a premium each month for Part B. If you get Social Security, Railroad Retirement Board, or Office of Personnel Management benefits, your Part B premium will be automatically deducted from your benefit payment. If you don’t get these benefit payments, you’ll get a bill.

Most people will pay the standard premium amount. However, if your modified adjusted gross income as reported on your IRS tax return from 2 years ago is above a certain amount, you may pay an Income Related Monthly Adjustment Amount (IRMAA). IRMAA is an extra charge added to your premium.

OK, so it sounds like in most cases, people will be paying about $120/month for Medicare premiums. Don't get me wrong: This is an excellent deal, and I strongly support expanding the program...but "low premium" is not the same thing as "no premium". I'm willing to give Bernie a pass on the "premium" part since he does list "premiums" under the tax-based funding portion of the plan and since he doesn't explicitly state "no premiums" in either the plan or the tweet above.

Furthermore, as awesome as Medicare may be, it also (as currently defined) is not comprehensive. Here's a list of what isn't covered by Medicare parts A, B or D:

Even if Medicare covers a service or item, you generally have to pay yourdeductible, coinsurance, and copayments.

Some of the items and services that Medicare doesn't cover include:

In addition, Medicare doesn't cover abortion except in special cases:

Abortions are not covered Medicare procedures except:

If the pregnancy is the result of an act of rape or incest; or

In the case where a woman suffers from a physical disorder, physical injury, or physical illness, including a life-endangering physical condition caused by or arising from the pregnancy itself, that would, as certified by a physician, place the woman in danger of death unless an abortion is performed.

To clarify: I'm not saying that Medicare should cover every single one of these things (minor cosmetic surgery, for instance)...but if you replace all current private coverage and all state-level coverage, the Hyde amendment (which prevents federal funding from being used to pay for abortion except in cases of rape, incest or the life of the mother) means that every other woman seeking an abortion would have to pay the full price privately.

However, your "Medicare for All" plan claims that it:

I'm going to operate on the assumption that Sen. Sanders's plan includes repealing the Hyde amendment as well...which, again, I'd be 100% in favor of doing.

Once again, I'm all for it if it can be worked out and paid for...but stop calling it "Medicare", because "Medicare" doesn't cover all of that at the moment.

I'm aware that this sounds like I'm quibbling over a minor semantic point, but this is an important distinction, and here's why:

Back in 2011, when the Republican-held House of Representatives voted to effectively get rid of Medicare by privatizing it, the following ad was run...

...and House Minority Leader Nancy Pelosi sent out a fundraising email stating that "House Republicans’ vote to end Medicare is a shameful act of betrayal."

In response, PolitiFact, in what I consider a rare misfire*, not only stated that this claim (the GOP voted to end Medicare) was "false", but actually called it the "Lie of the Year" for 2011. Here's their justification for claiming that under the GOP's plan, "Medicare" would still "exist":

At times, Democrats and liberal groups were careful to characterize the Republican plan more accurately. Another claim in the ad from the Agenda Project said the plan would "privatize" Medicare, which received a Mostly True rating from PolitiFact. President Barack Obama was also more precise with his words, saying the Medicare proposal "would voucherize the program and you potentially have senior citizens paying $6,000 more."

The first two of these defenses are, of course, utter hogwash. The fact that it would take 10 years for Medicare to be effectively be wiped out is besides the point; they still voted to do so. It took 4 years for most of the ACA to become effective, but it would be laughable for the Democrats to have said, in 2010, that the law "didn't expand Medcaid" simply because it would take 4 years for that expansion to begin.

The larger point, however, is that Medicare would become privatized. Whether the next day or 10 years later, that was the heart of the GOP vote, and yes, completely privatizing Medicare would effectively destroy it, period...which was the point.

The fact that they would still call such a plan "Medicare" is irrelevant...and PolitiFact was called out on this at the time:

"According to (PolitiFact's) logic, if the FBI were replaced with a voucher program wherein citizens would receive subsidies for hiring private investigators to look into criminal activity, but the agency running the voucher program were still called the FBI, it would be unfair to say that the FBI had been ended," wrote Jed Lewison for Daily Kos. "I guess it's their right to make that argument, but it's transparently absurd."

In a blog post, the DCCC stood by its claim, saying the ad accurately stated Ryan's plan would "abolish" Medicare.

Now, obviously the reason Bernie is calling his plan "Medicare for All" is because Medicare is an extremely popular program. Calling his program "Single Payer" or "Bernie's Awesome Healthcare Plan" wouldn't poll as well, so he called it "Medicare for All". I understand the temptation, especially since I would ideally prefer a single payer-like system.

The problem is that it's also misleading. Calling it "Medicare for All" deliberately implies that it would be the exact same program that's in place now, only available for everyone...as if that's the only change which would be necessary to make it universal.

The thing is, there's already tremendous confusion among many people about the differences between "Single Payer Healthcare", "Universal Coverage Healthcare", "Comprehensive Coverage" and "Socialized Medicine"...when in fact these refer to four completely different issues.

Think of these as X/Y/Z axes (OK, 4 axes, really). "Universal" refers to how many people in the population are covered by a given program. "Comprehensive" refers to what types of services are covered by it. "Single Payer" relates to how the coverage is paid for. "Socialized Medicine" refers to who the healthcare providers work for. There's also a couple of other axes such as "Portability", which is what I'm using as a label for how large the network is of providers who accept the coverage. Here's a little graphic of the first three axes: 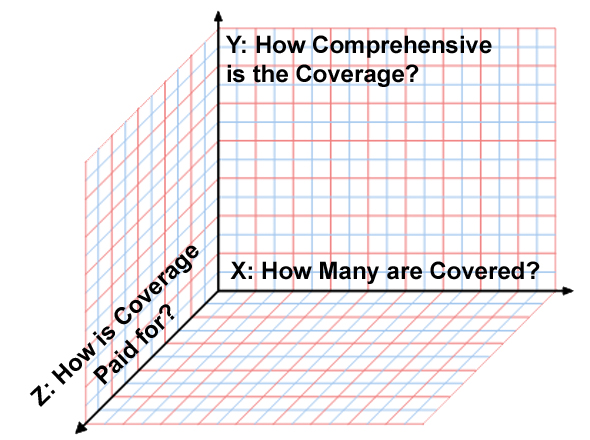 Medicare is not currently universal, nor is it comprehensive, but it is single payer (although, again, it's not even entirely single payer since there are still co-pays, coinsurance, premiums and deductibles, but I'll let that one go for now). It's also pretty much completely portable, since just about all hospitals/doctors take it.

Medicaid is also not universal, but it's pretty comprehensive and generally is single payer. Unfortunately, it's not very portable (ie, many doctors don't accept Medicaid patients since the reimbursement rate is so low).

The Veteran's Administration is (I believe) single payer and is socialized...but isn't portable. I don't know how comprehensive it is.

You get the picture. Every system, private or public, in the U.S. is a hodge-podge of varying levels of each of these axes.

The point is that Bernie's plan, if it were to become enacted as described in his official proposal, may score 100% on each of these axes (except for the "who the doctors work for" one)...but it isn't Medicare.

All I'm asking with all of this is that he call it something else.