No, you can't "blame" the ACA for 29 million people still being uninsured.

A couple of weeks ago, I made a bigger splash than I expected in healthcare journalism/wonk circles by posting my best attempt to piece together the current health insurance/coverage status of everyone in the U.S. (and by "current", I mean "as of March 2016", which includes the results of the 3rd Open Enrollment Period). While some of the numbers/estimates are composites of more than one survey/report and therefore may be off here and there, I've been reassured by various industry experts that overall it seems to be pretty close to the mark.

With that in mind, I wanted to highlight an important point. For some time now, Bernie Sanders has been pointing out repeatedly that around 29 million people remain uninsured despite the Affordable Care Act. This has become one of his core bullet point arguments in favor of his Single Payer healthcare plan which, if enacted, would supposedly cover everyone in the country (more efficiently, with more comprehensive coverage, lower overhead, etc etc).

NOTE: To clarify, I'm not saying that Bernie is the one blaming the law for the 29 million, but I keep hearing a lot of other people doing so. I only mentioned him because instead of touting the 20 million people who the law has helped gain coverage, he focuses almost exclusively on the 29 million that it hasn't. A little balanced perspective is what I'm talking about.

I've stated many, many times that in spite of how unimpressed I am with Sanders's plan itself, in the long term I do think that something like it is our best option. However, for the moment I wanted to take a closer look at the breakout of those 29 million people:

Now, if you want to complain that the ACA is too complicated, pads the insurance carriers's pockets, doesn't keep costs down enough and so forth, those are reasonable arguments.

However, if you're arguing that the ACA is "failing" because it has "only" cut the uninsured rate by about 40% since 2013 instead of down to 0%, that's an absurdly unfair attack for two reasons. First, the ACA itself was never intended to get the U.S. to 100% coverage...nor did anyone ever claim that it would.

Normally, when bringing the Congressional Budget Office into the picture here at ACA Signups, I use their projections from May 2013, since that was the projection report cited by then-HHS Sec. Sebelius for her infamous "7 Million Enrolled via the Exchanges by 3/31/14!!" response to a question about the measure of "success" for the law. However, that revised projection came out 3 years after the law had actually been in place. To compare against what the law was hoping to accomplish, you have to go back earlier.

Here's a letter from Douglas Elmendorf, then-director of the Congressional Budget Office, to then-Speaker of the House Nancy Pelosi from March 20, 2010, just 3 days before President Obama actually signed the Affordable Care Act into law:

Effects of the Legislation on Insurance Coverage

CBO and JCT estimate that by 2019, the combined effect of enacting H.R. 3590 and the reconciliation proposal would be to reduce the number of nonelderly people who are uninsured by about 32 million, leaving about 23 million nonelderly residents uninsured (about one-third of whom would be unauthorized immigrants). Under the legislation, the share of legal nonelderly residents with insurance coverage would rise from about 83 percent currently to about 94 percent.

Approximately 24 million people would purchase their own coverage through the new insurance exchanges, and there would be roughly 16 million more enrollees in Medicaid and the Children’s Health Insurance Program than the number projected under current law. Relative to currently projected levels, the number of people purchasing individual coverage outside the exchanges would decline by about 5 million.

Under the legislation, certain employers could allow all of their workers to choose among the plans available in the exchanges, but those enrollees would not be eligible to receive subsidies via the exchanges (and thus are shown in Table 4 as enrollees in employment-based coverage rather than as exchange enrollees). Approximately 5 million people would obtain coverage in that way in 2019, bringing the total number of people enrolled in exchange plans to about 29 million in that year.

Here's the 10-year projection table at the time: 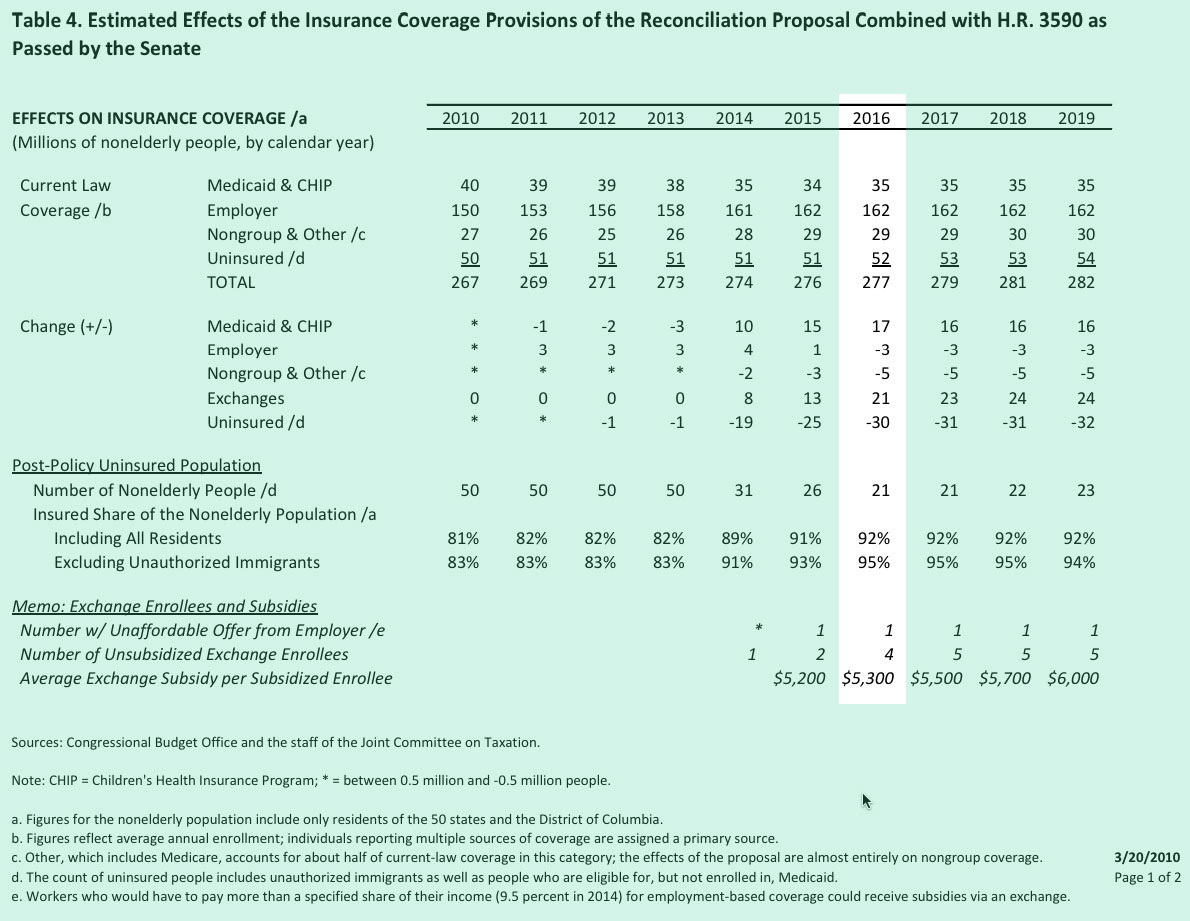 Now, while there are still 3 years to go, the CBO obviously misjudged dramatically on some of these metrics. Instead of 21 million people enrolled via exchange policies, there's only around 11 million. Instead of the off-exchange individual market dropping by 5 million, it's only dropped by about 2.8 million. Instead of employer-sponsored coverage increasing by 9 million (from 150 million in 2010 to 159 million today, or 162 million non-ACA 2016 baseline minus 3 million), it's only gone up around 5 million, to around 155 million total (h/t to Larwit1512 in the comments for the correction), and so forth.

Other numbers have played out pretty closely; for instance, the CBO projected that total Medicaid/CHIP enrollment would increase by around 17 million from 2010 - 2016, and sure enough, that's almost dead on target (54.6 million in 2010; 71.2 million as of December 2015). Of course, while some of these numbers are higher than expected and others are lower, stating whether each one is a "good" or "bad" thing depends on your POV. Yes, it's bad that only 11 million people are enrolled in exchange policies vs. 21 million...but that's in large part because many of those people stayed on their employer-provided coverage or stuck with their off-exchange policies. While that's bad for the exchanges, that's neither good nor bad for the overall coverage picture. Those people are still covered with decent, comprehensive policies, after all.

No, the real measure here is towards the bottom of the report: In March 2010, the CBO was expecting that by 2016, the overall uninsured number (non-elderly only) would have dropped by about 30 million people, to around 21 million total. Add in another 800,000 or so seniors (1.7% of the appx. 46 million seniors today), that amounts to roughly 22 million uninsured expected as of today.

Instead, as of 2016, the uninsured number has dropped by about 20 million, to roughly 29 million total.

However, before anyone starts saying, "See?? That's a FAIL! They missed the mark by 7 million people!!", there's some important points:

Similarly, if you want to argue that we should move from the ACA to Single Payer to make sure 100% are covered, that's a fair discussion (and one which I generally agree with, long-term). However, only around 4.2 million of that 29 million can even remotely be "blamed" on the Affordable Care Act coming up short of it's intended impact.