A huge shout-out to Bob Herman of Modern Healthcare for the heads up on this!!

Back in 2013-2014 when I started this project, the most frustrating data to track down was OFF-exchange individual market healthcare policy enrollments. I tried my best to do so, painstakingly verifying around 560,000 across a handful of states, but with the knowledge that there were at least a few million more out there.

While this may sound obvious now, at the time, there were a lot of people who should've damned well known better, like Avik Roy, who actively tried to claim that the off-exchange individual market was nominal at best, documented in this jaw-dropping Tweet from him:

That tweet led me to respond to him in the single blog entry I'm most proud of here at ACASignups.net, in which (among other things) I noted that the off-exchange indy market was likely to be at least several million, and potentially larger than the 7 million who enrolled on the exchanges, although a good portion of that was still made up of grandfathered & transitional plan enrollments (which do indeed have their own, separate risk pool).

Of course, it turns out I was absolutely correct: The Kaiser Family Foundation later posted their own study which revealed that yes, the total individual market, which had been roughly 10.6 million people in 2013, had grown to around 15.6 million by the end of 2014. Since around 7 million of those were exchange-based enrollees (after subtracting those who didn't pay their first premium), that means that there were around 8.6 million off-exchange enrollments (or 55% of the total). Perhaps 5-6 million of those were grandfathered/transitional, but that still left 2-3 million or so ACA-compliant policies.

It's worth noting that 2 years later, Mr. Roy has yet to apologize for being flat-out, dead wrong about this seemingly obvious data point, but whatever.

Anyway, for 2015, I gave up on trying to lock down precise off-exchange numbers. Very few state insurance departments require carriers to report that sort of data publicly, and even those which do rarely separate out the grandfathered/transitional policies from ACA-compliant ones, so it seemed kind of futile. I did know that as exchange-based enrollments increased, off-exchange enrollments would drop as a portion of the total market, even if the actual number stayed even or increased.

Instead, using the limited data that I was able to cobble together, I came up with a rough estimate: I figured that the off-exchange number would be roughly 80% of the exchange-based total. For 2015, this boiled down to a rough estimate of 8.1 million off-exchange enrollees in addition to the 10.2 million paid exchange-based folks, for a total individual market of around 18.3 million. Again, however, several million of these people were still enrolled in grandfathered/transitional policies.

Finally, for 2016, I dropped the ratio down a bit further to 70%. As you can see on The Spreadsheet, out of the 12.67 million people who selected plans on the ACA exchanges, assuming about 90% pay their first premium, that would boil down to around 11.4 million effectuated on-exchange...and about 8.0 million off-exchange.

As for the grandfathered/transitional factor, I did recently attempt to give a rough estimate of this as well...and concluded that it's likely down to perhaps 1.2 million between them, with the remaining 6-7 million being fully ACA-compliant. I expect the ratio from on-exchange to off-exchange to continue to gradually shift each year, as people move off of the remaining noncompliant policies and grow more comfortable with the exchange-based system.

Well, today, the Congressional Budget Office released a comprehensive report which, along with a ton of other data-wonky stuff, includes the following passage:

BOOM. 9 million people. That's actually about a million higher than I figured, which is fine. The CBO also expects this number to continue to drop a bit more over the coming years, but figures it will likely stabilize because, as I've noted repeatedly:

...the only major reason to enroll via the exchanges is FOR the tax credits anyway, so I've never understood why people expected a huge number of full-price enrollees to sign up in the first place (the exceptions to this are DC and Vermont, both of which require all individual market enrollees to do so via the exchange anyway...but those two combined only amount to a tiny fraction of the national total).

Interestingly, the CBO is now actively breaking out on exchange, off-exchange and the "BHP" (Basic Health Program) enrollment projections as follows: 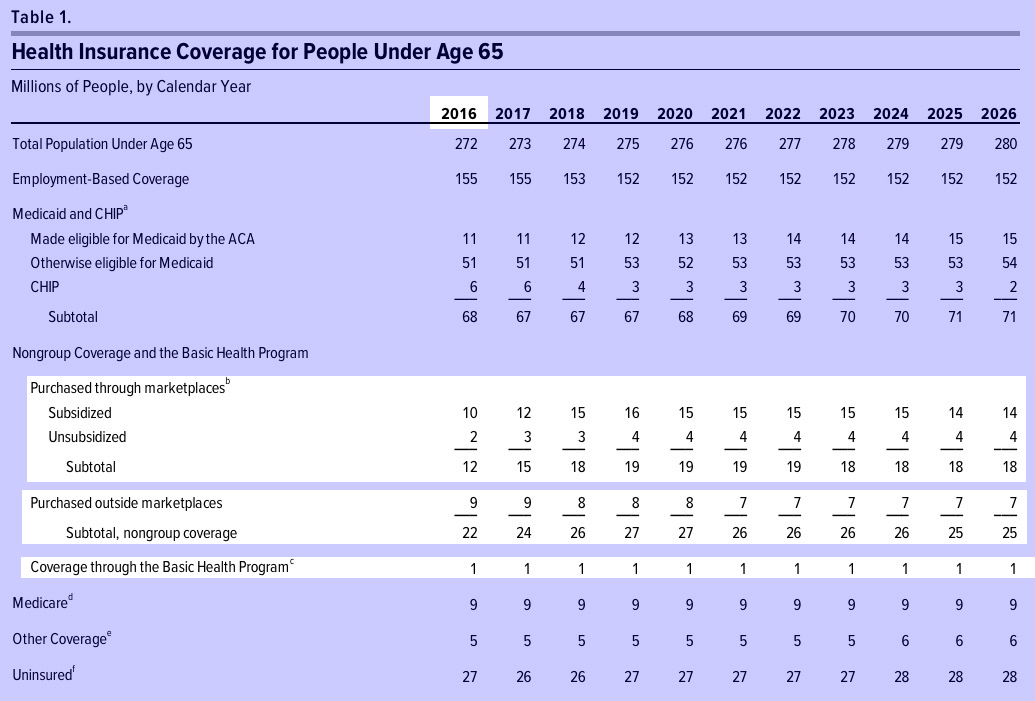 They round the numbers off to the nearest million, so the non-group total appears 1 million higher than adding the numbers would indicate, but they're basically saying that the total individual market ("nongroup") is now up to 22 million this year.

Anyway, there's a whole mess of other numbers to look at in the new CBO report, but for me, this is a huge vindication of what I've been figuring all along. The most noteworthy thing above is that the CBO is now expecting exchange-based QHP enrollment to top off at around 19 million over the next few years. Compare this with their May 2013 projection report (the one with the infamous "Magic 7 million enrollee!" figure):

As you can see, in 2013 the CBO assumed that the total individual market would have increased to 26 44 million by now (22 million on exchange, around 9 million off exchange, 3 million via the Indian Health Service, 9 million non-senior Medicare and 1 million or so student health plans)...but this was partly based on the assumption that 6 million people would move off of their employer-sponsored plans over to the indy market. They figured that about 22 million people would be enrolled through the exchanges.

Cut to today, and note that their estimate of the total individual market hasn't changed at all (still 22 million). In fact, even projecting forward, note that when you include the BHP enrollees, they expect the total indy market to be 27 million people in 2023...only 1 million off from their original projection.

The only difference is that they've finally realized that a good 40% of individual market enrollees are sticking with off-exchange policies. THAT'S the biggest single difference between their 2013 projections and today.

UPDATE: OK, it looks like I misinterpreted the last part above (although it doesn't change the larger accuracy of this post): As noted by Andrew Sprung of Xpostfactoid, the CBO does appear to have accounted for off-exchange enrollees as well; they assumed that without the ACA there would have been around 26 million "nongroup and other" enrollees (ie, off-exchange along with 3 million or so in the Indian Health Service, about 9 million non-senior Medicare enrollees, and another 2 million in student health plans/etc), and that this number will have dropped by 4 million to 22 million this year. If you subtract the other categories, that would leave around 9 million left on off-exchange policies...basically the same 9 million which are now broken out separately. Larwit1512 in the comments also interprets the employer-sponsored projection from 2013 differently than I do, although I'll have to think that part over further.

Basically, it looks like the CBO did indeed simply overestimate how many people would enroll via the exchanges, period, which doesn't change anything else in my analysis.

In any event, none of this changes the fact that Avik Roy was still absolutely dead wrong about the number of off-exchange enrollees being "not a big number" back in March 2013; in fact it was larger than the exchange-based number at the time, and still several million if you're talking only about ACA-compliant policies.