Off-Topic: No, you're not the only one who hasn't seen "Star Wars" yet. (UPDATED)

I finally found time to take my wife and son to see "Star Wars: The Force Awakens" over the weekend. It wasn't perfect, of course, but it was still amazingly good; easily better than the Godawful Prequels, and somewhat better than Return of the Jedi. I'd call it on par with the original (nothing can match Empire Strikes Back, of course).

Anyway, I've seen lamentations from a few people who are under the impression that they're "the only one" who hasn't seen it yet. However, aside from the simple fact that more than one person stating this means, by definition, that they're not the only one, perhaps this will make those folks feel better:

66 million tickets sold in just 10 days is indeed astonishing, and it's obviously shattered/shattering a whole bunch of records.

In addition, presumably a large portion (perhaps 16 million?) of that 66 million went to the same people watching the film a second or third time. If so, that's around 50 million individuals who have seen it so far...or around 14% of the total population.

Put another way, at $8.25 apiece, and assuming 25% repeat-viewers, the film will still have to gross an astonishing $3.6 billion domestically before every person in the U.S. and Canada has seen it ($3.3 billion for the U.S. by itself).

So, for all those who think that everyone else in the country has seen the new Star Wars movie except them, take some comfort in knowing that you're actually not even close to being alone...for the moment.

In the meantime, I plan on seeing it a second time later this week...

In order to break Titanic's record for theatrical tickets sold, Star Wars: The Force Awakens will have to break at least $1.1 billion...which it very well may accomplish, from the looks of it.

And even then, if you subtract 10% for Canadian audiences and about 25% for repeat viewings, you're still only talking about roughly 91 million Americans...or only 28% of the country.

The rest, of course, will presumably watch it on Blu-Ray/iTunes/NetFlix/etc.

UPDATE 1/3/15: According to Box Office Mojo, TFA is up to $740 million as of this evening, or nearly 90 million tickets sold. Assuming 10% Canadian and 25% repeats, that's about 61 million Americans who've seen the film to date, or 19% of the total population so far. 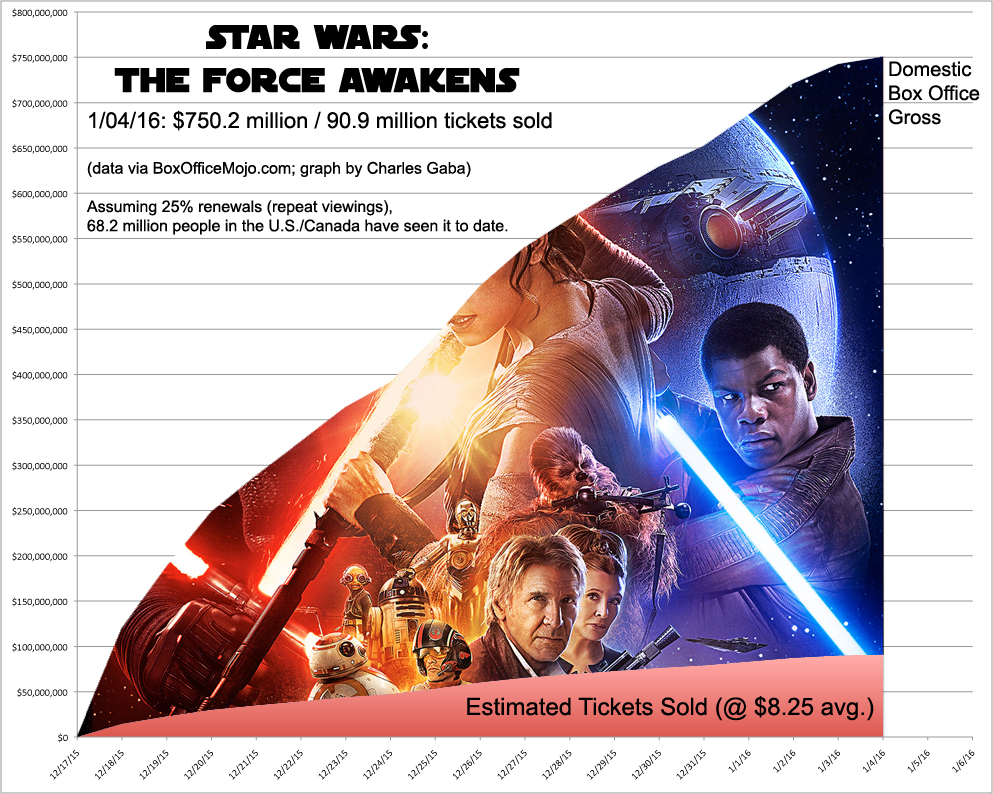