Oh, wait...if you visit the home page of the NY State of Health exchange website, at the bottom you'll find this: 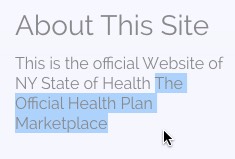 Oh. Um...ok. Well, the article states that his "previous ACA insurer" went "belly-up" last month, so I'm assuming that he's referring to Health Republic of New York, the ACA-created Co-Op which did, indeed, go out of business last month, and whose enrollees had to scramble like mad to find a new insurance provider.

The suit says it seemed like a good option - Fidelis Care claims to cover over one million New Yorkers and its website says customers have access to "more than 67,000 quality providers in our network across New York State."

But the suit says that number is inflated - as he found out earlier this month when he tried to find an ob-gyn for his wife.

A search on Fidelis's website turned up a list of 216 doctors within three miles of his home in the 10003 zip code who seemed to fit the bill.

But when Halpern, 60, took a closer look, he saw the list really only had 30 different doctors on it, "as most doctors appear multiple times with their telephone numbers and addresses repeated."

Halpern says he tried contact "all or almost all of the doctors on the list" and found it was "plagued with errors," including listing several doctors who don't accept Fidelis.

Other doctors' numbers weren't for doctors at all - some of the numbers he called wound up being for a Wells Fargo Home Mortgage Office and the Legal Aid Society.

In all, the list of 216 turned up only eight ob-gyns who accepted Fidelis Care, the suit says.

OK, that is BS, and I very much sympathize with Mr. Halpern here; network/provider directory accuracy is indeed a serious issue...but that was true before the ACA as well.

Halpern says had he known how misleading the list was, he would have gone with another insurance company - and he's switching to a different one in January.

His suit, which is seeking class action status on behalf of people who've been duped by Fidelis, seeks $550 in damages for Fidelis's "misleading" conduct.

I'm actually quite impressed with Mr. Halpern for being so reasonable with his damage request; it sounds like he's pretty much just asking for 1 month's insurance premium, since his January coverage is presumably useless by his/his wife's standards. Refreshing to see that he isn't trying to claim $1 million in emotional trauma, etc etc.

Anyway, I'm fine with the lawsuit; hopefully it'll help prod the carriers into making sure their provider networks are accurate & up to date.

However, aside from the surreal "previous carrier" typo (can you really call it a typo when it's not just the entirely wrong company name, but it's not even a company?), the larger issue is this:

Why on earth is the ACA ("Obamacare") included in the headline at all?

Yes, it's involved in the sense that the Halperns were (apparently) previously enrolled in an ACA Co-Op plan which went defunct...but while I originally assumed that the network directory referred to was on the NY SoH website, it was actually Fidelis' website which had the screwed-up directory...and it's Fidelis who the Halperns are suing, not the HHS Dept or the NY SoH exchange.