Massachusetts: HOLY CRAP ON A STICK. Over 180K QHPs confirmed.

In 2014, Massachusetts' ACA exchange website was one of the biggest disasters of the site rollouts, managing to enroll fewer than 32,000 people while flushing tens of millions of dollars down the drain. The biggest problem was that the system couldn't accurately determine whether enrollees were eligibile for federal tax credits or not...which was kind of important since around 85% of enrollees nationally qualify for them.

This was especially embarrassing given that not only is Massachusetts considered a major technology base (hey, it's right there in the name: Massachusetts Institute of Technology...), it was also, of course, the home of the precursor to the Affordable Care Act, aka "RomneyCare". You can read the entire ugly story in vivid detail thanks to Ed Lyon's amasingly detailed Health Connector Autopsy Report.

Anyway, for 2015, instead of folding up shop and moving home to the HC.gov mothership as Oregon and Nevada did (although they're both ironically considering reversing that decision in the future), Massachusetts decided to start over, and managed to scramble in time to get a new platform up and running within just six months of shutting the first one down.

Given the political and media pressure to get it right the second time around, the MA Health Connector went so far as to issue daily enrollment reports for the 2015 Open Enrollment Period...transparancy which bewildered even me (I'm fine with weekly reports, guys, really...). In the end, the new system was a huge success: Over 144,000 QHP selections during open enrollment, or over 4.5x as many people; an amazing comeback story. Even Ed Lyons, the Autopsy Report guy (and a Republican activist, I should note) was impressed.

So, that brings us to the 2016 Open Enrollment Period. Buoyed, no doubt, by their success last year, the exchange decided to relax a bit this year, and have curtailed the daily updates. In fact, in my opinion they've relaxed a little too much, having reverted all the way back to monthly reports instead (again, weekly is what I'm looking for here, guys...)

However, since their monthly board meetings take place mid-year, the only number I could glean from their November meeting was 4,027 QHP selections in the first week, of which 1,477 were "actively enrolled for 2016". That's not terribly helpful now that we're into the 6th week, but until today it's all I had to go with.

As I said, their 2015 Open Enrollment total was just over 144,000 (actually 140,540, according to the official HHS Dept. ASPE report; there are sometimes minor discrepancies between the state and federal reports due to clerical glitches or timing overlaps). Still quite impressive. For 2016, the MA exchange itself never really issued any sort of official enrollment target, and the state's uninsured rate is already one of the lowest in the country, so I took a middle ground: I assumed roughly a 17% bump year over year, or around 165,000 for Massachusetts during OE3.

Well, guess what came out in this morning's December board meeting? 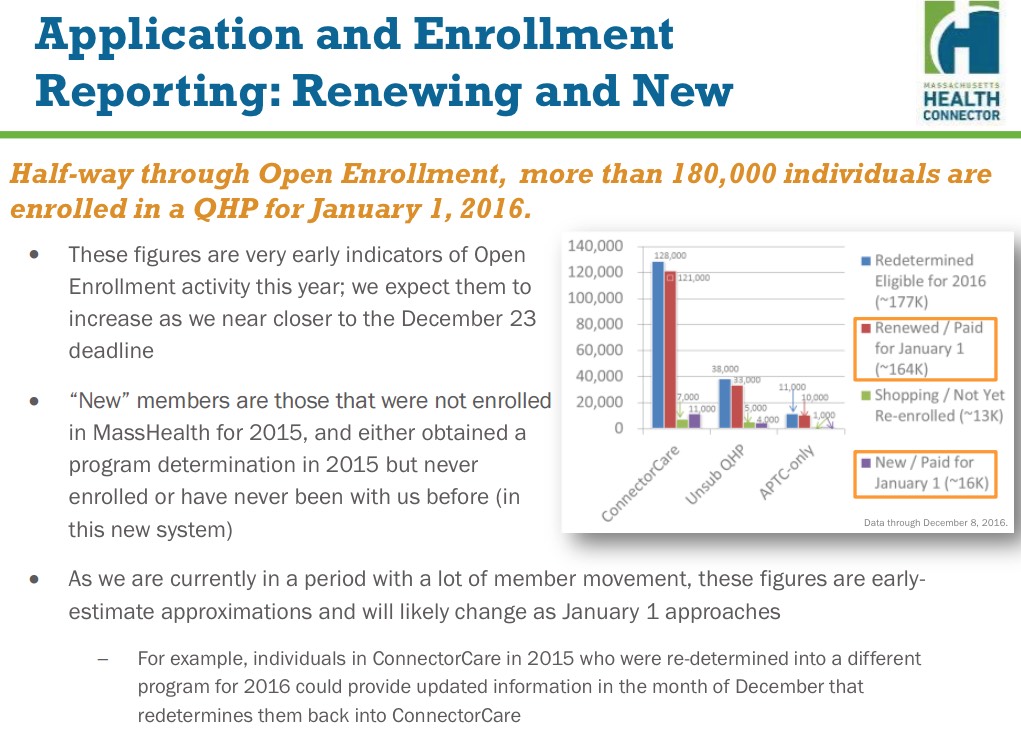 Yes, that's right: Over 180,000 Massachusetts residents have already been enrolled in exchange QHPs for January 1st coverage...and as you'll see below, this appears to only run through the end of November (although I'm not 100% certain that the dates on the slides above and below quite match up, not that it matters that much).

Now, there is one important caveat here: Like Connecticut, Rhode Island and Washington State, this number already includes auto-renewals, who have onece again been "front-loaded" into the system. As noted in the slide above, that number could drop to some degree if some current enrollees decide to take a pass on 2016 coverage. However, the numbers from Rhode Island so far seem to indicate that this is a fairly small number; I wouldn't expect it to drop by more than a few thousand at most. More likely it will involve those auto-renewed shifting into a different QHP, which doesn't change the total number at all.

In any event, in one shot, Massachusetts has managed to surpass my 2016 enrollment period projections for them by over 9%...with over half the period left to go, and with 2 weeks left before their December 23rd deadline! (remember, unlike most states which have a 12/15 cut-off, Massachusetts is allowing enrollments up through 12/23 for January coverage).

Now, this does not mean that they're going to end up doubling or tripling my projections; again, as you can see in the slide above, over 90% of the 180K is from renewals. According to the Kaiser Family Foundation, MA only has around 288K uninsured remaining total, and after subtracting those who qualify for Medicaid, undocumented immigrants and so on, I figure they only have about 180,000 uninsured state-wide who are even eligible to enroll. Still, I could easily see them hitting perhaps 200,000 total under the circumstances.

So, how the heck did they manage to renew 164,000 people when only 140,000 (or even 144,000) even selected plans for 2015 in the first place? SImple: I forgot that unlike other states, Massachusetts allows year-round enrollment in their special "ConnectorCare" exchange policies. These policies for lower-income residents, which include additional financial assistance from the state instead of the federal government, still qualify as QHPs as far as the HHS Dept. is concerned and are therefore counted towards the total. And according to the MA exchange monthly reports, this has caused the cumulative effectuated numbers to continue to climb steadily almost every month since Open Enrollment ended in February...to the point that as of the end of November there were 180,390 people enrolled in active, effectuated QHPs: 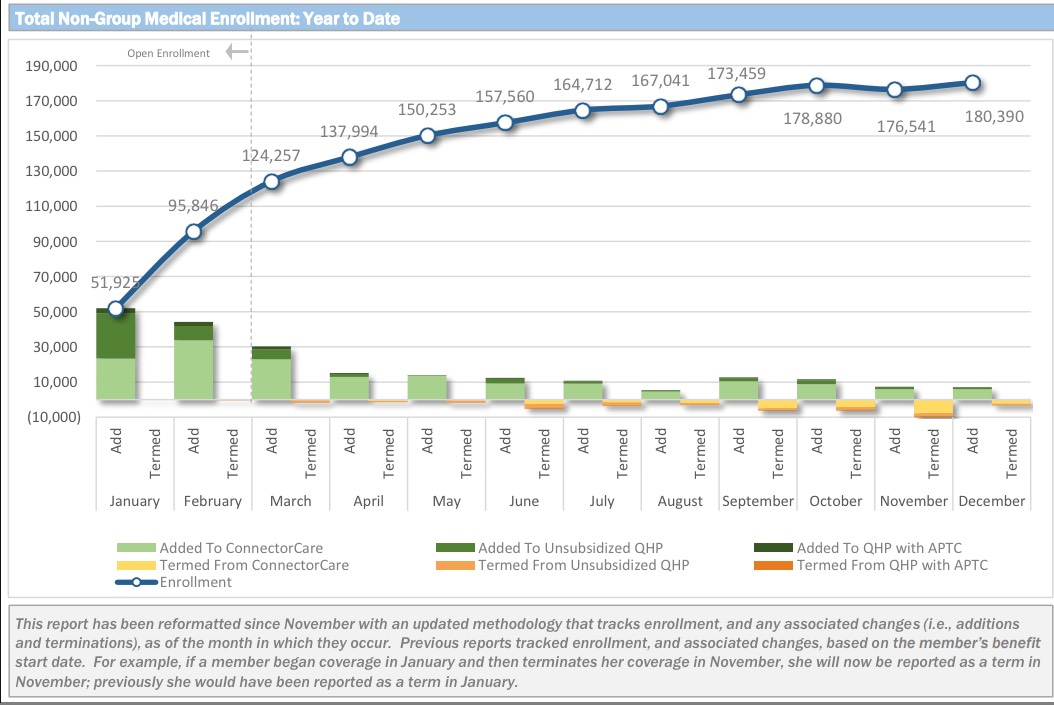 So, what does this all mean? Well, for one thing, it means I can instantly bump up the confirmed national total by an additional 176,000 (remember, I already had around 4K accounted for), bringing the grand total to nearly 3.44 million confirmed. For another, MA just went from being barely visible on the State-by-State Chart to nearly shooting off the page.

This doesn't prove anything nationally, but it's certainly a positive sign for Massachusetts.