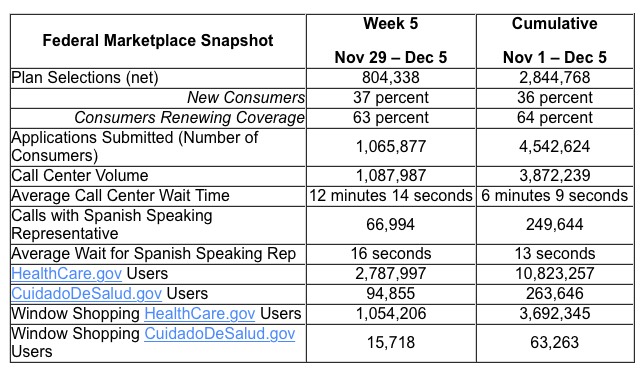 Aside from having come within 4.4% this week (I overshot slightly this time...840K vs. 804K), there's some other important data points here.

First, notice that the number of new enrollees broke over 1 million as of Saturday (around 1,024,000), an important milestone in a year where adding new people to the tally is expected to become increasingly more difficult.

At the time, they were just trying to point out that current enrollees are more engaged/likely to actively renew than last year, when it was only "in the teens" percentage-wise at this point. However, this "1/4 have renewed already" tidbit tells me something else that's pretty important.

Since HC.gov makes up roughly 76% of all ACA exchange enrollees, that in turn suggests that nationally, there should be roughly 9.4 million people still enrolled in effectuated policies...which, as it happens, is right in between my projection of 9.7 million and HHS's official projection (which they've stuck with since over a year ago) of 9.1 million. This also pretty much splits the difference between the evidence from 8 state exchanges (suggesting the number is still very close to June's 10 million) versus that from 8 major insurance carriers (which suggested the number had dropped to 9 million or below).

Without knowing the currently-effectuated numbers from large state-based exchanges like Covered California or New York State of Health, I can't be certain of this, but the September data from 8 other state exchanges had it virtually even with the June figures, so unless CA and NY had substantial attrition since then, I think I'm on pretty safe ground here.

Like last week, here's the year over year comparison (again, not quite apples to apples since Open Enrollment started 2 weeks earlier this year, but still significant since the deadline for January coverage has not changed:

They also noted that over 2 million people have utilized HC.gov's new features ("Total Out of Pocket Cost"/"In Network Lookup") so far.

At the state level, CMS gave out a few specific numbers, which are laid out in more detail in the actual snapshot report:

Beyond that, a few other tidbits:

OK, here's the actual state numbers...again, more later this afternoon when I get back: